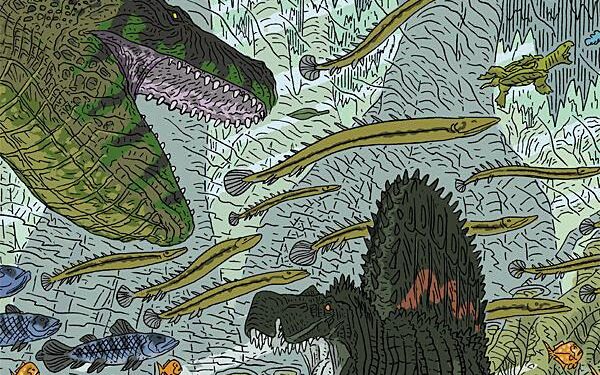 For a primarily visual medium, it’s surprisingly rare to find examples of truly excellent sequential storytelling that stands on its own. Many artists – including a good few big name ones – rely on static art, unimaginative poses, copied and pasted panels and even downright tracing to tell the story. The result is that the art takes a backseat to the dialogue, and what should be a visual story ends up getting told mainly through exposition. What happens when you take away the crutch of being able to use dialogue to hide uninspired art? Would most comics be able to evoke what’s going on well enough simply through the strength of their visuals?

This is exactly the challenge that writer and artist Ricardo Delgado sets himself in Age of Reptiles: Ancient Egyptians. The book features no dialogue at all. And just to ramp up the toughness from Hard to Extreme Mode, it’s about dinosaurs.

Issue 1 follows a Spinosaurus (yes, I had to google what kind of dinosaur it was) as it does, well, dinosaur stuff. It eats fish. It wanders around the primeval earth, staring at other beasties with its beady little eyes. It starts beef with a violent gang. You know, the usual.

Delgado pulls off something quite special. He was a storyboard artist on The Incredibles and Wall-E, and it shows. His sequential storytelling is brilliant. He does more with pure visuals than many creators pull off with both dialogue and art at their disposal. These aren’t anthropomorphised Disney dinos. No, these take visual cues from real life, rendered in palettes of green, brown and blue. Despite this, Delgado manages to infuse them with just enough expressiveness to give them distinct personalities while retaining their reptilian alienness.

The comic manages to hit all of the same beats as the first act of a Clint Eastwood western: a tough drifter gets dragged into something he wants no part of. The other main dinosaurs are evocative enough that you stop seeing them as dumb animals and start seeing them as part of a cast of characters.

And, just in case I haven’t mentioned it enough, this is all expressed without the use of any narration or speech bubbles whatsoever. This is comic book storytelling pared down to its core, and the quality shines through.

The book is not for everyone. It’s slow-paced and resembles a David Attenborough nature documentary more than it does the average comic book. If you’re mostly into superheroics, great dialogue or even just need your comics to have an overarching point, this might not be your cup of tea.

If, however, you’re a fan of great art, fantastically-drawn dinosaurs or enjoy comics that push the limits of what the medium can do, Age of Reptiles: Ancient Egyptians is rewarding. Books like this prove that the art of sequential storytelling in comics is far from being extinct.