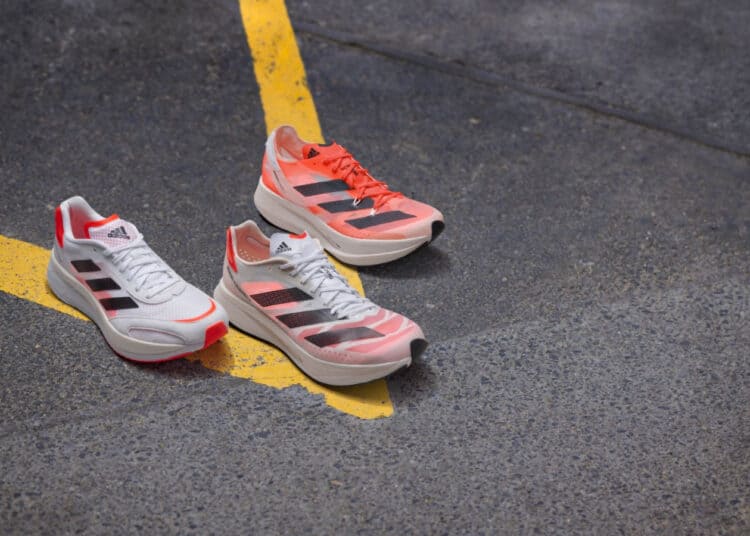 Towards the end of 2020, adidas introduced its new adizero adios Pro runner. The shoe changed the landscape of long-distance running, setting multiple records along the way. Fortress had first-hand experience with the runner, which lived up to the global hype. Now, adidas has revealed the evolution of the shoe, introducing four new silhouettes in the process. This includes the adizero adios Pro 2, the adizero Boston 10, adizero Prime X and the Avanti Track Spike. 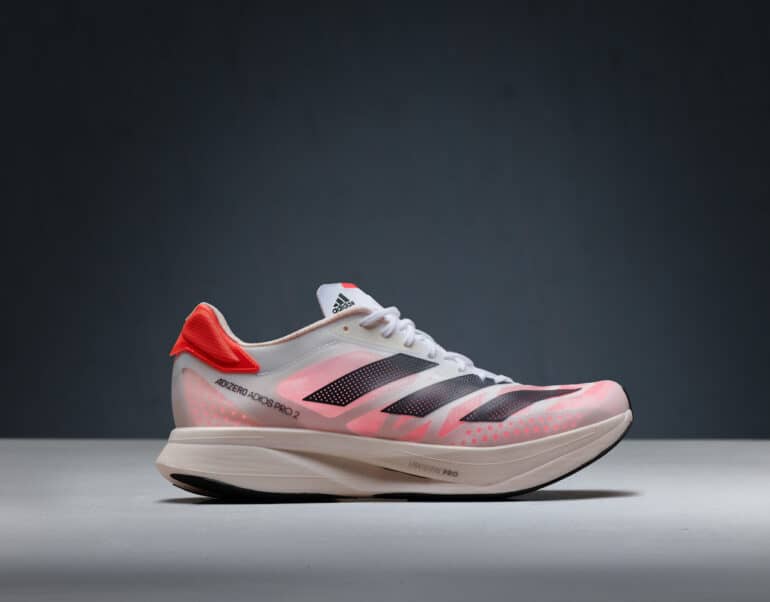 In the first season after its release, the adizero adios Pro broke multiple records. This included Peres Jepchirchir’s half marathon world record, which she broke twice in the running shoe. In addition to this, Kibiwott Kandie broke the men’s record, taking 29 seconds off the previous record he himself set.

In order to keep the momentum, adidas has taken these results and seeking to improve upon what it started with the shoe. Improvements were made with the support from athlete data and inputs from them directly. The new shoe is lighter overall while featuring two layers of its LIGHTSTRIKE PRO midsole. This includes a revamped construction, which allows for greater energy return.

One of the key aspects of the original was its carbon ENERGYRODS. A portion of this is now visible beneath the midsole, which provides lightweight stiffness. As a result, it produces are more anatomical driven transition, which reduces energy loss.

The midsole has also been redeveloped. It features an even lighter material, along with partially recycled polyester, CELERMIESH 2.0 upper. This provides greater flexibility and breathability.

Missing from the original, adidas has added the Continental Rubber outsole to the adizero adios Pro 2. This is placed on the toe tip to create a traction zone to support better acceleration.

A newly constructed heel has been lightened while keeping the foot tightly locked in. It has also been softened to increase comfort in each stride. 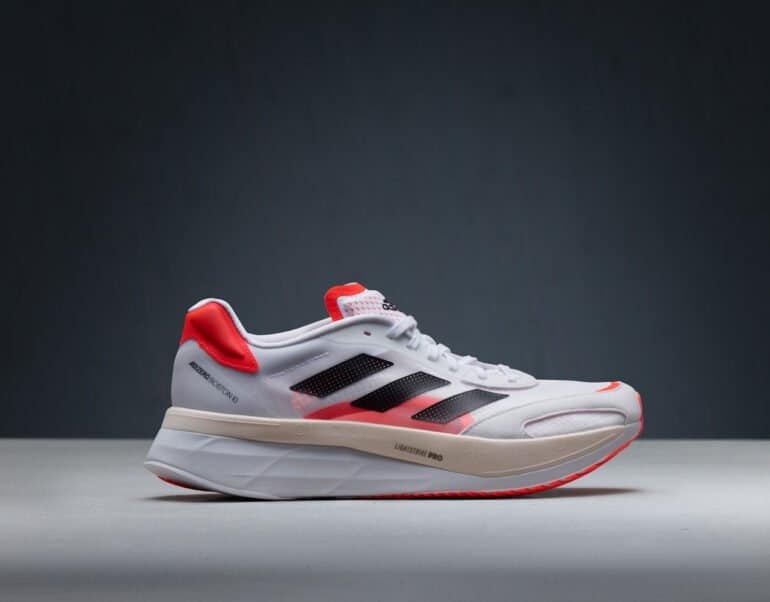 The Boston 10 adds to the adizero heritage with a design evolution. It offers runners the best of the adizero adios Pro 2 runner, in a more versatile, everyday approach.

It features the same ENERGYRODS technology in the midsole. Additionally, it also includes the LIGHTSTRIKE PRO and LIGHTSTRIKE EVA foam. To create its lightweight construction, it has a soft upper finish. And for that added traction, it sports the Continental rubber outsole.

Each of these elements is carefully crafted together to support everyday running and training with a more durable and lightweight ride. 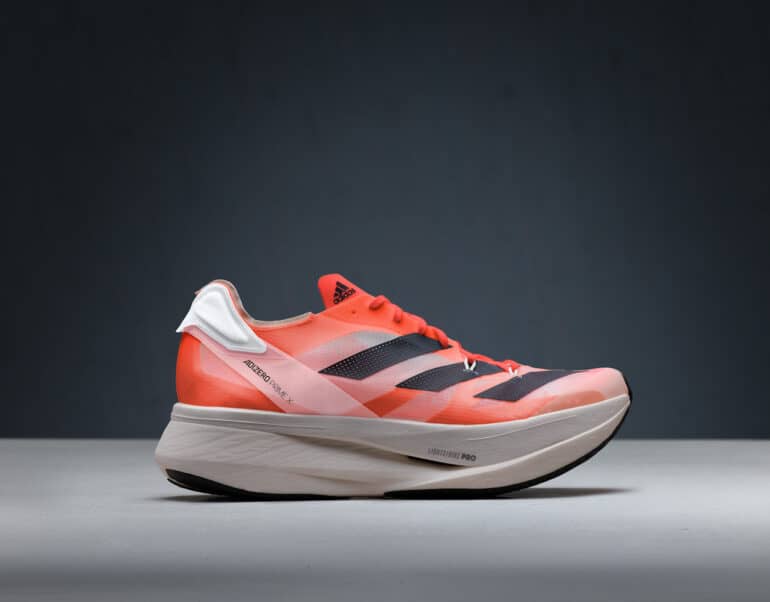 The adizero Prime X is the top of the range runner from the pack and was designed as a boundary-breaking conceptual long-distance running shoe.

It includes all the elements that make the adizero adios Pro 2 great and expands upon this, pushing the limits of modern technology. It features the same LIGHTSTRIKE PRO midsole and CELERMESH 2.0 upper.

The Prime X also includes the same ENERGYRODS technology but with slight adjustments to bring out more overall performance. The blades are stiffened, which spring back. Additionally, the midsole that houses them features a 50mm heel. 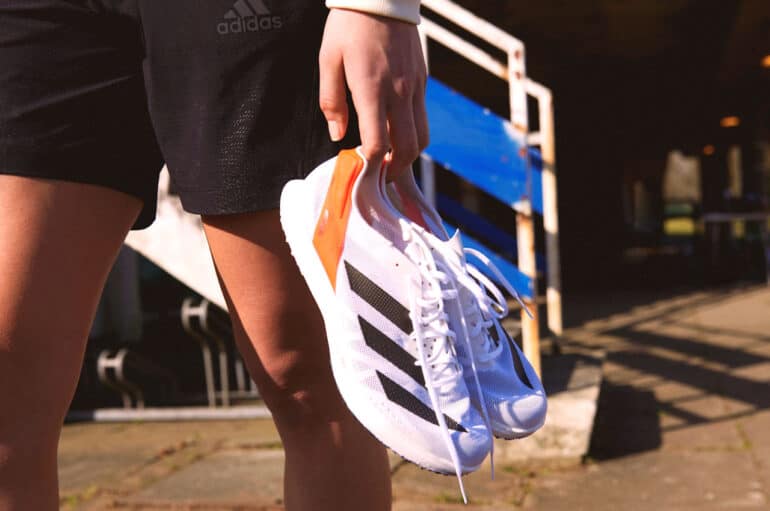 To round off the collection, adidas has included an all-new Avanti Track Spike. It was designed to bring record-breaking road running to the track. This includes entries for the 5km and 10km races, tailored for speed.

It retains the ENERGYROD technology. However, it has been redesigned for the track surface by switching from carbon to a glass fibre composition. As a result, it ensures the stiffness in each stride with flexibility for the track.

In addition to this, a SLINGLAUNCH heel has been added to the rear of the shoe. This was inspired by rock climbing shoes to lock in the foot. This creates a secure and anti-slip fit in each stride.

The Avanti Track Spike was designed through regular athlete input data. These were observed during training camps where mechanical, biomechanical and physiological data was captured.

Each of the four silhouettes feature a simliar design and colourway. Colours include white, carbon and solar red, with different styles and detailing to make each unique.

The Avanti Track Spike won’t be available in stores, but will be worn by some of the world’s fastest athletes this season and at the Olympics. Athletes include the likes of Rhonex Kipruto, Nicholas Kimeli and Muktar Edris.

The rest of the adidas adizero adios pack will be available online at adidas.co.za, as well as in select adidas concept stores. Pricing for the running shoes will be as follows: adizero adios Pro 2 at R4,499, adizero Boston 10 at R2,999 and adizero Prime X at R5,499.