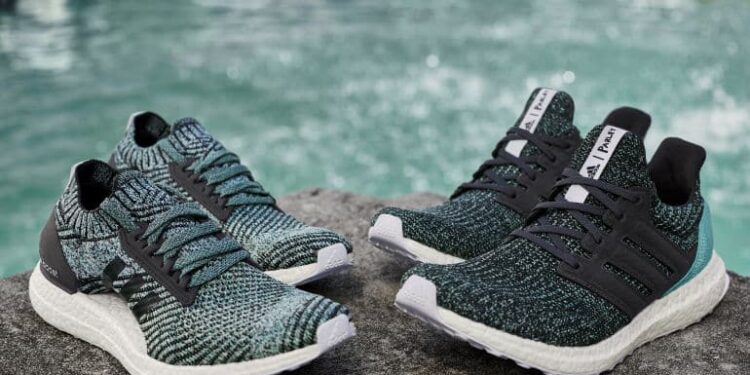 Ever since the first recycled sneaker rolled off the production line in 2016, the collaboration between adidas and Parley has intercepted thousands of plastic bottles from destroying ocean life out at sea. As part of the long-term drive to produce 1 million pairs of sneakers across the globe, adidas and Parley have partnered with FC Barcelona goalkeeper Marc ter Stegen for the release of the all-new silhouette, the limited edition adidas UltraBOOST Parley, in a continued effort to raise awareness of the threat of marine plastic pollution. Each pair of Parley sneakers is produced from 11 plastic bottles intercepted before being carried out to sea. This is high performance with a higher purpose. Last year we saw Wayde Van Niekerk run in the world’s first Parley Running Spike at the IAAF games.

The updated UltraBoost silhouettes, the UltraBOOST Parley and UltraBOOST X Parley silhouettes, were inspired by the dark blues and greens of the urban harbour, and fuse performance-oriented footwear technology with progressive eco-innovation. The new runners will see a limited edition release across the globe, and feature a Primeknit upper, which consists of 85% Parley Ocean Plastic. The Parley plastic itself is made of an innovative material created from upcycled waste before it enters our oceans. The midsole is made from industry-defining Boost technology, made with sustainable materials, and delivers responsive comfort and cushioning that energizes from the ground up. As with the previous UltraBoost sneakers, the Parley edition features Continental Rubber, made from natural materials, and providing a smooth and flexible ride, whether you’re running or walking, along with advanced grip in all conditions. In addition to the recycled materials used within the manufacturing of the shoe, adidas has also included additional education and purpose, which uses a seamlessly integrated NFC chip in the right shoe to provide the wearer with exclusive learning experiences about plastic pollution which can be accessed via their phones with a simple tap. By means of the mobile app platform, consumers are empowered to learn more about the collaboration, along with tools on how to avoid plastic in their lives and how to take part in future initiatives. Between 8 June to 8 July 2018, adidas Running will come together for a second year with Parley, Runtastic and its global running community for the global ‘Run for the Oceans’ initiative.

A limited quantity of the new adidas UltraBoost Parley and UltraBoost X Parley will be available online and in stores from 16 April 2018, with a retail price of R3,299. A female variants of the silhouettes will also be made available, which features a distinctive Adaptive Arch, a unique construction designed to adapt to the female foot.