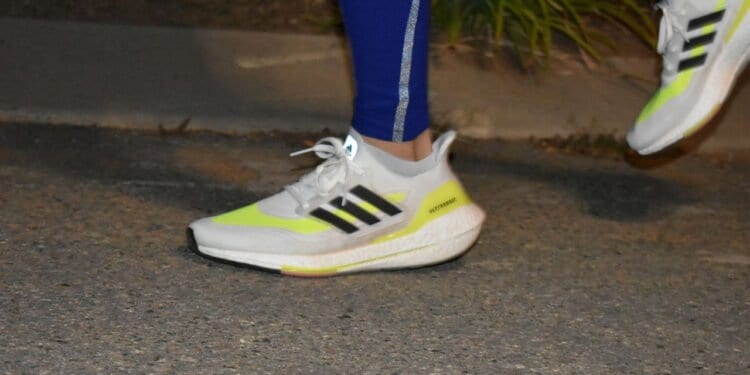 Earlier in the year, adidas launched its latest UltraBoost runner. Following a long line of UltraBoost silhouettes dating back to 2015, the adidas UltraBoost 21 is the next generation for the BOOST technology. Over the years, the brand has, on average, launched a new variant or update of the runner.

Over the past three years, I’ve reviewed both the UltraBoost 19 and UltraBoost 20. The two silhouettes closely resembled one another, with the latter being a slight update over its predecessor. However, with the UltraBoost 21, adidas has changed things up quite significantly, leading to a different aesthetic and, hopefully, performamnce gains to match. 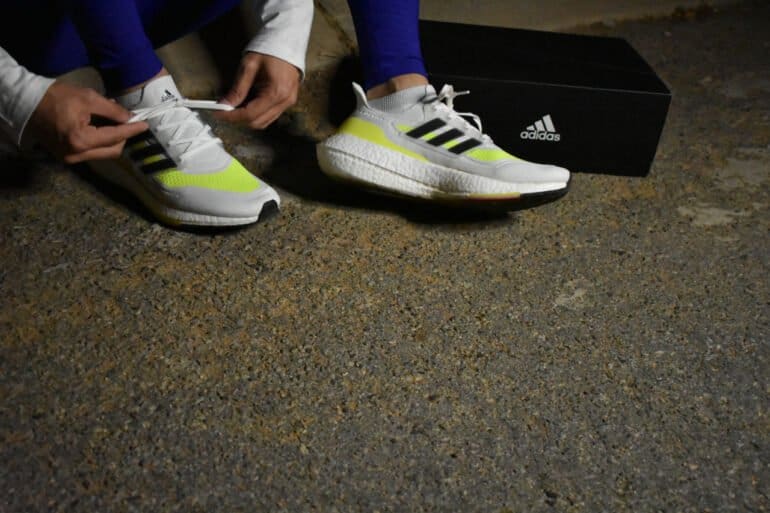 Unlike the slight evolution between the UltraBoost 19 and 20, the UltraBoost 21 has quite significant changes. While there are some hidden, a lot of it comes from the design. Upon first look, it still has all the same features as its predecessors. It fits the mould as the standard UltraBoost runner, but comparing each element side-by-side, you’ll notice that almost everything has been changed.

The Primeknit upper is crafted from Parley Ocean recycled plastic using adidas Primeblue technology. It maintains its sock-fit design, although the entire design has been overhauled. This is most evident in the stitching and support zones, as well as how the collar has been redesigned as well.

Although it features a single piece upper, the stitching separates the shoe into some standard sections. This includes the toe vamp, heel counter, tongue and the likes. On the version I received for review, these elements are also easily spotted in solar yellow, contrasted against the white on the rest of the upper.

As with the previous models, the eyestay forms part of the three-striped branding on the lateral and medial sides. While it still remains as a single-piece element, the three stripes are separated by a cut-out. This allows you to see the knitted upper underneath it. It’s not a huge change, but effective enough to be noticeable.

The UltraBoost midsole is ever-present. We shouldn’t have expected anything less. However, there is a discernible difference over previous UltraBoost shoes from across the range. The biggest change is the larger heel, which provides more boost. More on that in the below section.

Finally, we move down to the outsole. While the Continental rubber is still present, it doesn’t cover the entire sole. Instead, it’s only seen on the front portion. The rest of the sole is made from adidas’ new crystal rubber. During your stride, you’ll land on your heel, with the crystal rubber and Boost absorbing the impact and adding a bit of bounce. On toe-off, the Continental rubber comes into play, providing the grip you need to push off.

There are quite a few colourways available for the adidas UltraBoost 21. The first few to be released focused on the bright and bold colours, standing out when hitting the tar. Other colours include variations such as grey, black and even mint, providing a more reserved palette. adidas has done quite a bit of work for each of the new updates to make the shoe as comfortable as possible. Even for the smallest gains, the updates have meaning behind every one of them.

Despite being manufactured from 50% Parley Ocean recycled plastic, it provides great support for the wearer. It may not be the paper thin upper you’ll find on many high-end long-distance running shoes, but its stretch fit makes it supremely comfortable. Just as I slid my foot into the shoe, I realised how much support it provides. It’s a great fit without squeezing the life out of your foot. So much so, I find the laces to be somewhat superfluous.

The new Linear Energy Push system provided by the outsole was designed to firm up your stride. This is in part thanks to the reinforced materials used for the crystal rubber. It may seem contradictory to the benefits of the Boost midsole, but it’s a fairly important addition. More on that in the Performance section.

And finally, there’s the Boost midsole itself. Easily recognisable to have gained additional a bit, which is listed as 6% to be more exact. Most of this is on the rear end, providing support for the heel. It’s both taller and wider, which reduces the chance of an ankle roll. The support is a crucial aspect of how stable it is under load, protecting your ankles and even the knees as well.

The only one negative aspect when it comes to comfort is that the toe box is a bit shallow. Even with the Primeknit stretch, after a bit of time, some runners may feel the tightness. I would recommend going for the half size higher for the extra breadth here, which should alleviate any issues. 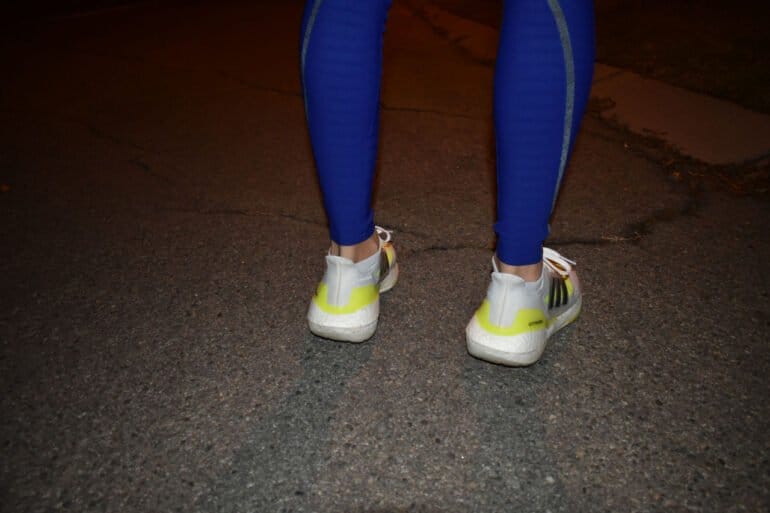 The UltraBoost 21 takes getting used to when you first start using them as your daily runner. For starters, the crystal rubber outsole absorbs some of the cushioning. This means that it feels firmer when landing compared to the full Continental rubber approach. Then there’s the collar. When walking, it feels hard around the ankles. When running, however, the gait cycle alleviates this tension. In addition, after a few runs, the collar softens somewhat, making them more comfortable overall.

The most notable difference is that Boost midsole. It’s been around for many years already, with seemingly very little change. However, adidas has always been developing the technology, as well as all those supporting elements to get the most out of it.

On the UltraBoost 21, adidas has added the new LEP Torsion System. This is visible on the colourway I had by means of the pink area below on the outsole. Apart from its aesthetic appeal, it performs a very important function. That’s the toe-off. With its firmer approach, it gives the wearer a stable platform from which to push off.

As An Everyday Runner

With the adiZero adios Pro, the focus of runner was to get the wearer to push through the full gait cycle – heel to toe. As mentioned in that review, it forced me to amend my running style. As a result, I switched from having previously landed near the mid-foot before toe-off. On the UltraBoost 21, adidas continues its approach to support a longer gait cycle with the additional Boost on the rear.

The extra Boost absorbs more of the impact, providing a more cushioned landing versus the spring effect on the adiZero adios Pro. adidas uses the LEP system to provide more toe-off for those extra gains over the previous UltraBoost models.

It may not seem like much, but it has a huge impact on your running. Over the past six months of running with the adiZero adios Pro, I realised after a few weeks that it was more suited to sprint runs every so often. This, more so than being an everyday driver. The speed runs put additional strain on my knees, which need more recovery time. With the UltraBoost 21, however, there is a greater deal of effort derived from my calf muscles. And this is a lot better long term. It has a higher likelihood of preventing injury, with calf muscles able to absorb more impact than your knees, while also healing easier over a shorter period of time.

This means that during practice runs, you can prepare much better for when you make the switch to the adiZero adios Pro for a sprint run. The combination of the two works well with one another. The UltraBoost provides a stable practice run with performance gains over the previous UltraBoost silhouettes, whereas the adiZero adios Pro provides all-out speed when you do feel the need to go faster.

The adidas UltraBoost 21 is a great everyday runner, offering a well-balanced performance for long-distance runs. From the additional Boost on the heel to the new LED torsion system for great toe-off, and the improved aesthetics, the shoe is a significant change over its predecessors.

It carries a slightly higher price point at R3,599 but delivers quite a lot more overall to make up for the additional cost. It’s available online at adidas.co.za, as well as adidas stores and various other retailers across the country. There are multiple colourways to choose from, with more to be released over the next few months.

The adidas UltraBoost 21 isn't a complete overhaul, but has significant changes to almost every element of the shoe provides great improvements throughout.