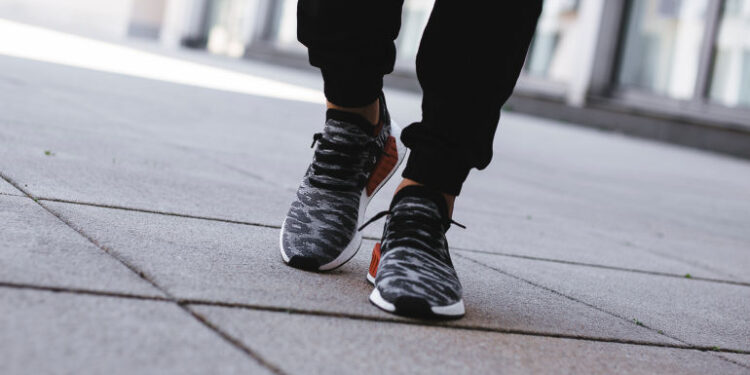 A few weeks ago, adidas Originals released two new additions to their NMD range in the form of the NMD_CS2 PK and the NMD_R2 PK. Both of these sneakers feature adidas’ micro-engineered BOOST™ and Primeknit fabric. As with many modern sneakers, the NMD_R2 bridges the gap between high-end streetwear and the everyday trainer. I’ve been a fan of the NMD range for quite some time, and the release of the latest PK range added yet another feather to its cap of a long lineup of sneakers to salivate over. It’s easy to spot an NMD. The design principle is well established in the unique design of the sole, almost regardless of what design you choose for the upper. The signature NMD EVA plug overlays are still there on the inside of the sneaker, although adidas has removed the outer set in favour of only the one towards the rear, just before the heel. The overlays are somewhat larger than the original NMDs, making for a much more emphatic statement. The linear cutouts have been slanted somewhat, with the plug now more closely resembling an elongated DotA 2 logo, which I find quite interesting.

The Primeknit upper is crafted with the Shadow Knit technique, while also featuring the Japanese, Sashiko stitching method for an extra touch of class. Shadow knitting is a form of textile art, where the pattern creates an image, or appearance thereof, created from an illusion of sorts. While the NMD_R2 doesn’t quite follow the conventional form of illusion arts, the almost camouflage grey pattern looks great. The Sashiko stitching is also a form of textile art, although it originated more as a method to repair damaged fabrics with a strong pattern and later developed into the addition of patterns on these stitches. You can be assured, then, that the fabric on the upper not only looks great but is extremely versatile and durable. While the sneaker does include laces, you don’t have the typical plastic eyelets featured on most shoes, but instead pulled through the fabric by means of a small incision. In all honesty, you don’t need the laces at all, as the knitted fabric provides the form-hugging comforts of a sock, moving and shaping to your every movement. The BOOST™ soles, as with the Puma ST Trainer Evo Slip-On, protrude somewhat from the rear, beyond the heel. For some not used to the additional real estate, could find it cumbersome at first, especially when walking down stairs where the heel will often hook with each step. I had no such issues, however, not only because I may be more used to such a design, but because it isn’t exorbitant by any means.

Shoe care on the R2 is of high propriety. Given the textile used on the upper, keeping the sneaker clean is essential. I bought a protective spray to use on the R2, which assists in preventing a buildup of dust and dirt. The same, though, cannot be said about the rubber soles. The white rubber picks up dirt almost as easy as fingerprints on a smartphone. Thankfully, cleaning is as easy as a simple wipe with a cloth for dust, and a wet cloth for more stubborn dirt.

All in all, the design and build of the NMD_R2 PK is exemplary. There are many other patterns and colourways to choose from on the updated NMD_R2 for both male and female, which gives potential buyers great options if they don’t particularly enjoy the grey camo look. Despite all the nuances with the look and build of the R2, there’s still a lot to be had in terms of the performance. Most of the benefits on the R2 comes from the micro-engineered BOOST™ technology, as indicated in the introduction. Senior Director for running at adidas says of the BOOST™: “Boost is a highly elastic thermo plastic urethane that is formed into an elliptically shaped foam pellet which is super soft but also springy.” Essentially, the pellets are fused together in a moulded shape, in this case, the midsole. The technology gives wearers a literal spring in the step, which also helps reduce the amount of energy lost while walking or running. For runners, this means you can run further with the same amount of effort, or, alternatively, run with less effort over the same distance, boosting performance whichever way you look at it.

There aren’t many people who’d be willing to put a R2,500 sneaker through its paces as a running shoe, or through many different elements. Instead, as with many sneakers of late, they seem to be geared more towards the sneakerhead, showcasing their styles on the streets rather than on the track. That said, the NMD range has been known to provide owners with the option to choose between using it solely as a fashion statement, or as an additional trainer if you wish. Having managed to put the R2 through its paces, having a few runs, loads of walking, and even some ‘off-road’ elements, the shoe lived up to all the expectations. Compared to the Evo Slip-On, the R2 felt a lot more comfortable, fit more snugly, and an extra spring in my step. It may not walk as light on foot as the Evo Slip-On, which could almost be used by ninjas, but outshines in almost all other departments. The R2 provided me with more time in the air between strides than anything else I’ve used previously. This is the power of BOOST™. And it shows. There’s a lot to love from the latest NMD range, not simply the aesthetic appeal. The NMD_R2 is lightweight, comfortable, and very good looking to boot. While they may not be as light as the Puma ST Trainer Evo Slip-On or even tread as lightly, the NMD_R2’s are much more form-hugging, while at the same time more breathable than the Evo. Even better, wearing the R2 for an entire day poses absolutely no issues, thanks to the BOOST™ midsoles.

I absolutely love the adidas Originals NMD_R2 PK for its versatility, and it looks great as well. You can pick up a pair of the sneakers for R2,499, which will be available from adidas.co.za, adidas Originals stores, and selected retailers nationwide.