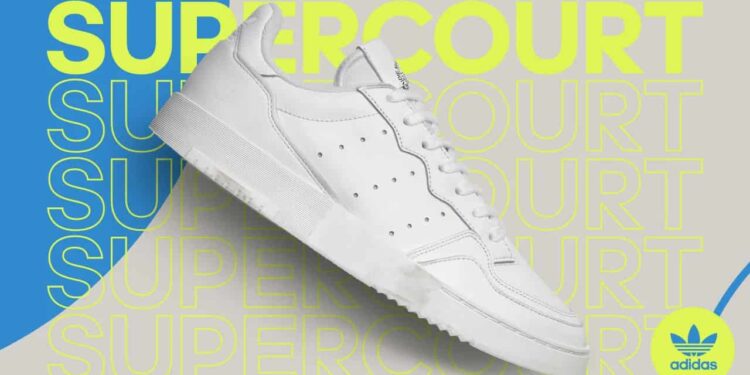 The adidas Originals brand has always been about the classics, reimagining, redesigning and relaunching numerous classics from its historical archives. A few weeks ago, the team launched yet another archived collection, the Home of Classics pack. The range of sneakers from the pack includes the Stan Smith, Superstar 80s, Continental 80, Rivalry Lo, A.R. Trainer, as well as the Supercourt to round off the supreme collection, which spans across a 50-year history.

The HoC pack introduces a range of the above-mentioned classics, which have redesigned with new elements for the modern generation. The collection aims to celebrate what it means to be young in a modern world, with a focus on individuality and limitlessness, with the undying rebellious nature of the youth. Having received the Supercourt sneaker, I tapped into my youth and hit the streets to put it through its paces.

adidas Originals has always been about the celebrating timeless, classic styles, and so it is again with the #HomeOfClassics pack. ??? . ? = @call_me_blk . Thanks @adidasza and @girlabouttownpr. ?

As per its namesake, the Supercourt was designed for the courts. And as per the old school tennis rules, outfits were required to be all-white. Another of the key features is that the design has a minimalist tone. But, it’s only in those first glances that the Supercourt appears minimalist. A closer look a the sneaker reveals plenty of subtle details. From the leather overlays on the upper to the textured finishes on the EVA outsole.

The base upper includes the dotted three-stripes pattern, a notable feature on many adidas Originals [https://www.fortressofsolitude.co.za/adidas-nmd_r1-pk-triple-white-japan-pack/] classics. There are a number of overlays on top of this, including the heel counter, a double ‘mudguard’ around the vamp, complete with an additional overlay above the midsole on the inner lateral sides. While the sneaker has an all-white finish, these layers, textures and patterns create a sense of varying shades to produce a flow from front to back. The overlays also create a worn-in look, which adidas aimed to achieve. As we all know, that worn-in look often provides a sense of pride for the wearer, tying together all their life experiences in their favourite pair of sneakers. There may have been controversy create a short while back for a brand selling pre-worn-in sneakers, which iterates the importance of achieving this look, which has been reproduced here without the cheating aspect.

Moving to the outsole, the Supercourt has a stitched pattern across the toe and a horizontal, linear pattern on the midsole. In addition to this, the rubber outsole has a unique pattern, or series of patterns that extend over to the edges, which are visible off the sides even when the shoe isn’t lifted.

One of my favourite aspects about the design is the tongue. Often times this is simply an excuse to slap a logo onto the shoe to have it facing forward to be presented to onlookers as you walk by, but there are a few nice features adidas has included on the Supercourt. The first of these is the ‘double logo’ approach. On the tongue base you’ll find a circular adidas logo with the text “the brand with the three stripes”, which most sneakerheads would easily identify. On the Supercourt, the team has added a leather overlay on the top half of this circular sign, with the text written in German. It’s a great ode to the original sneakers from quite some time back. Hidden beneath the laces is additional text, which reads “Supercourt” in bold, followed by “world-famous for quality” and the trefoil logo below that. These two elements are the only two in black (apart from the text on the insole), which stand out against the all-white finish.

The Supercourt is available in a few additional colourways, most of which are predominately white to achieve its classic aesthetic. 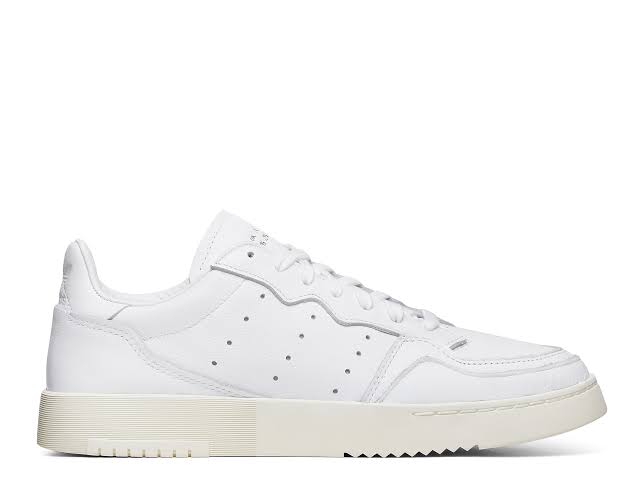 For many wearers of classic sneakers, especially those with rigid soles, there is an acceptance that, while the sneaker looks great, some sacrifices have to be made in terms of comfort. While the statement does hold true, especially for models that attempt to stick as close to the originals as possible, which I do love, you don’t always have to sacrifice that comfort, an important aspect of modern footwear. No one wants to have their feet, toes, ankles or Achilles cut up wearing their favourite sneakers, which in turn would mean that wearing them would indeed be limited. Thankfully, the Supercourt doesn’t suffer those same concessions. Instead, the insole is soft and well-cushioned. The shoe is also spacious on the inside with sufficient padding on the leather inners so as not to irritate your feet either. I initially thought this level of comfort would be short-lived given the apparent design of the sneaker, but I was proved very wrong. The Supercourt allowed me to continue going for hours on end without issue. While the inner padding does make for a slight bit of extra warmth, the level of comfort is good enough for that not to matter one bit. 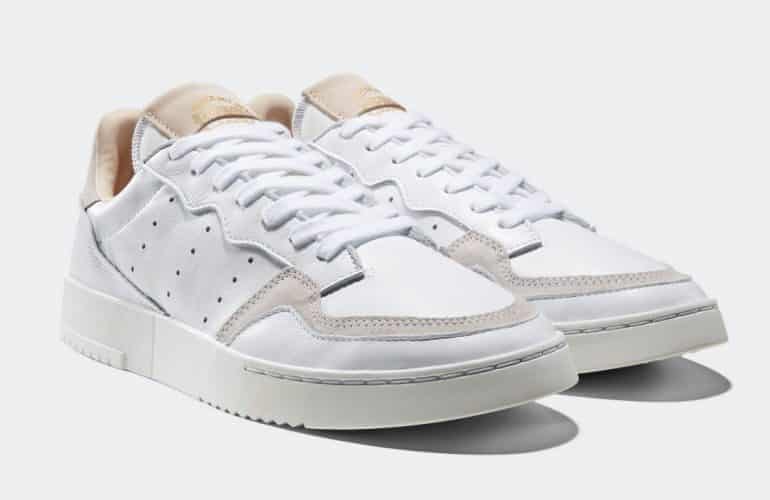 As mentioned above, the Supercourt has great levels of comfort for the wearer. At the same time, however, this is no trainer. The slightly harder leather doesn’t leave much in the way of flex when moving at speeds, which means it’s not something you’re going to want to be running in, especially not until it’s worn in. All that said, this isn’t what the Supercourt was built for, at least not in the modern era.

The quality of the Supercourt is second to none. All the finer detailing is put together from various pieces, but don’t feel as if they’d easily come lose even after some wear and tear. The double overlayed toe also makes for additional support, if required. The leather upper finish is solid and thick enough so the wearer doesn’t have to concern themselves with a few scrapes and the likes that might easily tear the material. It’s quite a solid design overall. This also means that the sneaker is a tad on the heavier end of the scale, but that’s not really an issue here.

There are two factors to consider when buying the Supercourt. The first of these is keeping the sneaker clean. The additional grooves created by the overlays and the patterns leave me worried whether I’d be able to clean myself or if I’d need to take it in for a professional clean every so often. At the same time, however, all of that will eventually add to that worn-in look so many desire. It all depends on which type of sneakerhead you are.

If there’s one aspect about an all-white sneaker is that it is easily pairable with quite a number of different outfits. That’s a great benefit to anyone purchasing the Supercourt. I’ve mentioned several times how comfortable the sneaker is, it cannot be understated the extent to which it is. It’s just amazing, especially considering the classic design. The Supercourt is also quite affordable, considering the prices of modern sneakers, at just R1,499. You definitely can’t go wrong with a pair of the adidas Originals Home of Classics Supercourt.

If you're looking for both comfort and style, look no further than the adidas Originals Home of Classics Supercourt. Offering great comfort and looks at a fairly affordable price, you definitely cannot go wrong in owning a pair.