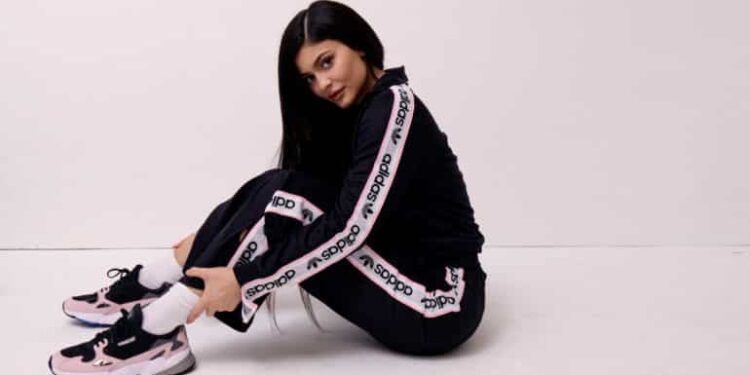 In 1997, adidas Originals dropped the Falcon Dorf runner. in 2018, the adidas team has partnered with entrepreneur, and style icon, Kylie Jenner, born in the same year, for the launch of the rebooted silhouette. The original sneaker paid homage to strong creatives who shifted boundaries and paved the way for future rebels. The duo have joined forces for the debut of the brand’s Falcon campaign. The Falcon Dorf is the blueprint upon which the campaign is built, coming of age in the late 90s, a daring statement injected into the pinnacle of an era where women weren’t afraid to break rules and speak the truth. The silhouette featured groundbreaking design, while pushing boundaries with a fashion-forward edge. Two decades later, the Falcon is reborn for the new generation of sneakerheads.

Remaining true to its core values, which established a revolutionary force, the Falcon has been reborn in a grey, pink, black and blue colourway. The design features striking palettes and bold new designs, including a panelled construction in a classic mesh and suede overlays. The design also includes a moulded heel unit with reflective detailing. The sneaker is knitted together through its midsole, a juxtaposition with accents of colour on the forefoot and heel to create a confident silhouette that bridges 90s nostalgia with modern energy.

For additional imagery from the first drop, check it out here.