adidas has been known to push the boundaries of technology when it comes to the design and manufacturing of its shoes. Whether it be your daily sneakers or your running and performance shoes, the company has never been one to shy away from progress.

The brand kicked off its campaign for carbon neutrality and sustainable manufacturing with the Parley initiative. Then it moved onto modernising its manufacturing process with the 3D-printed Alphaedge 4D sneaker.

Most recently, the brand released the adizero adios Pro, a sleek and lightweight running shoe with EnergyRods for enhanced performance on the road.

Now, the company has combined many of these technologies into something even more futuristic. The result of which is the creation of an all-new sneaker design and manufacturing process. The adidas Futurecraft STRUNG was born.

The journey of innovation for the adidas Futurecraft STRUNG started off in a basement. The team comprised of a small group dedicated to the project. The idea behind the sneaker was inspired by architecture and the use of robotics to create new ways to build fibre structures and materials.

The challenge on this project was that it was to be designed and built from scratch. While other industries were able to draw on research across industries, there was nothing to fall back on when it came to manufacturing a sneaker in the same manner. As a result, the team relied a lot on trial and error, but with a clear vision in mind. 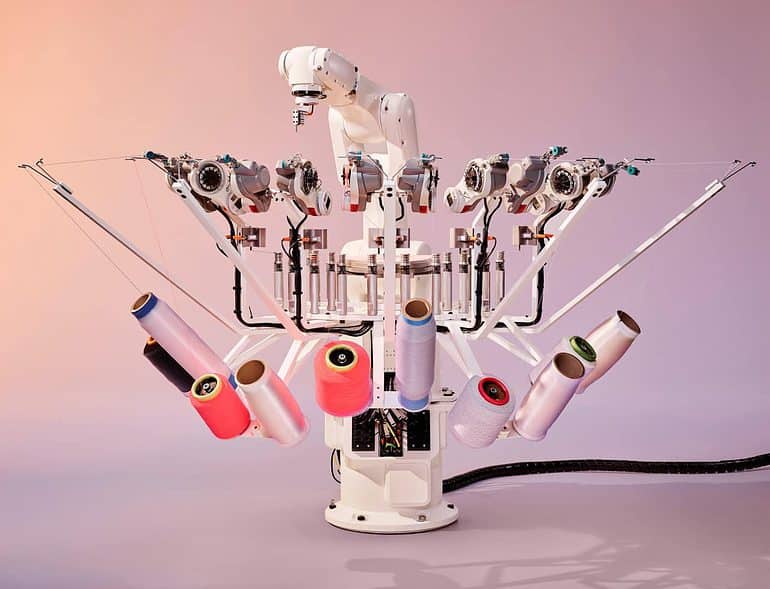 With new materials that require new manufacturing processes, a new way to get there is required. The project is all about exploring and pushing technological boundaries. The foot is complex and doesn’t move and contract in a uniform way. Even more variable across different people. This is a challenging problem to solve. The question raised by the team is how to develop a tool to tackle such a unique system.

The design team initially kicked off the project building things by hand. This includes making prototypes and allowing the project to evolve naturally instead of rushing to complete iterations in the early stages.

In an attempt to mimic the thread “winding” by hand, they needed to look at integrated athlete data and the software to create, simulate, analyse and test the STRUNG uppers. After two years of development, the team switched gears by deciding to bring on a design partner, Kram/Weisshaar, a pioneering digital design studio.

The STRUNG process is its own challenge. The team needed to make something that could place yarns in any direction – beyond what exists in the textile industry today. The STRUNG material is not knitted and it’s not weaving either. The process didn’t exist prior to the project.

The STRUNG material is a complex composite. It has changed the way the design team think of creating uppers. It’s not your standard material upper stitched together but more like a set of interrelated systems that work together. And the process is a continuous evolution. For the adidas design team, the process of development is still in its early stages. Ongoing testing is fundamental to what happens next with a trajectory towards offering both athletes and consumers an advanced and premium product.

The adidas Futurecraft STRUNG sneaker is the first milestone of many. The results emphasise how the team looks to transform the manner in which it works within the industry. This includes designers, engineers and sports scientists.

The resultant upper is a lightweight design with a cocooned feel and fit. The shoe locks in the heel to prevent any slip. The shoe includes stiffer and stronger red threads placed at the midfoot, toe-box and heel. The softer yellow threads in the forefoot provide more flexibility. Each of the threads work together within its materials to provide a precise fit and support throughout the gait cycle.

The midsole builds on from the radical adidas 4D lattice design. It features a new shape to cater for forefoot strikers. The heel is minimised to remove additional weight. And the rubber outsole was designed specifically to provide traction where it’s needed. This results in an extremely minimalist midsole.

The aim here is to be the platform that serves multiple sports, having initially started with running. But that’s just the beginning of the adidas Futurecraft STRUNG.

The adidas team reiterates that technology is here to achieve wonderful things. However, they can only achieve the right things if it’s informed by human behaviour. The open approach is what has guided the STRUNG journey thus far. And this is the way the team looks to continue this approach into the future.