A few weeks ago, adidas launched its latest addition to its 4D range of sneakers. The adidas 4DFWD brings with it a new 3D-printed midsole. The specialised midsole is the combination of 17 years’ worth of athlete data and next-generation technology.

The 4D lattice structure was developed in partnership with Carbon over the past four years through the Carbon Digital Light Synthesis process. With an enhanced take on the 3D-printed midsole, the shoe provides forward motion to runners.

Ever since the release of the first Futurecraft sneaker in 2016, I’ve always wanted to get my hands on a pair. Acknowledging that there may still have been a lot of work to create a daily runner, I wasn’t in a rush to replace my Ultraboost, even after the 2019 updates. With the latest release also comes new enhancements. This includes the extended heel, as well as the curvier forefoot spring.

Having received a pair of the adidas 4DFWD a few weeks ago, and having put it through its paces on the road, I can make my conclusions of the futuristic technology. 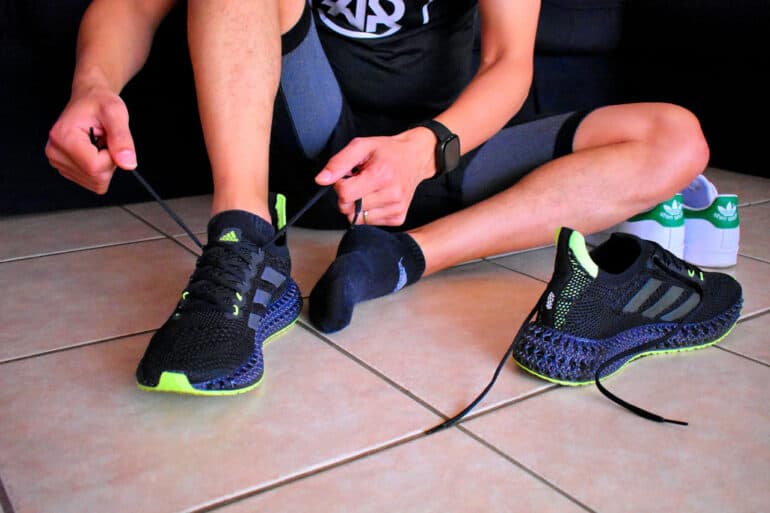 When it comes to sneakers, choosing a design is an important aspect to match your look. However, this isn’t always the case for running shoes. More often than not, brands focus on performance and comfort over aesthetics. Over the years, adidas has created some of the best-looking running shoes on the market. Who says you can’t have performance and good looks?

There are two main aspects of the adidas 4DFWD for its design. Firstly, there’s the midsole. Then there’s the textile upper. Both designs are intertwined to create the perfect combination of form and function, coupled with aesthetics.

The 3D-printed Carbon midsole was designed not for its looks, but for performance. However, the 4D lattice structure provides a futuristic take that many fans will appreciate. Although the structure is manufactured to work as one, it has the appearance of two rows in the midsole between the upper and the outsole. In addition, it also has columns, which create ‘blocks’. It is here where you’ll be able to see the light shining through from the opposite side. It’s beautiful.

Switching to the Primegreen upper, it has the appearance of a knitted sock. We’ve seen this across many of the adidas running shoes, especially for the Ultraboost range. It has made its mark over the years, and the look is solidified once again in an all-over Core Black finish.

Additionally, the shoe also has a few reflective materials throughout, most notable the three stripes on both the lateral and medial sides. Overall, from a design perspective, the adidas 4DFWD ticks all the right boxes. It’s an added bonus that while it didn’t have to, given the nature of the performance and newly included technology, but it does. It seems trivial to make any statements on the level of comfort the adidas 4DFWD brings to the world of running. As previously stated, the technology has been around for four years, and around two years in its current form. It goes without saying that the brand would not have continued down this path if it didn’t provide that level of comfort its owners required.

But, with this being the first time I’ve owned and reviewed any 4D running shoe, there are some notable features. Firstly, it’s how it adapts to various surfaces. The rubber outsole is capable of finding grip on any terrain, but it’s the changing of those terrains that bring with it the next-level comfort.

Think of those beds where you can jump on one section, without disturbing the other end of the bed. This is similar in principle to the 4D midsole. If you hit a bump, a stone or variation in the road, the midsole adjusts to this and keeps the landing of your foot as balanced as it can. Not only does this make it easier to impact your foot, but also protects your ankles. I can’t speak to the reduction of impact injuries as a result of this, but it would be worth unpacking in more detail if there was research in line with it.

When we speak of the fit, this is more to do with the upper. Sliding into the shoes, you’ll have that familiar Primeknit feel if you’re coming from the Ultraboost range. The sock-like nature provides an easy feel through each stride.

If there is one aspect worth noting towards the negative, is that the collar is a bit loose. Thankfully, once you’ve started your run, it becomes less prominent and there’s no heel slippage either. 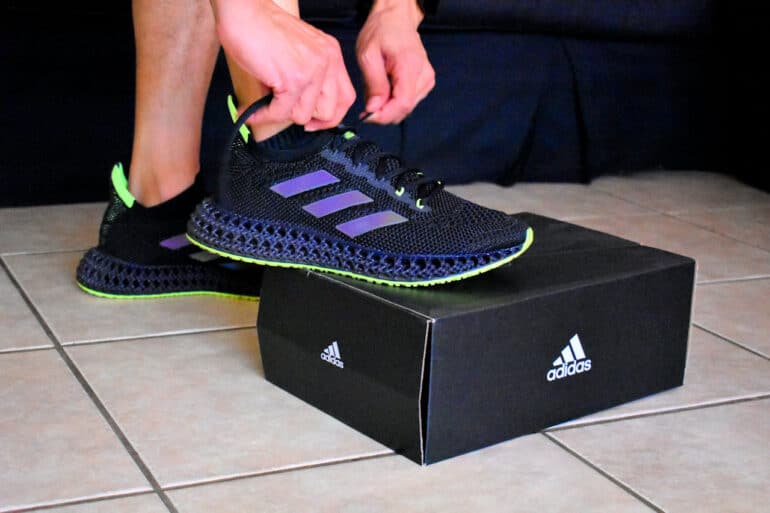 The Primegreen upper is made of 50% recycled materials. There is no virgin polyester used in the manufacturing process for the shoe. Additionally, the midsole features 40% natural and renewable materials itself.

Sustainability is a huge driver for the fashion industry in recent years. It’s often targeted as one of the highest contributors to global emissions. It’s worth pointing out that both the upper and midsole are crafted from a mix of recycled materials. adidas has been driven towards a net-neutral benchmark in the next few years, and with products such as these, it goes a long way to achieving those goals. The 3D-printed Carbon midsole answers the question of whether you can code a pair of running shoes for the ultimate performance. The answer is yes. adidas designed the 4D lattice structure to keep you moving forward. This is evident from the angled compression under load.

When you land, the structure compresses forwards, absorbing your impact. This energy is converted to propelling you forward once you’ve moved through the gait cycle towards the toe-off. Think of it as a spring, once you’ve let go of it in a compressed state, it jumps forward.

The shoe was engineered to counter the mechanical forces where you’ll lose a lot of your energy when hitting the surface. The angled heel provides a visible indication and can be felt underfoot. The marketing slogan “take it forward” is more than just words on a screen.

What I found most significant are the levels at which you’ll notice these mechanical forces working. Upon starting my run, I couldn’t feel much of anything. It felt like a normal running shoe. However, a lot of this can be attributed to the sporadic nature of those first few steps prior to hitting your balance. For me, this equilibrium comes in around the 500m-mark.

At this point, I could start to feel the smoothness of motion in running with the adidas 4DFWD. However, this is not where it’s at its most impressive. During my daily run, I encounter a steep 1KM uphill, which tends to drain most of my energy prior to the final 2KM stretch. Halfway through the hill climb, I’d often lose most of my momentum. This is where the midsole comes alive. The heaviness underfoot provided more impact, which meant more energy was absorbed and then released. I could feel the lattice working to my benefit. 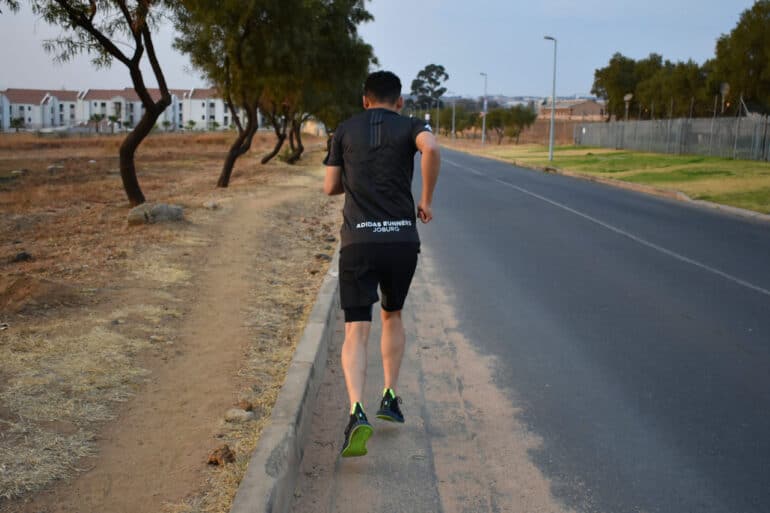 Despite the looks, comfort and performance, there’s always the worry that the midsole won’t hold up over time. This brings the question of quality to the fore.

While I may only have had the shoes for two weeks, there’s no indication of any strain on the structure as a whole. Each part of the midsole works together to absorb the impact and pushing you forward through the toe-off.

Further to this, I’ve done a bit of research trying to find evidence of the structure failing or tearing after long periods of use where wear becomes an issue. Needless to say, there aren’t many instances of this around the web. And that’s great news.

I will be keeping tabs on this over time and will update the review if there are any significant changes in this regard. However, for now, there is a good indication that the structure will hold up over time, at least as long as any conventional pair of running shoes. 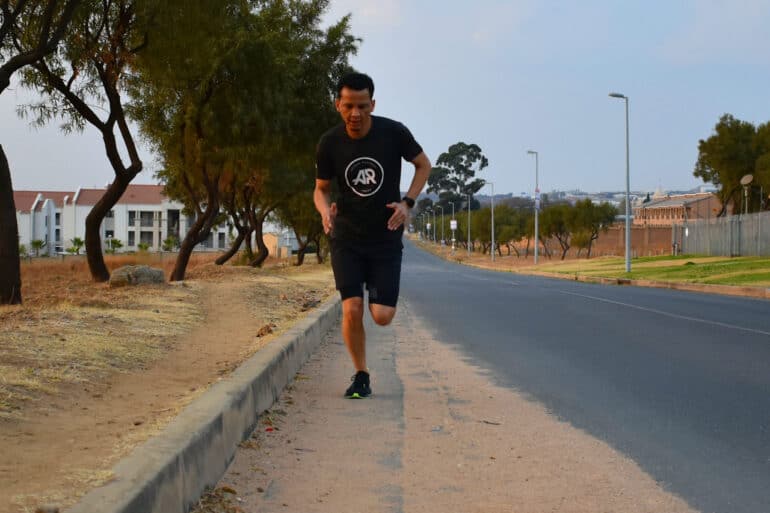 Should You Buy the adidas 4DFWD?

There is a definite impact that the adidas 4DFWD brings. The specialised, 3D-printed midsole provides a great mix of comfort and performances gains through its rebound technology. Its 4D lattice structure is truly futuristic, pushing you forward in each stride, while at the same time adapting to the terrain in order to keep a smooth motion through your gait cycle.

The midsole works best when you’re at the lowest point in your run. It’s almost as if it’s motivating you to push through the struggle. And it supports you all the way to the end. It may not be as fast a running shoe as many others, including the adidas adizero adios Pro, but it’s a far more rounded daily runner, providing better overall results for the wearer.

The shoe retails for R4,999 and is be available online at adidas.co.za, as well as in-store at adidas concept stores and select sports retailers.

The adidas 4DFWD is a great running shoe. It offers solid comfort and an impressive forward-motion mechanic to provide that extra bit of performance. The overall look is also great, both with the redesigned Primegreen upper and 4D lattice structure.