Every so often, an OEM tries to spread its wings from the tried and tested. Having achieved significant milestones within the storage field, ADATA has now ventured into the world of audio, more specifically within the gaming market space. When it comes to developing products, though, things aren’t always as easy as launching a new brand, however good it may be, as has proven in the smartphone market. Building a completely new line of products for a well-established brand may be harder than it seems, but that doesn’t mean that it isn’t worth testing.

ADATA has released a new gaming headset, which is a two-part combination including the XPG Emix H30 headset and the Solox F30 amplifier. The gaming headset features a number of different features, add-ons and detachables that make it quite an alluring prospect to most gamers. The only thing that remains now is whether any of it is any good. So, is it? 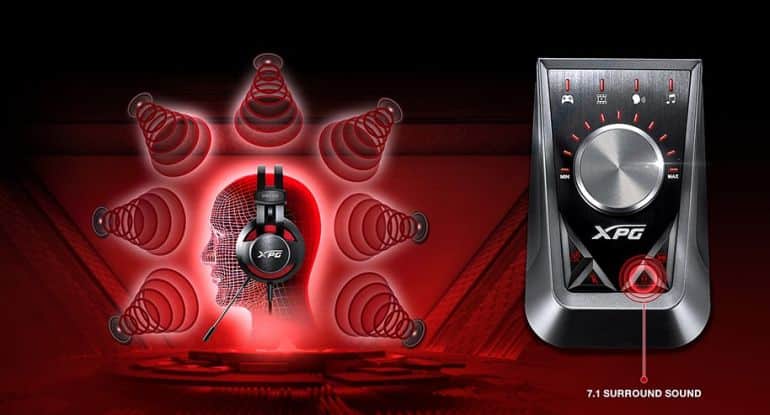 The combination is split into three distinct parts: the headset, the amp, and the stand. Let’s take a look firstly at the simplest of the three, the stand. It isn’t the easiest thing finding a decent looking, and decently put together stand when buying a gaming headset without one. The stand included in the contents of the headset is quite solid, and won’t fall over easily, even with the headset cradled. The proportions of the stand make sure of this, as it is well balanced without taking up too much space on your desk. The bottom of the stand houses the detachable amplifier neatly thanks to the magnetic attachment. The amplifier also adds weight to the bottom, again for additional balance. The stand is made from a type of polymer that closely resembles an aluminium frame, although you should be able to spot that it isn’t. Simple use of a magnet will confirm this. Overall, then, the stand performs its function well, without any unnecessary clutter or complication.

Moving onto the Solox F30 amplifier, it too is made up of quite a bit of plastic. The left-hand side of the unit has mini-USB port, which is used to connect to your PC by means of two USB ports. This connection provides support for the two USB 2.0 ports on the amplifier itself, as well as 3.5mm auxiliary line-out. The line-in isn’t amplified so you can connect your active PC speakers. Switching to the right side, you’ll find two 3.5mm connectors and a USB 2.0 port, which connect the H30 headset to the amplifier, and hence the PC with a standard audio and microphone input. The top side of the amp is a lot more complicated, all of which revolves around a fairly large volume knob controlling the volume. There are also a number of indicator LEDs, which lets you know which volume level you’re on, which equaliser setting you’re on, as well as which audio feed you’re using. There are buttons for each of these settings all of which are easy enough to press.

Moving to the XPG Emix H30 headset, you’ll find even more plastic on the earcups. That said, this is nicely complemented with a black, metallic headband for extra support. The earcups are decorated with a red metallic mesh, which also lights up with a red LED lighting when turned on. There’s also support for a detachable mic via a 3.5mm jack, which can be stored away when not in use. The metal headband itself isn’t adjustable, but there’s a foam band slightly below that forms the support for your head. While you can’t adjust the band manually, the inner foam band adjusts to your head via a spring mechanism, while the flex of the metal band provides adjustment for your ears. The cups are also quite large, which easily wrapped around my ears and provides comfort thanks to the polyurethane cushions. Unfortunately, the cups aren’t detachable, which means they aren’t easily cleaned when dust builds up in the crevices.

Overall, the design and build of the unit are well put together, despite the high amounts of plastic throughout. The stand and amp are grey (or anthracite) coloured, while the headset has more of a black theme going for it. All of it is tied together with the red LED lighting. 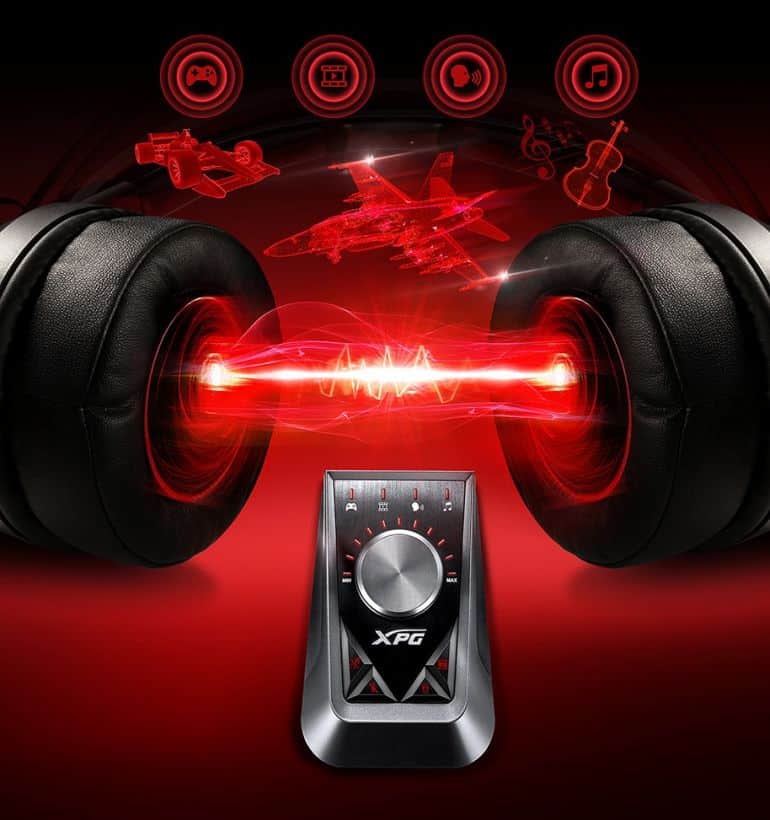 Unlike many other headsets or gaming headsets, the XPG unit isn’t as straight-forward as plug-and-play. Technically, you only require plugging in to get the unit in working order, although there’s a lot more “plug” than “play”.

As stated earlier, the amplifier plugs into your PC by means of the two USB 2.0 ports, connecting to the unit through a mini-USB port. You’ll then need to attach the headset to the amplifier using a Y-cable and a USB 2.0 cable. There are also another two USB ports, which can be used to plug in your flash drives, mouse, or other portable devices. There are quite a number of USB 2.0 ports on the unit, which begs the question as to why it doesn’t offer the more recent USB 3.0 support, or even USB Type-C, which is slowly becoming the new standard. It is worth noting that my motherboard doesn’t offer Type-C support either, but having that added to the amplifier would have been quite useful, and I wouldn’t have to use the adapter I currently have.

Once all the cables have been plugged in, the amplifier should already be powered on, which means you’re now able to listen to audio from your headset, or any other device connected to it. While the Solox F30 is labelled as an amplifier, it shouldn’t be confused with that of an external soundcard, nor provide nearly as much functionality. That isn’t to say, however, that it isn’t useful. The unit comes with a number of functionality and features.

It isn’t all plain-sailing, as the unit does come with its own set of drawbacks. The line-out added to the unit allows you to connect your speakers to the PC (or another set of headphones). This is where the first drawback is highlighted. Owning a set of surround sound speakers for my PC, it comes with a set of three 3.5mm cables that connect to my sound card. This means that using the amplifier to connect to the PC only offers stereo sound, removing the surround sound effect and leaving three of my speakers unused. It is a nice to have, however, being able to switch between your headphones and standard speakers without needing to unplug any cables.

In terms of the equaliser, there are four interchangeable options to switch between. This includes Gaming, Voice, Music and Cinema presets, which changes the audio balance for the type of category selected. What’s missing from the selection, however, is a default or standard EQ setting that caters for more audio profiles. This wouldn’t be a problem if the four options provided a good mix, but unfortunately, it’s a bit overkill on a few to make it work for all categories. For example, the Gaming setting is quite heavy on the bass, so won’t work for other audio requirements.

The amplifier has built-in DAC support, which has 24-bit/96 kHz audio reproduction. 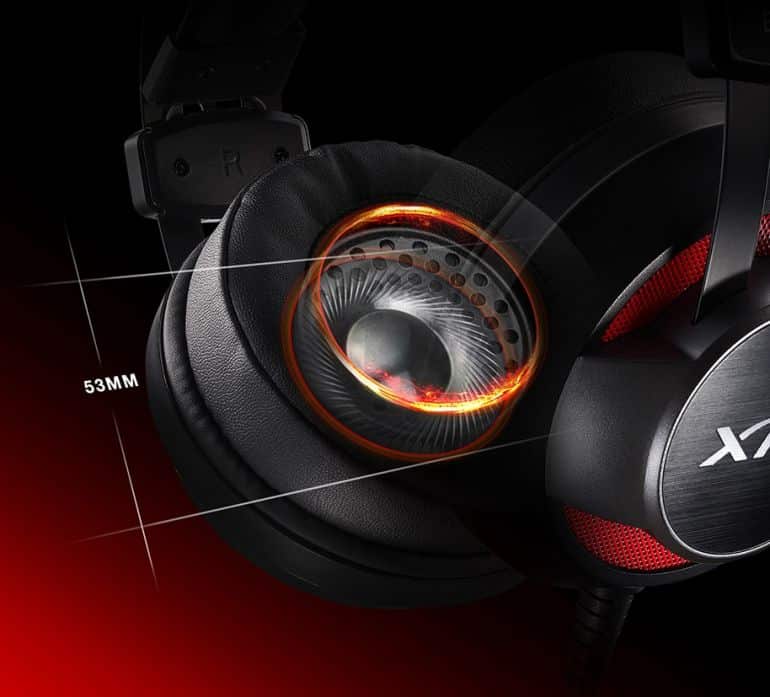 Moving on from the performance of the amplifier, let’s take a closer look at – or listen to – the H30 headset. Having already determined that at least one of the four presets will always be active, it makes the testing slightly more difficult. Breaking it down into the five main frequencies – bass, midrange, upper midrange, highs and mid-highs.

One of the most standout aspects of the headset is its bass. The bass levels across the range are quite well represented, with reproduction of the large bass drum also quite solid and deep. At times, however, the bass can be a little distracting when listening to music and video that don’t often require the low frequencies. Still, it’s still fairly crisp and a treat to listen.

At the lower end of the midrange, the audio reproduction is quite good. Moving up slightly through the range, the sound is drowned out by the higher frequencies. Depending on the type of voice, the results may vary quite drastically across the spectrum. Female vocals tend to be more balanced, while the male counterparts are often a bit too much on the heavy bass side. The upper midrange is almost non-existent and requires some tweaking via the included software equaliser to bring it out a bit more.

Moving to the highs and mid-highs, they both have a good reproduction on the H30. Again, it depends on which preset you choose from, with the Game mode drowning out most of the highs. Music, however, is a lot better represented. Highs and super-high frequencies are also very pronounced. The balance is also quite good and doesn’t distort at higher volumes, a telling sign of an unstable reproduction. That isn’t the case here. Metallic sounds are also good but often suffer as a result of the foam earcups, which have to be positioned perfectly to get the full effect.

Lastly, the virtualised 7.1 surround sound is also very well simulated. The different sound directions are quite well represented. It’s not 100% perfect, though, with a few overlaps in places, but that tends to be a side-effect of many virtualised headsets. Overall, then, the Emix H30 headset is pretty well represented across the different audio levels, as well as the surround sound reproduction. 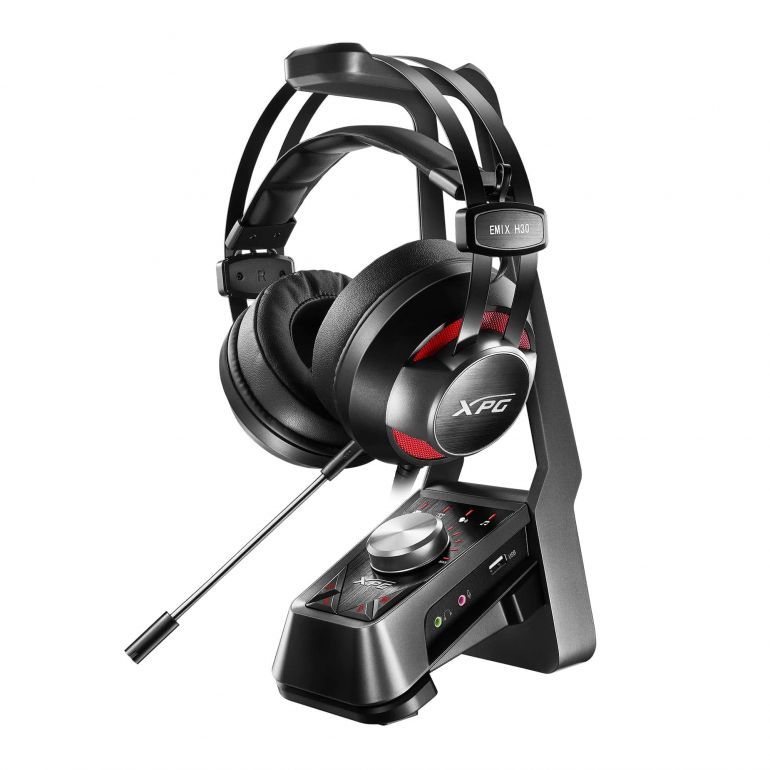 The Emix H30 and Solox F30 can be tweaked by means of downloadable software, the XPG Audio Centre. Again, it should be noted that while the software allows you to adjust the equaliser, it doesn’t completely override the four presets. Instead, the adjustments are only a small adjustment of those preset EQ settings as something of an offset, which, at least, allows you to fine-tune the audio for a more balanced sound representation. It’s also worth noting here that connecting the headsets can be connected directly to your PC to avoid being limited by the four presets if you take issue with the overall reproduction.

Apart from the EQ adjustments on the software, the XPG Audio Centre also allows you to fine-tune a few other settings such as the volume of each of the virtualised speakers in the Xear Surround menu, adjust the room size, Xear Dynamic Bass, Xear Smart Volume, Xear Voice Clarity, and Xear Audio Brilliant, all of which have numerous settings to tweak to get the most out of the headset. The microphone settings also have a few adjustments included as well, some of which have a fun element to it, like setting your voice as a cartoon character, or someone of the opposite gender.

Overall, while the software doesn’t completely override many of the default settings, there are enough additional features and tweaks to be made that make it worth using from the offset. The ADATA XPG Emix H30 Gaming Headset and Solox F30 Amplifier provide a well-rounded set of features and functions, as well as audio quality to make it a worthwhile purchase. The unit, however, isn’t currently available in South Africa, but may soon reach our shores with an indicated RRP of R2,269. The indicative pricing falls right between a really good pair of studio headphones and an above-average gaming headset.

The XPG Emix headset isn’t without its issues, some of which are fixed, and some of which may be changed by means of a firmware update of both the headset and amplifier. It is worth noting that upon connecting the device the first time, I was prompted to update the firmware, which bodes well for prospective buyers knowing that the company offers continued support in the form of software and firmware updates. For users who are even remotely serious about their gaming won’t find too much issue with the price, and with the device’s capabilities makes it a really good buy.