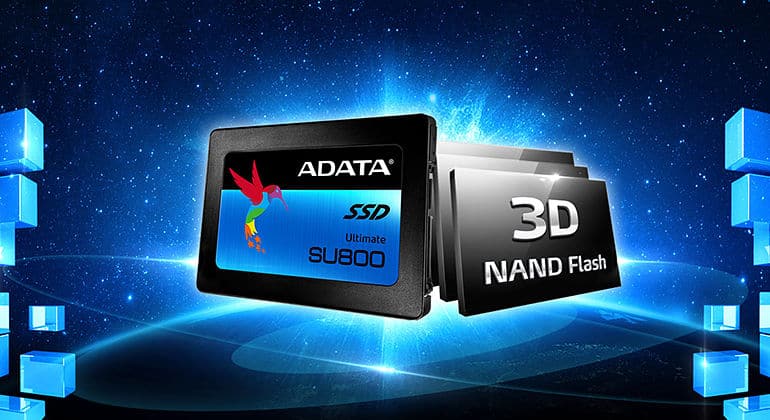 At the start of 2018, I had the opportunity to review the ADATA Ultimate SU650 SSD, which has become a popular option for prospective buyers looking for the additional speed of an SSD without making too much of a dent in your pocket. There’s been a number of developments over the past year in the storage space, and with the ever-increasing popularity of the M.2 SSD form factor, as well as its reduction in cost price, the benefits have also filtered down to your more average SSDs as it were. I recently received the more powerful variant from the range, the ADATA Ultimate SU800 SSD.

The SU800 is the second highest from the range, which includes the SU900, SU800, SU700 and SU650, each of which appeals to various main requirements to the consumer, such as price, outright performance, gaming performance, storage optimisation and the likes. Having experienced the SU650, the bottom of the range unit, first hand, it’s time to put the SU800 through its paces too. 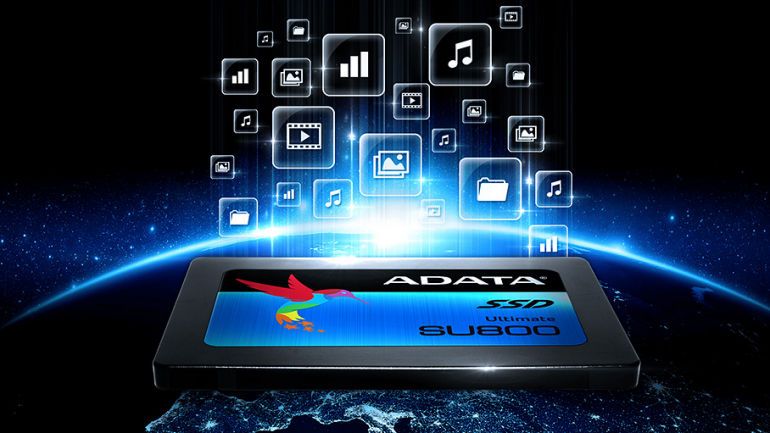 When it comes to the build of the SU800, it’s almost identical to that of the SU650, right down to the overall weight of 47.5g, and even dimensions of 100.5×69.9x7mm for the 2.5″ form factor. The unit makes use of the standard SATA 6Gb/s interface via SMI controller. This range of ADATA SSDs is among the lightest when it comes to comparative SSDs, which make for significant improvements when in use within your portable case or even in your laptop.

In terms of the build, the lightness of the device makes you feel a little uneasy at times, in addition to also seeming hollow on the inside. That said, the device will be used either in your laptop or desktop or within a protective casing as a portable, so the concern isn’t something worth overthinking. The packaging is also similar to that of the SU650, only swapping out the glossy green background for a shade of blue. But, let’s be honest, you won’t be buying this unit based on its looks. 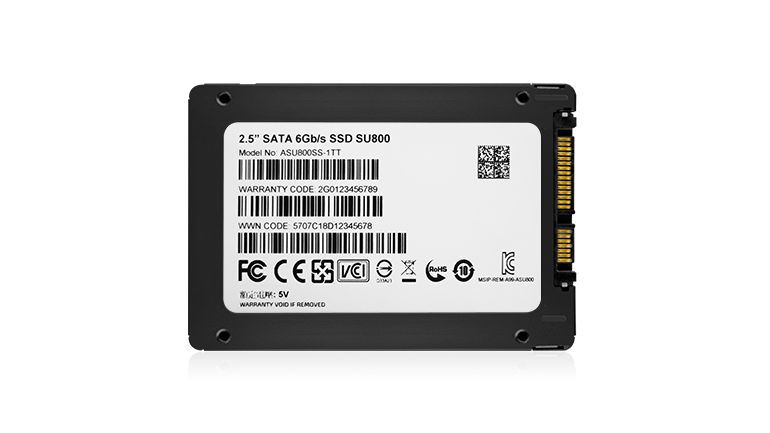 Unlike the SU650, which isn’t compatible with the SSD ToolBox available for download via the ADATA website, the SU800 is supported. The ToolBox provides some basic functionalities when managing your drive, which includes Drive Info, Diagnostics, Utilities, System Optimization, and System Info.

The Drive Info is pretty much self-explanatory, as if offers a look at information including the device capacity, spaced used, running temperature, as well as a few more important details such as the drive health and expected current lifespan. On its own, the information doesn’t offer much in the way of management, but alongside the Diagnostics feature, you’re able to run basic tests on the drive. There are two options, the first being a quick scan, which runs the diagnostic on the available space, while the full option scans the entire disk.

The SSD Optimisation is also an important part of the SSD lifespan and provides features such as TRIM, which is used to ‘zero’ unused blocks of data that has been marked by the operating system as not in use. Typically, the OS will only remove the blocks from their indexing system and not actually erase the data, making it overridable, but in fact still occupying space. It’s important, then, for the longevity of the drive to perform periodic TRIM service on the drive to balance wear over longer periods of time, and increasing its lifespan. The software also supports S.M.A.R.T and NCQ.

Finally, the Utilities option offers features such as Secure Erase, firmware update, and even the ToolBox software upgrade. One thing to note is that ADATA has already released an updated version of the firmware for the drive, which I managed to install via the SSD ToolBox software without too much fuss. 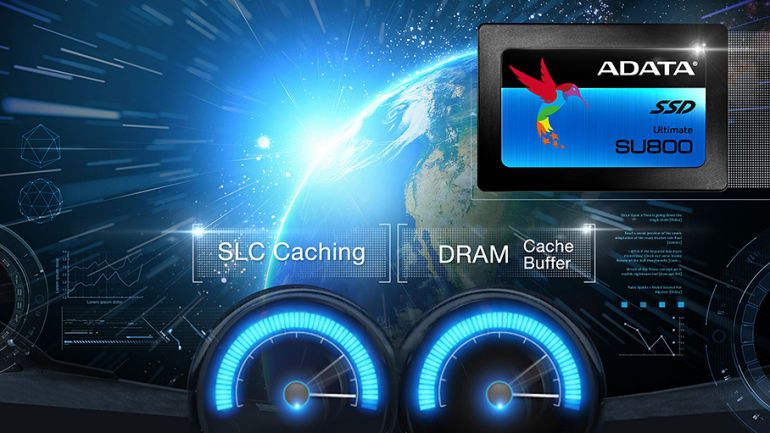 As with the SU650, the SU800 also includes the use of 3D NAND and the first 3D NAND SSD from an OEM that doesn’t manufacture their own NAND flash memory. As a result, the SU800 is available in capacities up to 2TB in storage space, thanks to the 3D NAND flash memory in use. The range of ADATA SSDs also offer a lifespan of 2,000,000 hours – or 200 years to put it into an understandable aspect. That’s not something anyone is able to test all that easily, but given their tests and actual claim, which should be able to hold up in court if required, it’s something I’d be able to agree upon.

Comparing real-world speed tests versus that of the factory specifications is something much easier to perform. Judging by the factory spec alone, the SU800 has a 7% better sequential read speed and 15% sequential write speeds. Factory specifications list the read and write speeds of up to 520MB/s and up to 450MB/s, respectively. When running through the standard benchmark software, you won’t find results too dissimilar from what’s put on paper. Real world testing, however, can sometimes provide somewhat better results when it comes to usable observations. It is noted that the same setup and OS states are required to perform the perfect comparisons. It has been a few months since the last speed test on the SU650 but using the same setup as I did previously, the results are definitely in favour of the SU800, which isn’t much of a surprise in the end. What was a surprise, however, is that in real-world testing, the result doesn’t quite match that of the factory benchmarks. The sequential read speeds averaged around 515MB/s, which deviates by a small margin. Where I did have more concern, though, was with the results from the write speeds. Due to the SLC buffer taking some time to flush data to the TLC flash, the SU800’s performance dips quite a bit. It starts off relatively fast, average well over the indicated 450 marker (sometimes closer to 500), but once the buffer has been filled, speeds quickly drop to around the 200 mark.

Doing some additional research on the issue, I found that it’s quite a common occurrence for many leading SSD OEMs. The larger sized SU800 512GB doesn’t suffer the same performance issues, as it sports a larger buffer size, which doesn’t fill the same way during benchmark tests. As a result, the write speeds observed during those tests produced a significant improvement up to 450MB/s. Even with the firmware update released in May, the results didn’t change much during my testing. Let’s hope, then, that ADATA is able to release additional firmware updates to fix this issue. When it came to the Random Read and Write tests, the SU800 performed a lot more favourably, and actually gained some ground on most of its pricier competitors. Average results observed from the benchmarks were 51MB/s and 160MB/s for the 4K Random Read and Write tests. The SU800 beat devices from Intel, Crucial and Silicon Motion for its read speeds, and narrowly behind to the Silicon Motion competitor in write speeds, still beating that of the compared Crucial and Intel units.

Where the ADATA stands out from the competition, including that of the Samsung Evo range, is in power consumption. During testing the SU800 256GB constantly outperformed its rivals across the different testing modes. During the random speed tests, the unit had a power consumption of 1.39W and 1.54W for read and write, respectively, as well as results of 1.99W and 2.20 for sequential read and write tests, respectively. For the most part, power consumption was down 20-30% on its nearest rivals, and a massive 50% less than that of the Samsung Evo units. 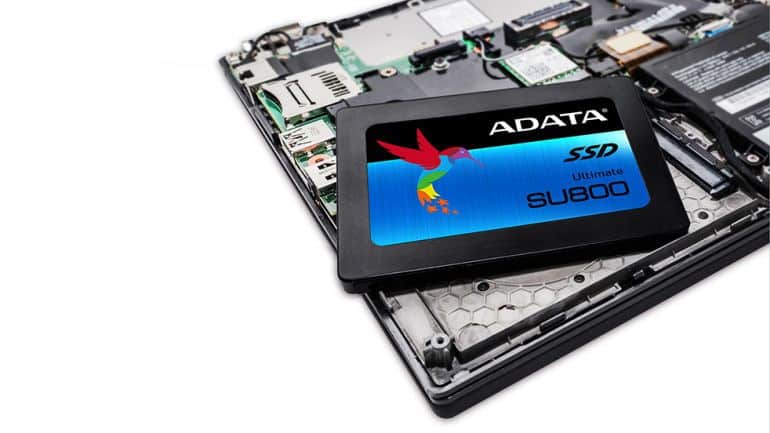 The ADATA Ultimate SU800 SSD retails for around R1,199 for the 256GB variant, which puts it in a great position to challenge the market at an extremely good price. In addition to this, the unit costs, on average, between R200-R300 more than the SU650, which is a further indication of its great value. It’s clear, then, with the extra boost in performance, that the obvious choice would be the SU800 if you’re able to spare the difference, that is. Apart from the hiccup when it comes to the buffer issue with sequential write speeds, the SU800 has a lot to offer in terms of its overall performance versus price, providing great value for money.

It is also worth pointing out, that with Samsung’s release of the Evo 9XX series, pricing for the Evo 8XX and even the Evo 7XX units are available at more affordable rates. The Samsung Evo 750 and 850 are rated as some of the best SSDs available on the market, and if you’re willing to spend a further R300 over the price of the SU800, both the Evo 750 and 850 are choices to consider. That said, R300 is quite significant when it comes to the overall cost, 25% more in fact.