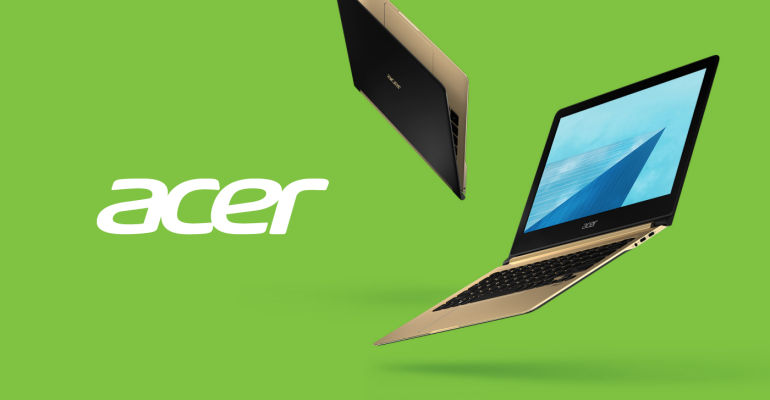 A few years ago, the Ultrabook changed the landscape of the laptop for the better. Now users were able to choose powerful and ultraportable units for their daily office needs, without being bogged down by size and weight. In the last year, however, there’s been another shift in the market, this time towards mobile gaming on a laptop. That said, it doesn’t mean to say there is no room for the Ultrabook. On the contrary. Users now have a great choice of the field between portable workhorses, gaming units, budget friendly, and even dual-purpose hybrids. Acer has recently announced the ultra-thin range of Swift laptops. I managed to get my hands on the Acer Swift 7, and these are my thoughts. 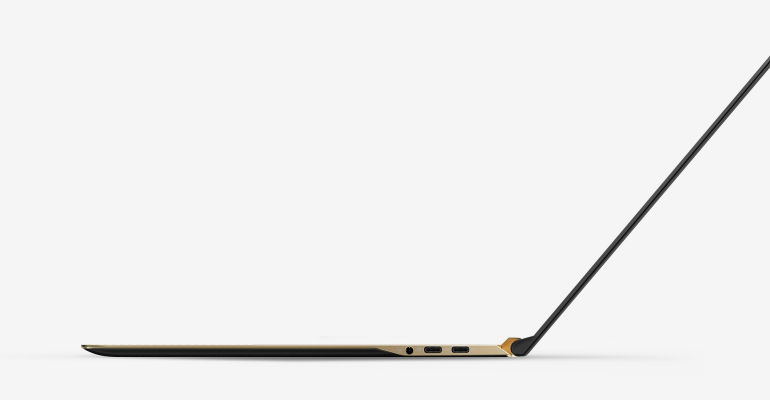 There are often terms like Ultraportable thrown around when it comes to Ultrabooks, and while they may be Ultrabooks in name, they may not always be Ultraportable. The Acer Swift 7 is amazingly portable, lightweight and paper-thin. At less than 1cm thick, 9.9mm to be exact, the unit is notably thinner than all other laptops you’ll find around the office, and it definitely shows. Not only does it mean you’ll be able to slide it into almost any bag, case or otherwise, you’ll no doubt draw a lot of attention and envy of those in the around you. The Swift 7 is also light and weighs in at just over one kilogramme, 1.14KG.

There is a bit of contention as to the actual thickness of the Acer Swift 7, which measures 9.98mm at its thinnest point, the hinge, while the chassis has a thickness of 10.9mm at its thickest point. Still, since all other manufacturers use this same logic, it doesn’t really matter, as many still don’t achieve the thinnest point, and are often above 11 and 12mm at their thickest.

Acer’s thin design is spread across a wider area than most other Ultrabooks that are often as thin as they are compact. Personally, I appreciate the additional real estate, which results in a better-spaced keyboard, something I’ve always had difficulty with on many laptops.

In terms of the ports and interfaces, due to being so thin, you’re left with just three. Two USB3.1 Type C ports, and one 3.5mm jack. The Type-C ports, however, form multiple functions, which can be used for normal USB devices, the power cord, and even supports DisplayPort over USB. Since there aren’t many devices on the market supporting Type C as yet, Acer has included two adapters, one USB-C to USB-A, and one USB-C to Ethernet. It is a bit tricky if you want to use your mouse and flash drive at the same time, which can only be rectified by purchasing an additional adapter, or a USB hub. 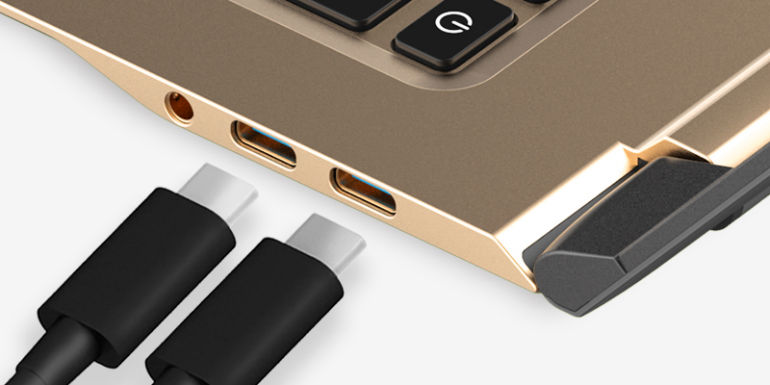 The Acer Swift 7 is fitted with an ultra-thin 13.3″ screen, which has a 1080p resolution, as well as a protective Gorilla Glass 4 layer. The IPS panel delivers great quality images that are crisp and sharp, although there are minor issues with the glossy glass screen in direct sunlight. The screen is also very bright if need be, and I found my perfect setting at about the halfway mark.

The S7 has an average screen in comparison to other Ultrabooks, most of which also feature a 13.3″, 1080p IPS panel. Where the unit does fall short, however, is the lack of multi-touch support, with no touchscreen capabilities. Personally, I hardly ever use any touchscreen features on many a laptop, but this may be a deterrent for many potential owners, who often work in collaborative spaces, for which the touchscreen comes in handy. 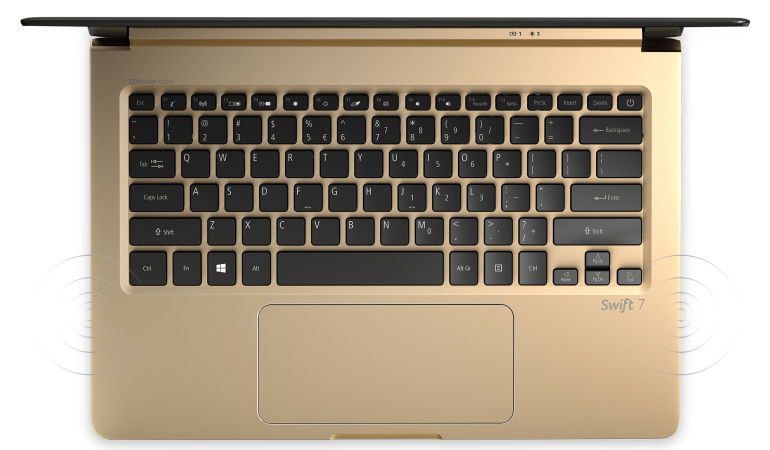 I already briefly touched on the keyboard in the Build and Design section, but not in too much detail. As already stated, the keyboard is quite wide, giving enough space between keys for comfortable and accurate typing. The chiclet-style keys also feel very responsive and have reasonable key travel to create a smooth sensation for each press. Depending on your style of typing, the keys can be really quiet or slightly louder, but all very crisp. This is actually one of the better laptop keyboards I’ve used in recent times.

The trackpad, however, isn’t as great. It doesn’t mean to say it’s bad either. The S7 has a fairly substantially sized real estate for the trackpad, which is nearly 14cm wide. This doesn’t necessarily equate to a better experience, although it does make using gestures quite a lot easier. The issue here lies in the spacing between the left and right keys, which although forms part of a single piece of metal, makes for a few misclicks. I wasn’t always able to judge the halfway point on the trackpad, and given that my fingers were used to much tighter spaces, meant I was clicking the left button for a few days before making the mental adjustment. The gestures, however, were quite good and performed pretty much all my scrolling gestures from day one without any glitches. Users can customise some of the options in the settings, like double tapping for right-click, etc. but I didn’t have any need to do so and preferred making the changes I needed to mentally, than via the settings. 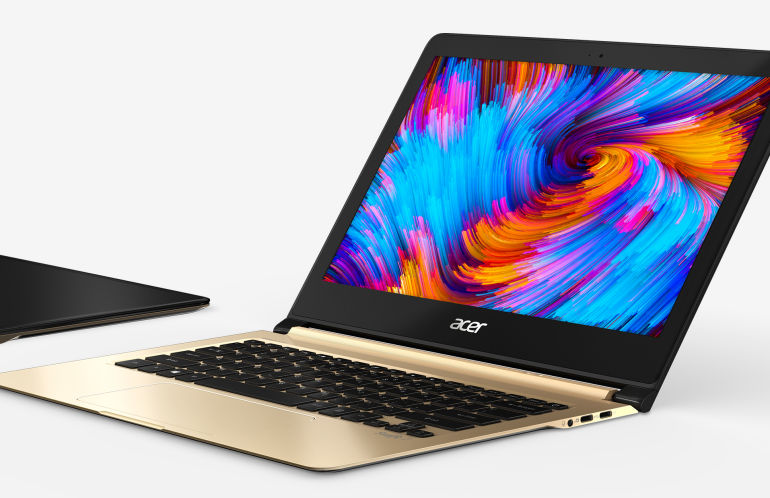 When it comes to outright performance and power, the S7 isn’t as powerful as many of the other Ultrabooks in the market. While it isn’t sluggish, however, there is a difference in load times, boot ups, and, most notably, multitasking. The Acer Swift 7 is powered by the newly released 7th generation Kaby Lake CPUs released by Intel, this specific chip being the Core i5-7Y54 CPU, which runs at a stock clock speed of 1.2GHz, although this can be boosted to 3.2GHz when required. In previous CPU generations, the CPU is equivalent to Intel’s Core M range from Broadwell and Core m on Skylake, which isn’t nearly the same beast as any of the Core i3 to the i7 range. In additional to the computational power, the unit is fitted with 8GB LPDDR3 RAM, a 256GB Kingston SSD. The SSD benchmarks indicated sequential read and write speeds of 420 and 370 MBps, respectively. Compared to other Ultrabooks that don’t use SSDs, this makes quite a big difference. Unfortunately, though, it isn’t enough to boost the performance above many of the other Ultrabooks we’ve tested previously.

Although the S7 may be down on power somewhat, it isn’t enough to break the device, even when compared to other Ultrabooks. In addition, the lower powered CPU also means an extended battery life. There are two tests to benchmark the battery life of the S7, one being that of the continuous performance test, and another for average usage throughout the day. When comparing the continuous assessment again other Ultrabooks, the unit performs well, but not significantly higher or lower, which is may be a surprise given the lower powered CPU. Where the unit does outperform many of its competitors is the day to day battery performance. There aren’t many laptops I’m able to switch out as my daily driver, but the S7 was one of the few. And it performed really great. The unit was capable, on several occasions, lasted a full day’s use in the office, with enough power to last another one or two hours at home. On the odd occasion, I’d use Acer’s battery saving Eco mode, which could stretch usage well into 11 hours of moderate usage. These tests, although not continuous power usage tests, I would still use the laptop for 10 of the 11 hours in a day.

The Acer Swift 7 is a really beautifully crafted, metallic chassis Ultrabook. The ultra-thin design and lightweight build makes it great for users on the go and fits into almost any bag or backpack. In fact, it’s so thin, I was able to slide it in the same holster as my current laptop without struggling fit. I loved almost all aspects of the build and design, minus my usual gripes with the trackpad.

Where the S7 does come under pressure compared to other Ultrabooks is under the hood, notably down on power. This isn’t a train smash, though, and I was able to perform most tasks quite effortlessly, with very little lag or too much loading time. The Acer Swift 7 launched with an RRP of R24,999 when it was announced in Q4 of 2016. After a quick browse, there were quite a number of sites retailing the unit for below the R20,000 mark, so if you are interested, do keep a keen eye out for such savings.

Overall, I really loved the Acer Swift 7, mostly because it was easy to use, easy to transport and last a full day on a single charge at the office.