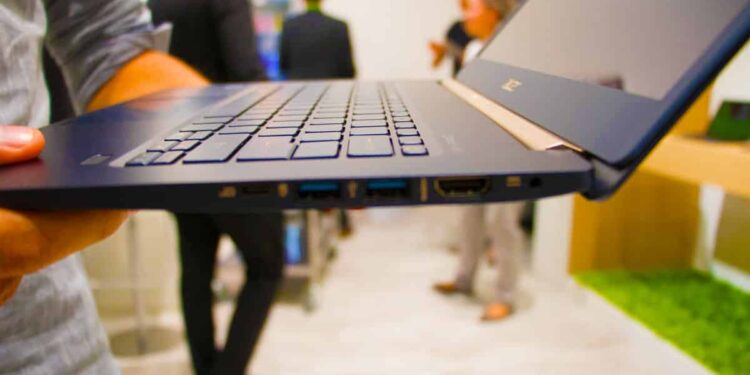 During 2017, I covered the majority of mainline units from the Acer productivity range, which included the Swift 3, Swift 7, Spin 5, Spin 7 and the Aspire R14 Ultra. The range of products featured convertibles, ultrabooks, detachables, and the likes, the norm for the modern era laptop. Some of the units have been available for quite some time, having received a refresh in September last year with the 8th generation Intel CPUs, among other small updates. The Acer Swift 5 was also featured in the list of units to receive the latest refresh, and we take a closer look under the hood. 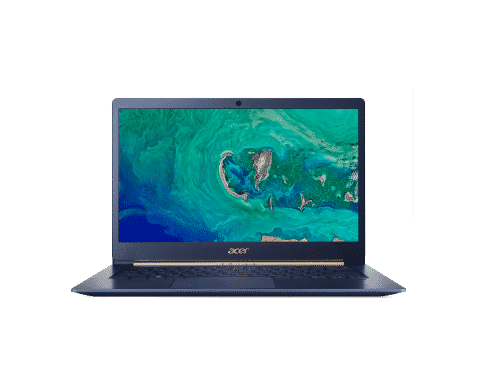 There’s no doubting the first thing you’ll notice about the Swift 5 is the extreme portability in the form of a slick design, and when you pick it up, how lightweight it is. It may not be the world’s thinnest laptop, that title still belongs to its big brother, the Swift 7, so you know it’s in good company. While not being the flagship of the Swift range, it’s still very thin, measuring just above 10mm at its thinnest. The weight too is very good, coming in under the 1KG mark at 970g. That makes the Swift 5 impressively portable, lighter than the Swift 7, which has a smaller screen to boot.

The build quality of the unit is also very good with a magnesium allow, matte finish. The design is a pleasant surprise on what isn’t considered the top of the range unit, not even within its own mini-range. The unit has a relatively blank lid, with only the Acer logo christening the centre. Flipping open the lid and the premium build extends to the metallic faux gold hinge, which is sturdy to stay the least. The single spread hinge across the width makes it very sturdy, and smooth when opening and closing, with almost no play on it at all.

The backlit keyboard is reasonably spaced apart from the arrow keys, which seem extremely compressed compared to the rest of the layout. The keys, however, only have a simple on/off feature, and not the 3-level setting as the more premium units. But that’s enough for most users, and definitely enough for me. There’s also a fingerprint reader added below the arrow keys, which allows you to speed up your login activity on Windows, and even on a few websites you choose to add.

In terms of the port allocations, the unit has quite a few. On the left, which is primarily empty, only houses the 3.5mm jack and Kensington lock. The right-hand side is where most of the activity happens, which includes a USB 3.1 Type C port, two USB 3.0 ports, full HDMI out, and power point. Being an ultrathin unit, there’s no room for a disk drive, or Ethernet port, which shouldn’t be an issue for modern users. Acer has bolted on a 14″ glossy IPS display onto the Swift 5, which has a 1080p resolution. What’s even better about the setup is that the screen is fitted into a much smaller frame thanks to the much thinner bezel around it and has dimensions not too dissimilar to the Swift 7 with its 13.3″ screen. Another of the updates to the range of Swift devices is the inclusion of a multi-touch touchscreen panel, allowing users to make better use of the screen. That said, the hinge doesn’t flip back the 360 degrees required to fully transform it into a hybrid tablet, but it isn’t really necessary in this case, and not the market it’s aiming at. It is, however, able to lie flush on the table, which does allow for collaboration between colleagues, if that’s something you may be after.

The colours are bright, and the resolution is crisp, great contrast ratio, with a very extreme viewing angle at almost 180 degrees as well. According to the benchmarks, the sRGB colour standard isn’t achieved across the full range, which means it is undersaturated but doesn’t seem that way when you’re in front of it. 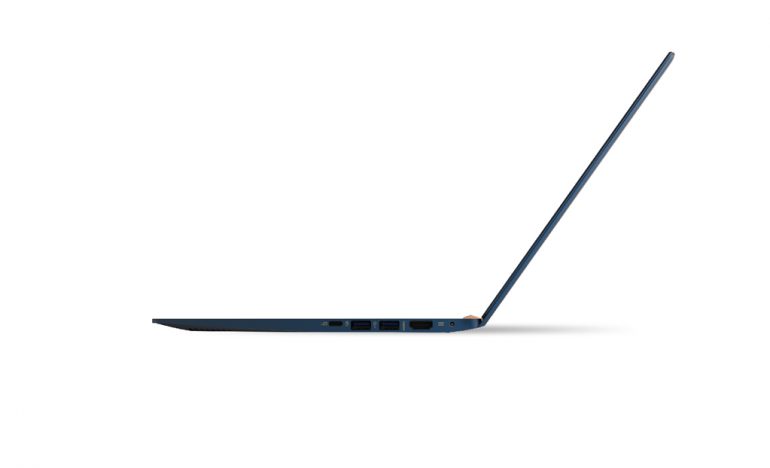 One of the more noticeable upgrades to the Swift 5 is the change from 7th-gen Intel® Core i7 CPU, to the recently launched 8th-gen. The unit we received sported the Intel® Core i7-8550U 1.80GHz, which also has 1.99GHz overclock frequency. On paper, it’s down on outright computational power, but that doesn’t really matter, all things being equal. The unit also has 8GB 2133MHz DDR4 RAM, upgraded storage capacity with a 500GB SSD, along with Windows 10 Home 64-bit. The results are very impressive with smooth and responsive across the board, with the touch gestures also very swift and accurate. Unfortunately, the paired Intel® UHD Graphics 620 is fully equipped to handle the most graphics intensive games, which means you’ll have to set all the graphics settings to barebones mode before you can enjoy smooth gameplay. That said, this unit is marketed as more of a portable workhorse than anything remotely in the gaming sphere.

The suggest battery life at factory spec suggests a life of about 8 hours between charges, and my tests achieved pretty similar results for the most part, but averaged more post 7-hour mark, with a few times reaching the 8-hour benchmark. This is slightly down on the Swift 7, which was able to achieve in excess of 10 and 11 hours of battery life. The Swift 5’s offering is still good when you consider the price point differences between the two units.

There are a few additional features adding behind the scenes to improve the overall performance for daily activities, such as the dual 802.11ac wireless connectivity, which is said to double the capable download speeds on the unit. These small features add up to quite an impressive overall unit. In addition, the upgraded CPU, screen and build all make for a pretty solid laptop. What’s even better is that it has a recommended retail price of R13,999, some R7,000 more affordable than the Swift 7. Overall, then, it may not pack as much power as last year’s Swift 7, but the upgraded Swift 5 is an all-round better unit. It is worth pointing out, though, that there’s also an upgraded Swift 7 unit, which would be interesting to compare.

The Acer Swift 5 is an impressive unit at a very reasonable price point, which makes it a very highly recommended unit if you’re in the market.