Acer Spin 7 Review – The Cost Of Being Too Thin 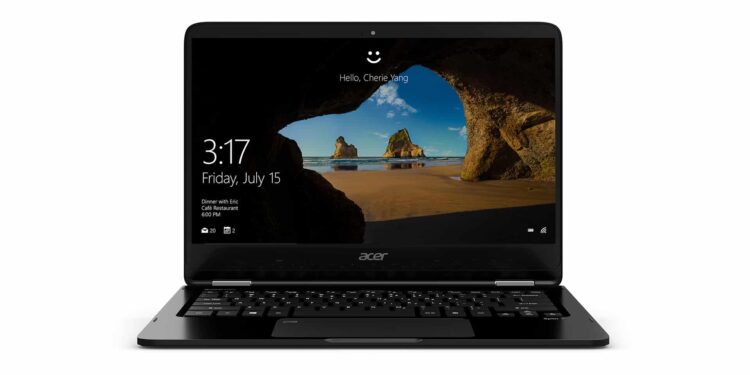 A few weeks back I reviewed Acer’s Aspire R14 Ultra, undoubtedly one of the best hybrid laptops around. The Acer Spin 7 is the younger, less powerful brother of the R14. While both devices do look sleek, the Spin 7 isn’t nearly as powerful and doesn’t fall into the same price range either.

The Spin 7 closely resembles the R14. For starters, it’s almost as thin measuring 11mm at its thinnest. It’s a bit on the heavy side, however, and weighs 1.3KG, although only around 100g heavier than the R14. It may have a few extra weight around the waist but never did feel clunky or cumbersome. The size of the unit makes up for this. The unit has a full aluminium body does well to shed some weight, and also feels and looks very sleek. That said, the matte black unit I received for review was prone to fingerprint smudges, which are also a bit tougher than normal to get rid of with a single swipe.

Being a hybrid unit, the laptop doubles as a tablet simply by flipping the lid. The lid completes a 360-degree spin, allowing for a detection point to trigger the two modes. When flipped backwards, the unit switches to tablet mode once the lid passes through 180 degrees. This, then, turns off the keyboard and only allows for touch controls on the screen (unless you’re using external peripherals). The transition is quite seamless and although not very efficient. While it never showed any issues or missed triggers during switching, there is a two-second delay once you’ve passed the trigger point. This compared to the R14, which is an almost instant switch.

Due to its slim nature, there isn’t much room for ports to be fitted to the sides. The Spin 7 makes use of two USB Type-C connectors, which also doubles as power points for charging. Thankfully, the contents include a Type-C to Type-A adapter, which is of great assistance if you don’t have one lying around. I made a note to always keep one handy as not all laptops with Type-C connectors offer this type of adapter. The Spin 7 includes a very large touchpad, which is also quite smooth and responsive, even to gestures. For those who’ve followed my laptop reviews, you’ll know I’m no fan of the touchpad for daily use, although I will admit that using the one fitted on the Spin 7 wasn’t bad at all. While I still won’t be using it for much editing and design work, for everyday usage it’s great.

That said, I found the keyboard to be quite clunky. While the spacing may not be an issue for the QWERTY layout, I found the positioning of the additional keys, such as Home, End, Print Screen, etc. to be rather oddly placed. The Home, End, Page Up and Page Down buttons are combined with the arrow keys and activated by means of the Function key on the left. For this reason, I didn’t use these keys at all. To make matters worse, the Shift, Ctrl and Function keys are very sticky, which meant that I often had to retype capitalisations or depressing the Ctrl key as a result. This was really frustrating when you’re trying to speed type your way through a review. The unit is fitted with a 14″ screen with a Full HD 1920x1080p touchscreen IPS display. The near end-to-end display means that Acer were able to squeeze the 14″ panel onto a 13″ frame. The screen has quite a good contrast at 1530:1, and covers a large spectrum of the sRGB gamut colour space. The colours are generally cooler, which means that the colours aren’t as vibrant as warmer-tuned panels as a result. This also means that colour reproduction suffers a bit as a result. It would have been great to see a higher resolution display, possibly 2K, as the 1080p resolution shouldn’t still be the standard for high-end laptops.

The touchscreen capabilities are very good. The crispness of the response felt good under my fingertips thanks to the Corning Gorilla Glass 4 being used. The swipe trail is also better looking than most, although that shouldn’t really matter. With every swipe, it looks as if you’re swiping a knife, not too dissimilar to Fruit Ninja.

In terms of the specifications of the Spin 7, the unit features very good hardware. The unit sports an Intel Core i7-7Y75 1.3GHz (overclock to 1.61GHz) CPU, 8GB DDR3 SDRAM 1,866MHz RAM, 128MB dedicated Intel HD Graphics 615 and 256GB SSD (a Liteon CV3). By all accounts, this is quite a decent return on hardware specs. Surprisingly, however, the unit doesn’t quite pack that much of a punch.

Although I won’t go as far as to say it slow or sluggish, it does underperform. This is due to the Core i7-7Y75 chip being quite low-powered in an effort to reduce battery drain. Speaking of which, those battery times aren’t great either. When fully powered and disconnect from the power socket, the Windows power icon suggest an uptime of just short of four hours. As I worked, browsed and opened a few applications, I continued to monitor the battery levels every few minutes and noticed how quickly it drops. Even when just working from a browser for an hour or two, the unit did not hit the 4-hour mark as suggested. This despite the low-powered Intel chip to save battery life. That 11mm frame has come back to haunt us, no doubt resulting in a much lower battery capacity and overall poorer battery times.

While I was able to play one or two games, it only resulted in low-setting gameplay with mixed results. I wouldn’t recommend the unit to be used for gaming by any means – unless the games don’t require much graphical support from the Intel GPU.

What surprises me the most about the Spin 7 is the pricing. While I mentioned in the introduction that the two units don’t fall into the same price category, but in a rather strange twist, it’s the Spin 7 that costs almost double that of the R14, which does a lot more for a lot less. For this reason, I’m unable to recommend the Spin 7 as your choice of hybrid device, with a lot more promise and performance from the Acer Aspire R14 Ultra.