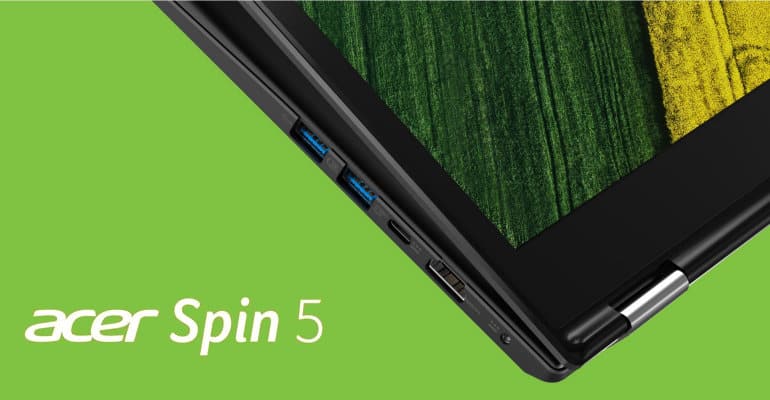 In the second half of 2017 Acer has launched quite a number of hybrid laptops across their Swift and Spin ranges. We featured a few of those reviews on Fortress, including the Swift 3, Swift 7, Spin 7, as well as the Aspire R14 Ultra. These releases not only indicate Acer’s determination to stay up to date with the latest technologies as they’re introduced to the market, such as Intel’s latest range of CPUs, but also to keep innovating to stay ahead of the game. Across the globe, the company has seen a great return on sales as a result, featuring in the top highest selling units in numerous countries. As they continue this pattern, Acer yet again tweaked its latest collection, and we’ve received the Acer Spin 5 to put through its paces. 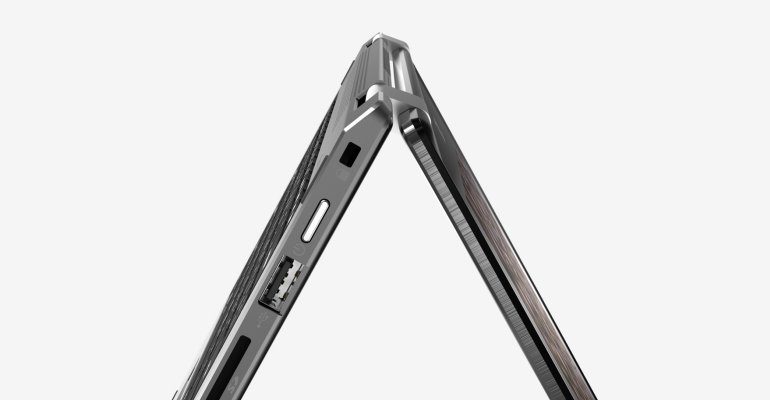 Manufacturers of late have pretty much nailed the look and feel for the convertible laptop, for the most part. While there may still be a few variances across the different OEMs and brands, we’re left with three basic features, the standard laptop mode, the nifty tablet mode, as well as the much less used, stand/tent mode. The Acer Spin 5 is no different. The hinges, though, are quite solid and have little to no play, which means that it won’t rock about as you’re using the unit on your lap, or otherwise. Even when used in tent mode, the unit doesn’t show any sign that it would open up and fall flat.

In terms of its build, the unit is made up of a mix of brushed metal and plastic. The brushed metal is reserved solely for the lid, which makes for a more premium look and feel for prospective buyers. The inner frame is constructed of plastic, and although isn’t as sleek looking, it’s still robust and sturdy. With its budget to mid-range, it’s quite expected. The unit weighs 1.6KG, making it easy to carry around, and with a compact charger included, is quite portable.

The unit includes a fingerprint reader on the touchpad, which works fine enough. The keyboard keys are also reasonably spaced for a 13.3″ device, along with a smooth touchpad, which I didn’t much enjoy using. The keys have backlight capabilities. There are also four rubber feet surrounding the keyboard, which acts as both a buffer between the screen and keyboard to avoid scratches, as well as doubling up as feet when placed in tablet mode. The unit also has a dedicated volume rocker on the right side of the unit, which is quite handy, despite the buttons being slightly thin and hard to press at times.

If there’s one major disappointment of the Acer Spin 5, it’s the poorly positioned fans. Acer has positioned the fans facing downward with very little room to breathe. As a result, the unit often overheats when used on your lap, and makes for a rather uncomfortable, and sometimes intolerable, usage. Even more bizarre was how the fans would continue to blow hot even when put to sleep. On more than one occasion I would put the laptop to sleep after usage, and then plug it into the charger for use again after a few hours. I found that the device would often turn itself on as a result, with the fans blowing fairly vigorously without prompting. I was able to circumvent this by charging in different modes, but it is something worth noting for some users. The Spin 5 has a 13.3″ screen, which features a multi-touch IPS LCD panel. The screen also has a standard 1920x1080px resolution, which looks good on the smaller screen. The screen is quite bright and has good colour reproduction, while also offering crisp viewing, making for a very good screen. Its touchscreen capabilities are also very good, and befitting of the included Active Stylus (more on this below). 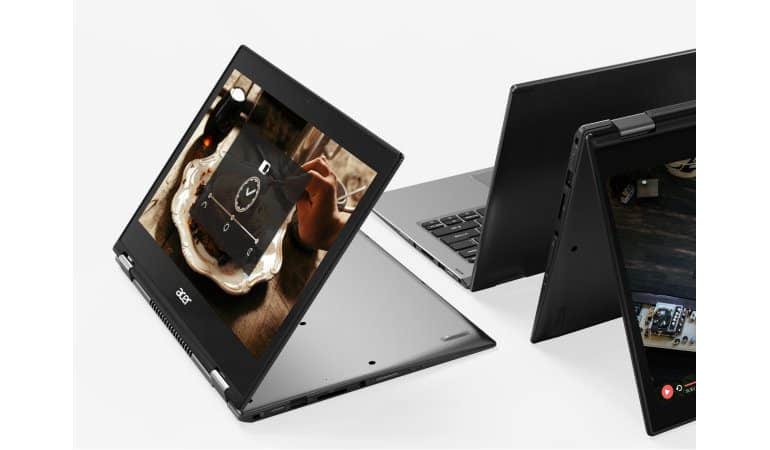 Given that the Acer Spin 5 is nothing more than a budget to mid-range laptop, you wouldn’t expect earth-shattering performances to write home about. That said, there’s still a lot to love about it. For starters, the unit uses SSD storage (256GB) instead of the standard HDD we find on other devices in a similar price range. In addition, it also includes the 7th generation Intel Core i5-8250U chipset (1.60Ghz), with the onboard HD 620 GPU, alongside 8GB RAM. These stats not only look good on paper, but they deliver in the real world, day to day performances. There were no signs of lag or slow speeds, with boot up times rather impressive. Even more impressive was its capability for 4K playback (although downscaled for the display resolution) and both video and image editing. While it may have handled video playback really well, it wasn’t as plain sailing when it came to gaming. It is worth noting that it wasn’t designed to cater for it, you are able to get away with a few games here and there.

Moving onto battery performances, the Spin 5 held up pretty well, too. Running through the standard benchmark testing, the unit managed to extend its battery life to over six hours. This is quite impressive for a unit of its size. The extended battery life is down to a number of factors, including the low-powered Intel Core U chipset, along with the smaller screen size, and even the SSD to boost performances without extracting too much from the CPU. 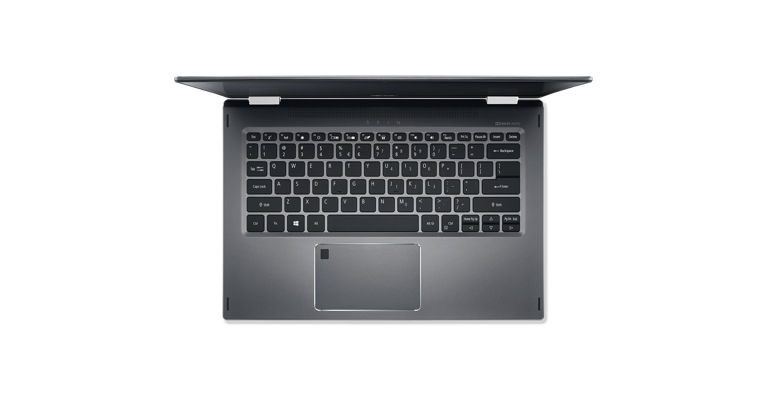 One of the aspects of the unit I didn’t particularly enjoy was the amount of bloatware, especially when it tends to remind you every so often that it wants to be used, as well as popping up after every reboot. I didn’t find much use for most of the included software, although it is good to know that users are able to uninstall these.

One of the better inclusions with the unit is the Acer Active Stylus. Again, the unit includes software to be used with the Stylus, SketchBook, which is available via the Windows Store, and can also be uninstalled. The software does a good job at picking up the different pressure points, making for some good performances while drawing. The Stylus isn’t flawless, however, and suffers from slight fluidity issues with latency errors, but still good for the most part. It’s not as good as Apple’s Pencil, but I still really enjoyed using it for a few sketches every so often. 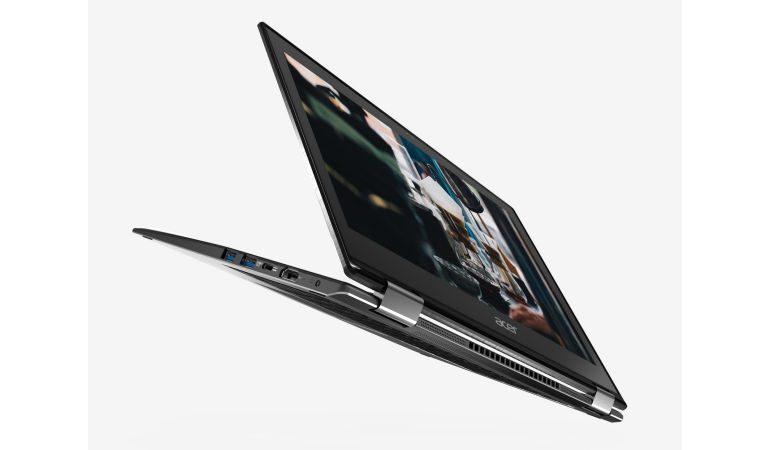 The compact Acer Spin 5 is quite a well-rounded laptop, featuring a good mix of design and performance gains over many other units in the same category. The unit is priced around R11,000, which makes it quite a good price, given the list of features and capabilities. Despite some issues with the overheating and fan, the unit pretty much ticks all the other boxes, some passing with flying colours.