While projector sales are on the rise in recent years, they’re reserved mainly for watching the occasional movie or two every few weeks, or brought out during large gatherings. Even for those who utilise projectors as part of their daily television setup, it still doesn’t fall within the bounds of consideration for most avid gamers. True, it does make for impressive viewing among friends when playing through some player on player combat games, but the same experience isn’t carried through across most other games. Acer may be able to provide gamers with a solution in the form of the Acer Predator Z650.

[dropcap]F[/dropcap]or most serious gamers it seems illogical to invest in projectors that offer sub-1080p projection when they’ve spent in excess of R5000 alone for their graphics cards able to handle 4K gaming. And then you’ll still be battling against the elements during the course of the day due to low visibility. The Acer Predator Z650 challenges this notion with a wide projection lens, able to provide maximum coverage without having a large room in which do so. We take a closer look at the Z650.

While many projectors tend towards the simple, yet premium look, the Z650 is anything but. And, unlike the solid black or white units, it’s mostly red. Bright red. The same colour scheme found on many of the other units within the Predator range. The two-toned colour scheme is split into black on the top, bottom and rear, with the red sweeping around the front and sides. The design is reminiscent of a ripple hitting a quite lake, emanating from the lens and spreading wider as it spreads outward towards the back. The ‘ripples’ also have an added effect of disguising the vents somewhat and directing airflow in and out of the unit for better cooling.

The lens is fitted to the front right of the unit, as is the case with most other projectors. And, like many other projectors, the manual zoom and focus controls are fitted exactly above it. The aren’t any height adjustment controls on the top, which has its own set of discussions, which I’ll elaborate on later. There are, however, menu controls on the top as well, further towards the back with buttons for the main menu, power, left and right controls, changing the source or display modes, and adjusting the keystone. The rear of the unit has a host of connectivity options, which will be discussed in the next section of this review.

The overall quality of the build is good. The unit feels solid without any creaking or rattling to note. The controls and buttons are firm, and the lens also has its own cover when the device is not in use. Added to the slightly outlandish design, the Acer Predator Z650 ticks all the right boxes when it comes to a projector fitting of the ‘gamer’ moniker. The unit also comes with its own carry case, power, and VGA cables.

The Z650 has a number of interfaces for your benefit. In fact, I’d find it difficult to connect all my display devices to all the available ports on offer. Firstly, you’ll find the obvious, the HDMI port, of which Acer has fitted three, two of which are directly accessible from the rear. The third is hidden below the lid, which may seem obscure, but has some merit. The hidden compartment is meant for devices such as the Google’s Chromecast and the likes, easily out of harms way, without the user needing to worry about continually bumping it as it protrudes from the back.

The other interfaces include a micro-USB port, USB power out, composite video, S-video, VGA in, VGA out, component Video, RS232, audio in, and audio out. The Acer Predator Z650 also supports wireless streaming, which you’ll have to use via the hidden wireless module. While I would have like a built-in wireless or Ethernet option for streaming, users won’t find it difficult finding wireless options to use as an accessory to the Z650. Additionally, the Z650 also supports Bluetooth audio, which you can use to stream sound to your Bluetooth headset or speakers, but I was not able to test this feature as I didn’t have any such devices on hand at the time.

As with most other projectors I reviewed, I didn’t spend much time using the onboard audio. After the first few minutes of testing, I aptly switched to my 5.1 surround sound setup. But, in all honesty, the speakers fitted to the Z650 aren’t half bad. Sure there isn’t a lot of bass to be had, but the sound is loud and clear, with only slight distortion at the maximum volume. At the higher volumes, however, you do easily notice the hollow and tinny quality, as is the case with most projector audio, but it isn’t bad when you consider it is derived from two 10W speakers (20W total) using DTS sound.

So far so good for the Acer Predator Z650, and we haven’t even discussed the performance and image quality of the unit. Acer has fitted the Z650 with a UHP lamp, which has an output of 240W at 2200 lumens. The unit has a 1920x1080px native resolution, with a maximum of 1920x1200px. When switching to a higher resolution on your desktop, it is able to display it, but downscaled to its native resolution. Acer has fitted a short throw lens to the Z650, which is capable of projecting a 100″ image at a distance below 2m away from the wall or screen. And this is the Z650’s showstopper. Most gamers will have a fairly straightforward desktop setup, so using the Acer Predator Z650 on the said desk won’t be an issue in producing an image of over 40″ within a few centimetres of the wall.

In addition, the lens has an aperture between F/2.6 (min) and F/2.78 (max). The unit also has a minimum focal length of 10.20mm and a maximum focal length of 11.22mm. The minimum projection distance is suggested at 1m and up to 5m, which produces an image in size starting from 50″ to over 300″. The maximum optical zoom is 1.1x, and 2x digital zoom. The unit also has a 20,000:1 contrast ratio known as Fierce ratio, and ColorPurity for vivid sRGB colours. The Z650 has a few additional features for ultimate viewing pleasure, which include a host of display modes, ColorBoost 3D, 6-segment colour wheel, DLP chip, 3D display, 2D to 3D conversion, and a host of others.

With all of these specs and features to boast about, it would seem a shame if it were all for naught. Thankfully, it isn’t. The image quality observed on the Z650 is everything it’s claimed to be. And while I thought the short throw projection may have a few hindering aspects, it is ultimately a huge gain for the gamers. The shorter distance between the unit and the projection means a much brighter, sharper image is displayed, which provides sufficient and accurate detail even at the downscaled 4K resolution.

And while I avidly spent quite a lot of time gaming on the Z650, I also watched many HD movies and series to test the balance between all mediums. But, truth be told, if you’re happy with the unit as a gamer, there’s almost no doubt it will be well received in almost all other segments of usage.

I ran the unit at a few different settings to observe its behaviour, even across longer periods of time. And while the unit did emit quite a bit of heat, the fans were never overly boisterous. In fact, when watching movies or series at longer intervals, the fan was barely noticeable. During gaming, however, the noise from the sound and my own PC fan far outweighed that of the projector, which was inaudible for the complete duration of any gaming. The biggest topic here is the short throw capability of the Z650. While it may be quite an impressive feature, the lack of alternative modes made me wonder why Acer only chose two projection methods on this specific unit, short throw, and ceiling. The only reason I could come up with for why it didn’t offer any rear projection options may be due to the fact that in order for the lens to project such large images at such short distances makes it difficult to offer the same options for rear projection, as it would simply be too wide, or too high up the wall (thanks to its upward projection). I tried, at length, to maneuver the unit into place from the rear, but all my attempts failed and had to be satisfied with the table-top projection in the end.

This also brings in the point on the vertical, height adjustment mentioned in the Build and Design section. While I was able to position the unit at a suitable position behind me to fit perfectly across the width of the living room, the upward projection meant that it displayed hallway onto the ceiling. The height adjustment on the lens would have worked wonders in this case, to bring the suitably clear image downward to the centre of the wall. But, alas, it wasn’t to be. Upon searching the official website, user manuals, and other online sources, it would appear that Acer does offer rear projection on the Acer Predator Z650, and while I wasn’t able to make the required adjustments, after further searches, I’m unable to verify the exactness of whether it does, in fact, offer rear projection.

I’m not a big fan of 2D to 3D conversion. In fact, I’d much rather avoid it. The Z650 did offer this feature, and did enable some degree of 3D, but nothing worth blurring my vision to enjoy. Instead, standard 3D images are much better used, and 3D enabled graphics cards to make for a good experience while gaming.

The Acer Predator Z650 projector is a really good device, and something I’d highly recommend. In fact, as I’ll be in the market for a good projector within the next year, and not happy with the sub-par 720p or lower resolution projectors, the Z650 has made my list to consider during the next few months.

At a cost of roughly R25,000, the Acer Predator Z650 doesn’t come quite as affordable as I would’ve hoped. At the same time, there’s very little I could fault on the projector, as the image quality, clarity, and sharpness was one of the best I’ve observed in my few years of tech journalism. 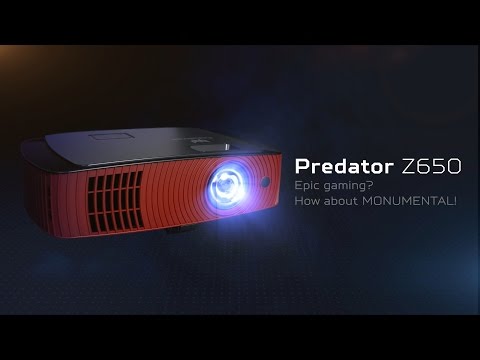