Despite the poor growth of the South African economy of late, there are still a few industries that are seeing great returns in revenue, with an equally positive outlook on their forecasts heading into the Christmas period and beyond into 2019. One such industry is the gaming sector in the country, more specifically that of gaming laptops.

One of the major drivers of this uptake has been the rapid growth of eSports in the country, as well as the adoption of many brands to back some of the best eSports players in the region. It’s easy to see the allure of many youngsters aiming to become the next global eSports star, even more so when you view some of the prize money on offer across multiple game genres and multiple games within each of those genres.

As such, manufacturers continue to release new and improved gaming gear in the country, bringing in some of the best hardware that is on offer. A few weeks back, we managed to review the Acer Predator Helios 300, a very solid mid-range unit, with a great price to boot. This time around, it’s the turn of its big brother, the Acer Predator Helios 500, to be put under the microscope. How much better is it that the more affordable Helios 300 and is the price of the Helios 500 backed up by the additional performances and features? 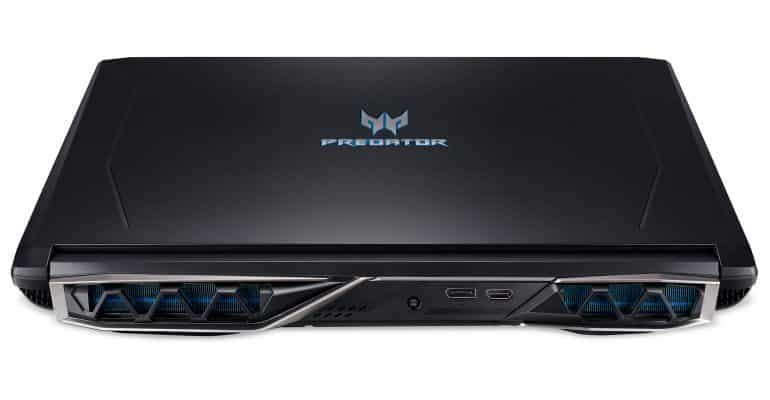 When you market a top-tier gaming laptop, it almost has to already do most of the work for you. When it comes to the design, you shouldn’t have to wonder if the unit is a gaming laptop or whether even if it’s one of the flagship products. It should be screaming this at you from the second you look at it. And that’s exactly what the Helios 500 is about.

Yes, it remains true to the design aesthetics of the other Predator gaming units, as with the Helios 300, but it stands out from the crowd just as easily. One of the more prominent features of the design is the ventilation system. The vent grille design continues to the sides of the unit as well for additional ventilation, tying in the look all across the frame. This has become someone of a power statement by manufacturers when designing their gaming units, as the oversized, jet engine style vents aren’t really a necessity by today’s standards.

Not only do the CPU and GPU units run far more efficient and require less cooling, there’s also a small matter of liquid and heatsink cooling that has also become common in 2018. The protruding rear on the Helios 500, then, is nothing more than showboating. But I love it just for that purpose.

The premium design elements continue to the inner side of the unit once the lid has been lifted, which includes separately highlighted WASD keys and trackpad, as well as an over-sized power button, resembling some kind of high-tech, spaceship ignition. Speaking of the lid, it’s not capable of opening beyond the 135° mark. It isn’t so much of an issue, but would have been appreciated if it could extend a little further. The hinge on the rear doesn’t feel as firm as it did on the Helios 300, although it’s not a worrying issue, with only a creek or two to speak of. While there are rubber feet on the inside of the lid to protect the screen from scratching on the keys, there aren’t any rubber feet underneath the unit to prevent it from slipping on surfaces. 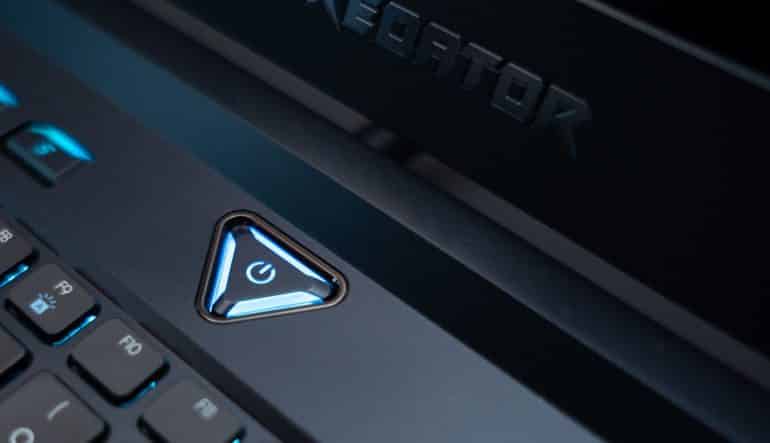 The unit, however, doesn’t have a metal frame or finish. Instead, Acer opting for a plastic build. Since the unit is fairly hefty as it is already in terms of weight, at 3.8KG, having included an aluminium metal finish may have pushed the weight up even further. The Helios 500 isn’t about being the slimmest and sleekest unit, measuring 428x298x38.7mm. To put that into perspective, you could almost fit two Razer Blade laptops within the same thickness 38.7mm thickness. The unit has an angled finish from whichever perspective you’re looking at it. The lid and body are angled at the edges, as with many other units, including the Helios 300.

On the left-hand side, the unit features an RJ45 port, x1 USB 3.0 (with always-on charging) and x2 USB 3.1 Type-C ports. Switching to the right-hand side, the unit includes a Kensington lock slot, x2 USB 3.0 ports and x2 jacks for a headphone and microphone. There’s also room between the grilles on the rear, the unit also sports a power jack, a Display Port and an HDMI 2.0 port with HDCP support. More often than not, I don’t spend too much time using the onboard speakers on laptop, mostly because I can’t handle the tinny sounds for too long at a time. Either I use the speakers on the connected monitor or TV using an HDMI connection or the surround sound system if I’m able. On the Helios 500, the team has fitted a pair of speakers along with a pair of subwoofers to accompany them. This is quite an impressive feat, which put the unit’s thickness into perspective.

The speakers are powered by Dolby Audio software, which provides good audio quality.

The speakers are powered by Dolby Audio software, which provides good audio quality. Sounds are clear, with a distinction between many instruments when listening to music. The bass is a little soft on the whole but still a lot better than many other units that don’t often include a woofer, let alone two. There’s a good mix of low, mid and high frequencies represented, with the midrange suffering the most overall. Despite all the branded speakers and partnerships we’ve seen on other units over the years, the Helios 500 has a good enough system to beat most of those.

In terms of the keyboard, despite the separate colour allocation, the WASD keys aren’t any different than the other chiclet keys. The right-hand side of arrow keys are shifted lower than the rest of the keys and, as mentioned previously, they have separate colours (with the WASD keys) than the rest of the keyboard. There are an additional six function keys above the conventional function keys, which can be customised with shortcuts and macros for your personal use, especially useful in games.

The touchpad is also highlighted in LED lights as with the WASD and arrow keys. Unlike many modern-day pads, this one includes two distinct left and right buttons, making it easier to use overall. The touchpad is smooth to touch on its matte grey finish. The accuracy was good and along with other touch-based gestures. 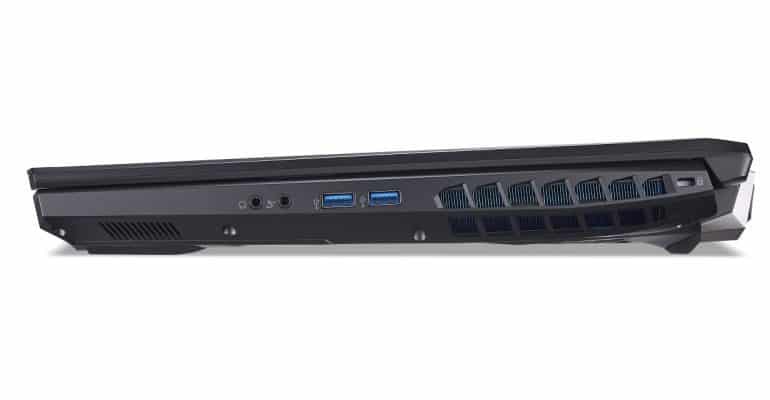 The Helios 500 sports a 17.3” size screen with an 1920x1080px resolution display. The FHD panel has a 144Hz response time and also supports G-Sync. The screen itself has a matte finish, which diminishes the colour saturation, low contrast ratio and overall brightness as a result. Taking the unit outdoors, you will still be able to view the screen perfectly well, irrespective of the brightness.

The colour spectrum produces fairly low results with 91% sRGB and 59% Adobe RSGB. It doesn’t matter too much when it comes to gaming, but more of an issue for designers, editors and the likes. When it comes to the response times, the unit has an impressive 9ms for monotone colours and around 14ms when running across the full-colour spectrum. The latter isn’t that great for professional gamers, but it’s more than adequate for regular usage. 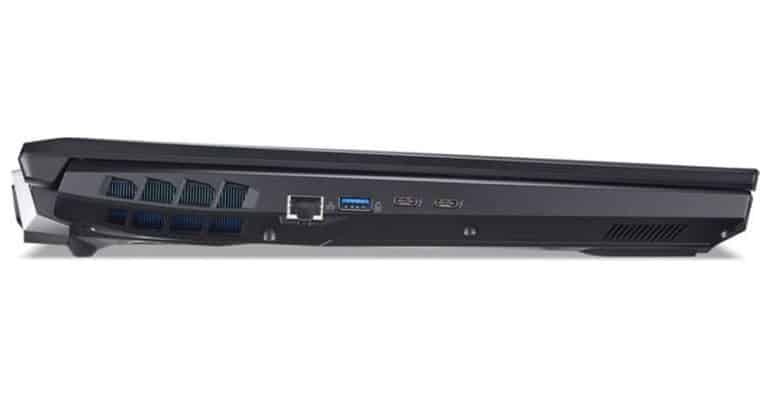 There are many variants of the Helios 500 to choose from, ranging all the way from entry-level specifications, to the latest hardware. The unit we received, the Predator PH517-51, sported an Intel Core i9-8950HK with 32GB RAM, which is quite a powerful combination. The performance is quite impressive, to say the least, mostly thanks to its overclocked 2.9Ghz CPU. Boot times were immensely quick, which was aided by means of the 256GB m.2 SSD, which recorded read and write speeds well above the 350MBps mark. In isolation, these speeds are great, but doesn’t match some of the leading units which push speeds closer to the 500MBps mark. There’s also an additional 1TB HDD for storage of music and other media you don’t often need to access at lightning speeds.

For many games, the GPU managed frame rates in excess of 140fps on High to Ultra settings.

In addition to the outright computing performances, the Helios 500 also sports a Nvidia GTX 1070 graphics card with 8GB VRAM and G-Sync. The GPU is overclockable, which makes it pretty handy when called upon. This feature can be accessed via the included PredatorSense software, which comes preinstalled on the unit.

For many games, the GPU managed frame rates in excess of 140fps on High to Ultra settings. For more graphics intense games such as Tomb Raider, GTA V and the likes, the frame rates dropped to around the 55fps mark, which is still more than admirable. Across most of the benchmarks for gaming units in the same category, the Helios 500 was able to reach frame rates between 10 and 20fps better on average.

As mentioned previously, the unit includes a few preinstalled applications. Some of these are Acer’s Predator software, which are quite useful. The full list of installed software includes Killer Control Centre, Nvidia GeForce Experience, PredatorSense, Netflix, eBay, Acer Collection, Translator, PowerDirector for Acer, PhotoDirector for Acer, Adobe Photoshop Elements 2018, Office 365, LinkedIn and Norton Security. Most of these can be uninstalled if you wish, as you wouldn’t necessarily require half from the list.

When it comes to battery performance, the Helios delivers a mixed bag of goods. From our tests, the unit was able to eke out an average of around 140 minutes for continuous web browsing, roughly 300 minutes of continuous video playback and then down to about 90 minutes of gameplay. One of the issues with the G-Sync is that it’s battery intensive, as it doesn’t allow the unit to switch to the onboard GPU to save on power. 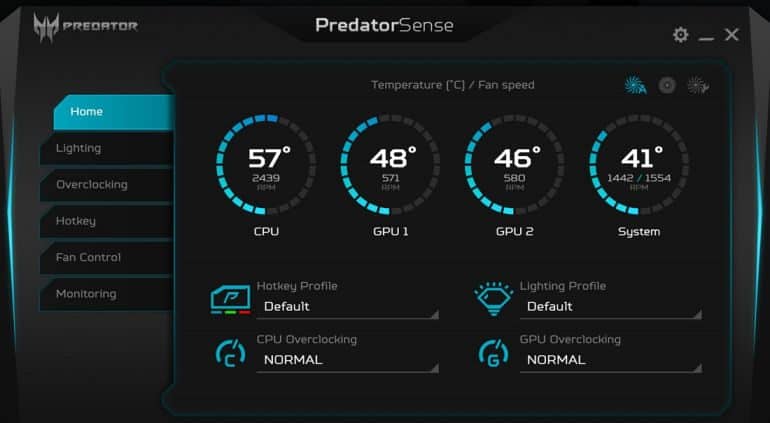 The Acer Predator Helios 500 is a great unit when you consider all that it has to offer. What’s interesting about the unit, however, while it may be a great gaming laptop, it’s not a great mobile gaming laptop. With a lack of colour spectrum and brightness on the screen and relatively low battery life, for best results, users would be better off having a separate screen and a continuous power source. Once you managed to get passed these lowlights, the unit steps up its game and delivers some of the best benchmarks across the board. Thanks to its Core i9 processor and Nvidia GTX 1070 graphics card, the unit is more than capable of handling any challenge thrown at it.

With an RRP of R39,999, the unit is expensive, whichever way you look at it. Once you catch your breath when you realise the price, you’ll realise that the unit is well-deserved of its price. Apart from the two issues mentioned above, the unit packs quite a punch. It is worth noting, however, that since its initial released in Q3, you will be able to spot a few deals heading into the festive season around the R30,000 mark.

The Acer Predator Helios 500 is a beast of a gaming laptop, and while it lacks overall mobility, it's still one of the best units available.