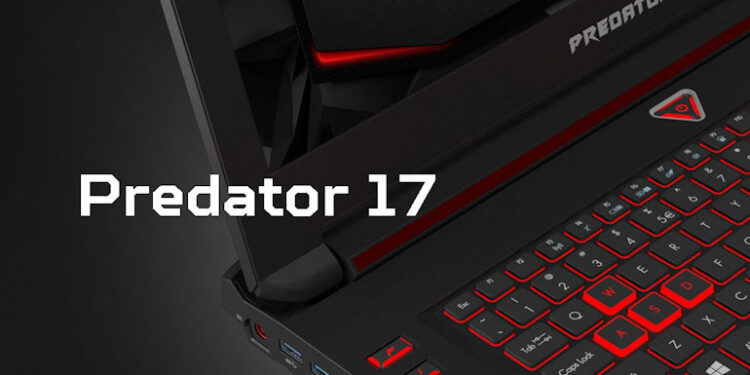 Over the past few months, Acer has gone on the offensive with their Predator range of gaming products. While the brand has been around for close to a year now, having earlier this year launched in South Africa as well, they continue to push the boundaries. And if the recently announced Acer Predator 21X (first laptop to sport a curved screen, while also having a GeForce 1080GTX SLi setup) is anything to go on, we can expect a few great products on the horizon. What makes the Predator range so appealing isn’t necessary Acer’s willingness to design and manufacture great gaming gear, but the price at which it’s delivered to the consumer is extremely competitive. Having previously review the Predator Z35 Curved Screen, Predator G6 gaming rig and Predator Z650 projector, we complete the lineup with the Predator 17 gaming laptop.

Upon receiving Predator 17, it was still Acer’s top of the line gaming laptop, and technically, it still is until the 21X is officially released for purchase. If looks were anything to go by, this red monster could easily fend off it’s competitors, but this is a tech review, so I have to put it through its paces. And that’s exactly what I did. As suggested in the introduction, the Predator 17 is a mean looking laptop. The unit has an imposing presence with enormous exhausts, I mean fans, across the rear. The red tints across the entire design make for a flashy finish, even more so when they light up upon start-up. While the keyboard has the default setup of red backlighting, but can be customised not just in colour, but also for the different segments, the keypad, gaming keys, and QWERTY keys.

Despite its aggressive looks, the build is mainly plastic. But that doesn’t mean that its cheaply made or shortcuts taken. Anything but. The soft touch finish makes it easier to use as well. The unit feels durable with no squeaks or creaks to speak of. But, this solidness comes with a price, a real heavy one. The Predator 17 weighs in just shy of 4KG, 3.96KG to be exact. The unit doesn’t fit into most laptop bags either. Gaming on your lap isn’t as uncomfortable as you’d expect given the bulk, and even less so thanks to the cooling system. Apart from the default fans, the unit also comes with an additional, reverse fan, which swaps out with the Blu-ray drive. This, the auxiliary FrostCore cooler, can temporarily reverse the airflow and flush out dust for better breathing, so to speak. That said, the cooling system isn’t as quiet as you’d expect from a premium device, but rather that than smoulded.

In terms of the interfaces and connectivity, the Predator 17 covers all the bases, which includes x4 USB 3.0, Thunderbolt 3 (USB3.1 Type C), DisplayPort, HDMI, Ethernet, Wi-Fi, and Bluetooth. The audio is also great on the unit, thanks to the included subwoofer, which has its sound airflow from beneath. As the name suggests, the unit has a 17.3″ screen, which has an Active Matrix TFT Color IPS LCD. The colour reproduction is good and the screen is bright, which also makes use of a light sensor. The specs sheet lists the screen’s brightness at 307 nits, which is quite good, but not quite the brightest. The resolution isn’t that great either, and while it is 1080p, a 4K resolution would have been perfect on the Predator 17, or at least something in between, as the graphics card is more than capable of supporting higher resolutions. Interestingly, though, the unit is able to support 4K when an external monitor is connected, so it’s definitely an option. While the Predator 17 does have a DP connection, it doesn’t support Nvidia G-Sync on it’s own screen, but does on an external screen.

But, these are just numbers on a piece of paper and don’t really mean much without experiencing them first hand. The screen isn’t bad, despite it’s low resolution. In fact, I had no quarms when gaming or watching movies on the 17″ screen. The colours were brilliant, and not oversaturated either. Users also have the choice of colour modes to choose from, productivity, photos, movies and games, which you can easily switch by means of a simple click of a button. Across all variants of the Predator 17, Acer has added the Intel Core i7 6700HQ processor. The variations come in the forms of storage and RAM capacities, and the version I received had 16GB of RAM and a storage combination with a 1TB HDD and 256GB SSD. Personally, I feel that the combination is extremely good for a gaming laptop, and can easily compete with many of the top dogs who’ve been around for much longer creating gaming laptops. Furthermore, Acer includes the PredatorSense software, which allows users to overclock the CPU if and when required, and, again, all from a simple click of a button.

Running a few benchmarks tests, you’ll note that the Predator 17 is right up there with the best, beating out quite a number of its competitors. There are, however, some scores where the unit doesn’t fair as well, such as the SSD speeds. While it still dramatically increases performance over the standard HDD, it’s down by 33% on a few of its rivals, and almost 50% on the top score.

After running a few tests and benchmarks I tried throwing everything, but the kitchen sink at the Predator 17, running multiple tasks in the background even while playing a game or two. But, despite my efforts, the unit was able to withstand these tests, with only a slight increase of the fan speeds to let you know it’s busy working hard in the background. The overclocking capabilities also make light work of these additional tasks, which is a huge plus.

With an Nvidia GeForce GTX 980M bolted onto the Predator 17, gaming was always going to be a pleasure. The setup was more than capable of running all games at well above 60fps when running on the default 1080p resolution. Cranking this up to a 4K resolution (which downscales to 1080p on the screen itself) the laptop was still able to power through some of the games above 30fps. For a few of the games that are notoriously heavy on resources, the unit still managed to play at respectable levels, but would often drop below the 30fps mark.

Running through a few more benchmark tests on the graphics capabilities, the Predator 17 does slide down the list, but still above average, when compared to its more respectable CPU performance scores. Using Nvidia’s Geforce Experience software, you’re able to optimise each of your games for better performance, some switching up to 4K, while others set to 1080p. Playing the games after running the optimisation makes quite a big difference for the 980M. I had great fun playing through many of the games in my Steam library I’m not always able to crank up to maximum performance on my own gaming rig (if you can call it that). I was easily able to play games like Project CARS on maximum graphics settings.

The unit is also fully capable of both 4K and Virtual Reality gameplay, which is a huge bonus making it future-proof.

If you’re looking for a few bundled applications on this laptop, you’ll be surprised to find that there aren’t many to speak of. And, what it does include is quite useful and nice to have. Firstly, there’s the Acer DustDefender, which pairs with the FrostCore fan when inserted into the Blu-ray drive slot. Then there’s the Killer Network Manager, which monitors the network usage and settings, and the XSplit Gamecaster that allows you to livestream your gaming footage. And finally, you have the PredatorSense software, which allows you to not only set the overclocking speeds, but also toggle the lighting and check temperatures, and, mostly importantly, the profiles and macros.

The Acer Predator 17 is packed with quite a few good features, and yet still remains rather simplistic in its approach. And when I say simplistic, I’m not in any way referring to its design, which can easily stand out from a pile of gaming laptops of the same calibre. Pricing for the Predator 17 depends on where and when you purchase, as the exchange rate continually affects its cost. The RRP for the unit starts from R29,999, although prices can be as high as R40,000 from a few major retailers. At R30k, the unit is pricey for a gaming setup, especially when there’s no 4K for the built-in screen. On the other hand, there is quite enough there to justify the costs, especially when you do a direct comparison to prices in the US.

The Predator 17 ticks quite a few of the right boxes, and while it may not be everyone’s cup of tea, it can easily compete amongst the heavies.