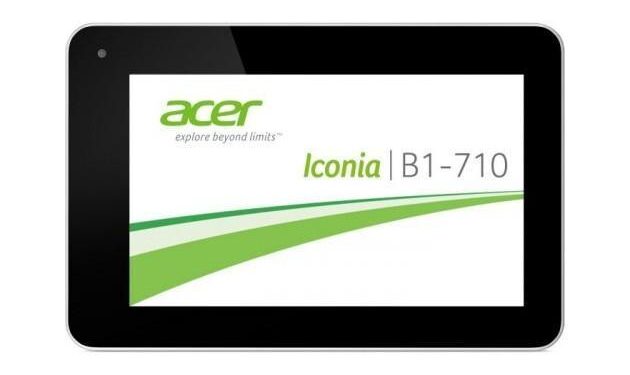 During the launch event for the Iconia A1, Acer also showcased their smaller-sized, Iconia B1, which was, in fact, announced a good three months before the former. While it may have been overshadowed by its larger-screened big brother at the event, it didn’t go entirely unnoticed. The Iconia A1 may claim to be tablet for use in one hand, but it’s the Iconia B1 for which this statement holds more water, with a screen measuring 0.9” smaller. Despite the launch of the version 2 Nexus 7 tablet, it’s the 2012 device that still sets the benchmark when it comes to budget 7” tablets. A comparison between the Asus Google Nexus 7 and the Acer Iconia B1 was always on the cards. Compared to the Iconia A1, the B1, too, doesn’t match up. From its design, look and feel, to sheer performance, the B1 doesn’t quite live up to the same standard. Although it may be one of the lightest tablets available on the market, it does little to make up for the cheap plastic feel, and creaky finish. The introduction of coloured edges does soften the blow somewhat, so it’s not a complete fail on that front. The display isn’t nearly as crisp, with viewing angles almost non-existent when not viewed straight on.

While Google has gone to extra lengths to ensure a smooth and buttery operation of its Android, the Jelly Bean OS feels surprisingly laggy, and non-responsive at times. The overall build of the OS doesn’t feel anything as polished as with the A1, even spitting out a few errors and bugs during normal use. Attempting to run apps for browsing and reading emails are easily manageable, and low resource games are smooth and enjoyable. Switch it up a gear with a few performance apps, and slightly more resource intensive games, and you’re left with a few jitters and occasional pause between frames. Stepping it up even further and you’re left with a frozen state and plenty of force closes for your troubles. Upon receiving the Acer Iconia B1, there seemed to be some charm to the small, light-weighted tablet and its 7” screen, which quickly dissipated into frowns and pessimism. Even with its budget tagline, the Iconia B1 could have been something worth considering, but the unpolished version of Android pre-installed on the tablet has ultimately caused most of the problems. I can appreciate the attempt to offer a more complete package of features and functionality, but when the OS suffers as a result, a basic and lightweight version would have served more purpose.

The Acer Iconia B1 has a retail price half that of the Nexus 7 in the States, with a RRP of R1,999 (slightly lower in certain places) in South Africa. If you’re truly interested in a budget tablet, there are even cheaper (unknown brand) options out there, although it’s safe to say, with even more software concerns. In the end, the Iconia B1 is exactly what it says, a budget tablet, unfortunately with no extraordinary surprises to enjoy.