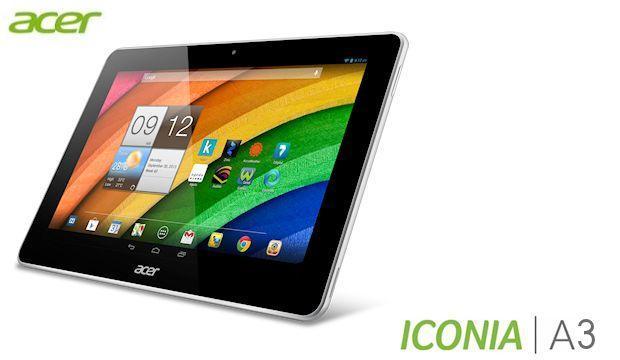 In the third quarter of 2013, Acer launched their new line of tablets, which included the 7.9”, Iconia A1, and 7”, Iconia B1. A few months later, the company launched a slew of devices at a product showcase, which also added the 10”, Iconia A3 to their tablet line-up. The Iconia A3 was not designed to take on the likes of Samsung’s Galaxy Tab and Note range, the iPad, or any other tablet within a similar mould. Instead, Acer offers you an alternate to the high-end, high-price tablets with something slightly more basic, while still getting through everyday functionality for those on the go. At first glance, the Iconia A3 looks identical to the Iconia A1; simply a larger version. There are no premium materials used in designing the chassis, but, at the same time, doesn’t scream “cheap.” The matte plastic, white rear looks decent, with rounded corners and glossy black bezel front. There is also a silver trimming (a somewhat brushed metal imitation) along the sides of front bezel, adding some appeal. The A3 feels soft to touch, and does have the slightest of flexibility when bent. It is a tad on the heavier side at 560g, but nothing overly concerning here. All-in-all, it’s comfortable to hold, and pleasing on the eye.

The A3 sports a microSD slot, micro-HDMI port, USB port (including charging), 3.mm audio jack, power button, and left-channel speaker on the left side, while the right is home only volume rocker and right-channel speaker. The speakers offer Dolby Surround Sound, which isn’t half bad. Unfortunately, as with many other tablet designs, the speakers are positioned toward the base of the device, easily being blocked by your hands during normal use. Unlike many other tablets and smartphones available these days, all the ports are open, leaving them exposed to dust, and possibly liquid. In terms of display quality, the Iconia A3 is fitted with a 10.1” display with a 1280x800px resolution at 149ppi. While it does not offer a full HD experience, it is a step up from the 1024x600px resolution of the Iconia A1. The LED-backlit, IPS2, LCD capacitive touchscreen offers decent viewing under normal conditions, but when it comes to text, and images with more detail, the resolution isn’t capable of performing near what we’ve come accustomed to over the years. This is where the concessions on affordability come into play. Under certain conditions, it appears almost as if you’re able to count each individual pixel on screen, something that should never transpire. During video playback, the pixilation isn’t as obvious as with still images and text.

In terms of its colours and brightness, the A3 performs aptly. There are few occasions when colours appear weak, but are bright and vibrant enough during normal use. Contrast, too, isn’t too watered down, and slight greys in black backgrounds are only really visible in darker environments. This is most likely caused by the backlit LCD screen. In direct sunlight, there’s an extreme amount of glare on the screen, which becomes even harder to view after using the touchscreens, as it picks up your fingerprints over time.

While many OEMs are leaning towards running Qualcomm SoCs, the Acer Iconia A3 is fitted with a Mediatek MT8125 chipset with a Quad-core 1.2 GHz Cortex-A7 CPU and PowerVR SGX 544MP GPU. This is the same chipset found on its sibling, the A1. Without slating Mediatek SoCs, it doesn’t quite deliver the same standards as other leading chip manufacturers. The Chinese company has made quite large strides over a short time, and will soon be offering even greater performances, hopefully maintaining its ‘budget’ status. The rest of the hardware specifications include 16/32GB internal storage, 5MP rear-facing camera, 3540mAh battery and 1GB RAM.

There are a few noticeable lags and framedrops during browsing and gaming. Users should avoid a few of the more graphic-intensive games available on Google Play (ShadowGun, Modern Combat 4, Real Racing 3, Asphalt 8); while it is able to run these games, the experience isn’t something that will keep you coming back for more. It simply gets the job done without too much left in reserves for additional features.

Acer states that the “Iconia A3 was designed to offer an unrivalled user experience and features advanced accelerometer technology called IntelliSpin.” This technology allows the device to detect the rotation of the screen, even on a flat surface, and rotate as required. This may be true, but the overall experience it derives isn’t always ideal. Sometimes just placing the A3 on a surface is registered as a rotation, and the actual rotation of the display is lagging a tad. Acer has again included the Acer Touch WakeApp features, which allows users to activate the device with a simple touch on the screen with different gestures performing different functions. This is carried out a lot better than previously observed. Surprisingly, Acer have fitted the A3 with a 3540mAh battery. This may not seem too much of an issue, but compared to the A1’s 4960mAh battery capacity, we’re a little dumb-founded on this one. On a device that would have more room to fit a larger battery (based on size alone), as well as the increased cost over the A1, with a larger screen, it just doesn’t follow any logical conclusions. This is not to say that the battery doesn’t perform well: it still lasts a reasonable amount of time, with 11 hours of continuous use. In fact, the battery can easily last two to three days under normal usage with a few heavy usage moments thrown in every so often.

The Acer Iconia A3 had a launch price of R4,999, which already made it one of the more affordable 10” tablets available. Shopping around today, you can easily pick one up for a sub-R4,000 price, making it even more affordable. The biggest problem with the Iconia A3 is the Iconia A1. With the major difference being the 7.9” vs. 10.1” screens, I’d be in favour of leaning toward the A1, simply based on affordability, at pricing under R3,000. If you do explicitly require a screen of 10”, without reaching too deep into your pocket, the Acer Iconia A3 isn’t a device that will let you down easily. Getting through a complete work day, without the need to be overly concerned of its battery, makes it a good buy.