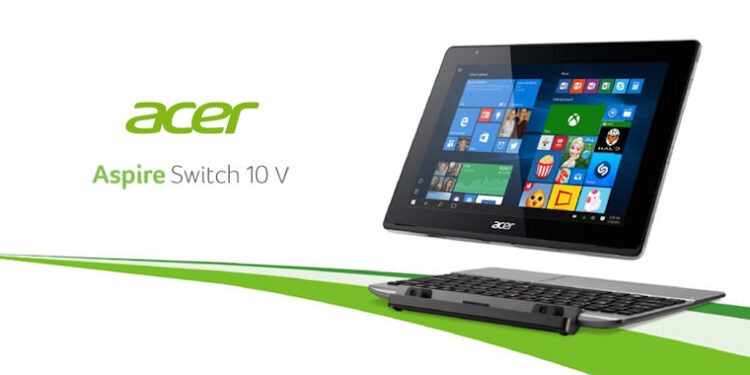 Acer has a broad range of products across multiple categories. Two years ago, the company released the Aspire Switch 10 unit, which received a few mixed reviews from the tech community, although it was still a step in the right direction for the hybrid tablet. A short while back, Acer released an updated version of the hybrid in the form of the Aspire Switch 10 V, with a few improvements thrown into the fold.

The convertible tablet has not been redesigned all that much in terms of its design, but more in terms of its hardware. Based on the specifications alone, the Acer Aspire Switch 10 V seems to provide a lot more power for the portable unit. We take a closer look at the unit and find out whether the upgrades are enough to power the Switch 10 V to the top.

As stated in the introduction, not much has changed on the Switch 10 V over its predecessor in terms of the design. The unit still has a brushed silver finish, with overly rounded edges. The hybrid is not known for its good looks as there are much better looking, sleeker convertible tablets on the market. Interestingly, the new version is 100g heavier than the already bulky predecessor, the 10 V weighing Iin at 1.2KG. The weight distribution is almost evenly split with the display unit only slightly heavier.

While the design isn’t breathtaking, the build quality is still good. There were no squeaks to speak of and the display fit snuggly into the keyboard portion. The display aligns easily with the dock, and there’s an audible click when the unit is docked. The docking strip has a magnetic strip along the base making it easy to snap into place without too much fuss. There are no additional buttons to hold the display in place, as the magnets are strong enough to lock it down in position. The strip does, however, have a 10-pin connector to make communication between the two portions, which work a lot better than many of the Bluetooth-enabled on similar hybrids.

In terms of available interfaces, the 10 V has a DC-in for charging, a USB3.1 (type C) port, a micro-HDMI, 3.5mm auxiliary, and microSD reader. All of the ports are positioned to the left side of the display, with the power button, LED light, volume rocker and Windows Home key all on the right side. There is also a single USB port on the right-hand side of the dock. As the name would suggest, the Switch 10 V has a 10″ screen (10.1″ to be exact), which is fitted with an IPS panel with an active matrix TFT colour LCD. There are two variants of the display for the said panel, one with a 1280x800px resolution, the other with a 1920×1200 resolution. Having received a review unit fitted with the latter, picture quality was sufficiently crisp and bright. It won’t match up to a few other premium tablets with 2K resolution, but in terms of Windows hybrids, it’s right up there. There’s very little to fault about the unit’s screen and display, although there is a slight difference in brightness output from the screen when it’s not docked, even with the brightness set to 100%.

The response times of the panel are sufficient not to stutter during high frame rate video playback, although I wasn’t really able to test this out during gaming, as I will touch more on later. The colour depth and contrast are good, with a good palette of greys and dark blacks. The glossy display looks impressive indoors, but doesn’t play as well in direct sunlight, so it’s safe to say that it won’t be usable outdoors. On the surface, the Switch 10 V hasn’t changed much, but thanks to Intel’s Cherry Trail chipset, the performance gains is something worth noting. The unit sports an Intel Atom x5-z8300 chip with a Quad-core 1.44GHz CPU. Even more impressive is Acer’s Turbo Boost software, which allows users to boost the CPU to 1.84GHz, if ever you’re in need of more power. Running on Windows 10 Home 64-bit, you won’t often run into lags and stutters, even during transitional animations.

While the performance gains of the CPU are impressive, Intel’s onboard HD graphics just barely makes the cut. Users will be able to play many of the games offered on the Windows Store app, but shouldn’t expect much more. Attempting to play a few Steam games didn’t have the best of results, and while I was able to play one or two, it was often laggy with extremely low frame rates. That said, the GPU does a decent enough job with HD video playback. Since the unit is a hybrid, the display portion only sports a 32GB eMMC internal storage. Thankfully, Acer has fitted an additional 500GB storage to the dock, which makes up for some of the bulk. The 32GB storage has an impressive 170MBps read speed, but a less impressive sub-100MBps. The 500GB, however, is slightly down on transfer speeds but doesn’t affect performance all that much.

In terms of the battery performance, the Aspire Switch 10 V has a 8060mAh Lithium Polymer battery, with an expected runtime of 6 and half hours. The unit actually easily reaches the 6-hour mark, but, while that might be good, it doesn’t match of many of the other hybrids, which achieve in excess of 10 hours of battery life. The Acer Aspire Switch 10 V is a much-improved hybrid over its predecessor. While there are still plenty of room for improvement, it is a step in the right direction for the company. At a recommended retail price starting at R8,999, the unit reasonably priced but faces stiff competition in this space. If not for the slightly low scores for the battery performance, and a bit of bulk on the display section of the unit, it would definitely be a contender for one of the top hybrids available on the market. The extra features added to the unit, the additional capacity in the dock and USB3.1 port, provide the prospective buyer with a future-proof device.