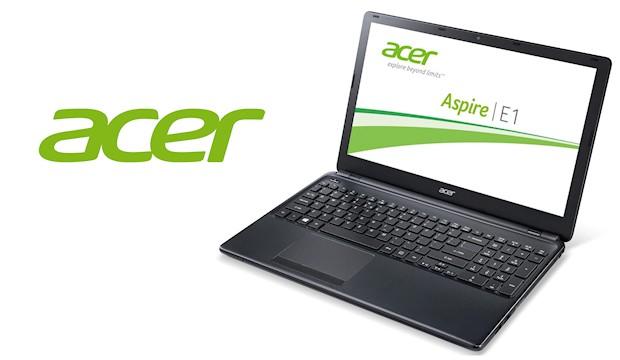 After the release of Windows 8 in 2012, much attention had been placed on touchscreen and hybrid laptops. With their touch optimised input and additional functionality, it’s not hard to see why such emphasis was placed on these laptops. There has, however, still been a good market for budget laptops alongside the juggernauts of the industry. There may be some level of stigma attached to any gadget branded as budget, but it isn’t necessarily all about cutting corners and delivering the bare minimum for pockets that aren’t as deep. Acer’s 15” laptop, the Acer Aspire E1 Series (E1-531), falls within the so-called budget category, but does it deserve such a heavy title as being budget? The Aspire E1-531 has a black, glossy plastic finish on the lid, which continues to the bezel surrounding the 15.6” display. While it may be plastic, there is a level of appeal, notwithstanding the black adds some elegance opposed to the standard grey/silver colour schemes we’ve become accustomed to. The keyboard desk, while also black, has a grainy, matte finish, whereas the area surrounding the touchpad is a glossy silver. It may look decent enough, but there are areas with a degree of flex that doesn’t indicate the same prestige we expect from higher priced laptops. The E1-531 measures 381.6x253x33.2mm (WxDxH), which is slightly larger than many other laptops within the same bracket, but also thinner than most. It also weighs 2.5KG, placing it on the lighter side within its category. The E1-531 is equipped with a 15.6” Active Matrix TFT Colour LCD display that provides 1366x768px resolution, which is more along the lines of adequate than outstanding. As with the surrounding bezel, the screen also has a glossy finish. It may look the part, but at times picks up unwanted reflections in brighter environments. In more preferable lighting conditions, the display yields detailed images, but lacks colour, while viewing angles caused colour distortion.

As with many entry-level laptops of today, the E1 makes use of Intel’s HD Graphics. The chip is capable of playing HD movies. The same cannot be said for running any modern games with any of the advanced graphics options turned on. As is always the case, the keyboard and touchpad are amongst the most important factors to consider when purchasing a laptop, more so a budget laptop. The E1-531 sports a full QWERTY-keyboard complete with a numeric keypad. Although the keys are adequately spaced, this is, regrettably, one of the only positives about the keyboard. The plastic coating of the keys doesn’t provide a premium feel by any means, while the pressure point of each of the keys makes for a more spongy, and noisy, typing experience.

The touchpad is placed off-centre to provide an easier resting position for your wrists while typing. The left side, however, has a lot less room for manoeuvrability. The touchpad isn’t as glossy as the left and right click buttons (which take the form of a single button), and also provides well-marked scrollbar on the right. The single-bar mouse button picks up left and right clicks toward the end third on either side, leaving quite a large dead spot in the middle. The touchpad is optimised for Windows 8 use, and although limited, provides swipe shortcuts that bring up right Charm bar, the options menu and switching between opened apps, depending on the gesture. The gestures, however, have to be quite deliberate, as quick movements tend not to register. Overall, then, the touchpad is a lot more user-friendly and better designed than the keyboard. In terms of its hardware, Acer’s E1-531 sports an Intel Pentium B960 64-bit Dual-Core CPU clocked to 2.2GHz, 4GB of RAM, and 500GB Western Digital HDD. In relation to the entry-level Ivy Bridge CPU, the Core i3 has roughly 70% more computing power than the B960 when results of benchmark tests are compared. There aren’t any noticeable lags during every day operational tasks. Running computationally heavy background tasks while still attempting to perform normal tasks, however, often yields less desirable results, but still isn’t as laggy as one would expect.

The device is fitted with a 6-cell 48 Watt hour battery, which provides a dichotomy with its results. In idle mode, the battery runtime reaches more than six hours, a fair performance. Other results don’t offer the same durations, as watching movies will drain the batter in just over three hours, and playing certain games or running the CPU at max for a sustained period of time yields a measly 80 minutes. Once completely drained, it takes roughly 90 minutes to fully recharge. Earlier it was mentioned that the Acer Aspire E1 Series (E1-531) was branded as a budget laptop, which is the case in the US, as it carries a reasonable $499 price point. On the shores of South Africa, however, the RRP is closer to R8,000, which moves it into the mid-range category; although it must be mentioned that there are a few more affordable deals ranging between R4,500 and R6,000. The laptop does provide the basic computing essentials you’d expect from a device in its category, while achieving more admirable results in some areas. If you’re in the market for a laptop that falls within the price range of the E1-531, be sure to conduct some level of research before your purchase, as you’re quite likely to find a few better deals on the market, specific to your requirements.