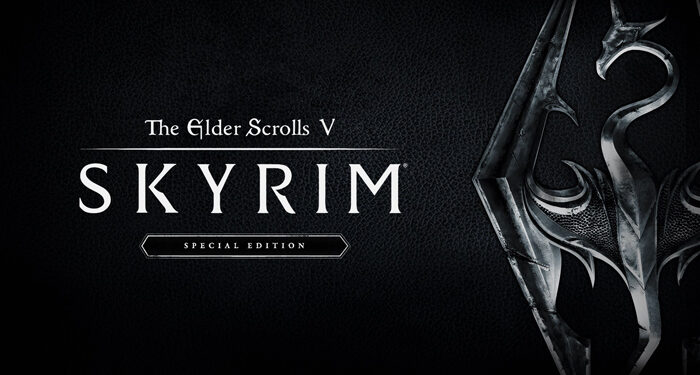 Just when you thought your addiction has broken, The Elder Scrolls V: Skyrim has risen from the last-gen grave to drag you down once again into its demanding embrace. But this time, it’s got its hair and nails did, its look updated and guuuurrrrrl, it’s ready to make you regret ever leaving it. That’s right, Skyrim has been polished up for current gen consoles (and that PC thing, too), and let me just say… Fus-Ro-Damn does it feel good to return to the world of Skyrim again! How I missed fighting dragons, overthrowing kingdoms, rendering the very heavens in twain with my voice alone to summon down the unbridled fury of the storm and more importantly… putting baskets over people’s heads so I can steal their potatoes. But… How has this re-experience been on my beautiful glacier white PS4? Sit down, young one, and I shall tell you.

[pullquote]In between this main adventure, you’ll find hundreds of other sidequests which are incredibly varied…[/pullquote]

The story of the Special Edition hasn’t changed at all and the main game still follows your character (whatever and whoever that may be thanks to a hefty character creation suite — all hail the Ninja Wizard Cat Person!) who starts off as a nobody on their way to an execution, but ends up a god-tier jack-of-all-trades-as-well-as-master-of-them-all -LOL-totes-OP-LOL legend, as you’re not only thrust into a civil war between the Imperial Legion and the Stormcloaks (which is making like a Lisa to a Tommy and tearing the province of Skyrim apart) but then suddenly dragons start appearing thanks to Alduin, a super pissed off OG dragon who is destined to destroy the world (as evident by his gamer tag, World-Eater).

Obviously, you have to not only help end this civil war, but stop Big Al as well by channelling the power of the Dragonborn. Yes, you have the power of dragons running through you (’cause your momma and a dragon maybe got drunk one night, put R.Kelly’s Bump & Grind on repeat and then proceeded to repeatedly bump & grind) and you’ll have to use it if Skyrim and the world are to survive. In between this main adventure, you’ll find hundreds of other sidequests which are incredibly varied and can be as simple as delivering a letter or killing witches so you can use their heads in an arcane ritual to cure werewolves. Included in Skyrim Special Edition are the three DLC add-ons, Dawnguard, Hearthfire and Dragonborn, which themselves have their own litle thing going on. Hearthfire is the least noteworthy of the… >puts on glasses<… lot, simply allowing you to build houses (for yourself, this isn’t SkyrimCities) and adopt kids with the only plot here being the one you can buy to build your homestead on. Dragonborn sees you travelling to a whole new island, Solstheim, and here, you’ll come into conflict with Miraak, an ancient Dragon Priest and the very first Dragon Born… So obviously he’s evil. Because tropes — and the final piece of DLC, Dawnguard, will have you flashing back to your #TeamEdward and #TeamJacob days as Harkon, a Vampire Lord, arises to bring about an ancient prophecy that will eternally black out the sun but the vampire hunters known as the Dawnguard ain’t having NONE of that. Nuh-uh. But you can change the tide of this little war by joining either side to stop the side who didn’t get a rose from you. Sun’s out, fangs out. Or sun’s out, crossbows out. Up to you.

[pullquote]Visually, the game looks much better than its original release…[/pullquote]

Hearthfire can die in a fire, but Dragonborn and Dawnguard add a ridiculous amount of content to a game which already has a ridiculous amount of content for a game, and you’ll get new quests, weapons, armour, locations and characters, as well unique features like being able to tame and ride dragons or turn into a vampire/werewolf, with both having their own unique perks and skills.

But you all know the story of Skyrim. You’re here to find out how the Special Edition looks and plays. So let’s get on that. Visually, the game looks much better than its original release, but remember, this is really an update and not a rebuild. The same textures and character models are still there, but they look a little crisper and a little better defined, but they really don’t compare to today’s calibre of games in terms of visual fidelity — however, it would be unfair to make that comparison. But, things like the new snow and water effects immediately pop — as well as the volumetric god rays, which turn areas into gorgeous vistas. Whether its moonlight shafting through the trees at night while Torchbugs dart around the foliage, or the rays of the setting sun hitting the peaceful river to create this wonderful, peaceful moment worthy of the fanciest postcard in your ouma’s collection. It was nice to just stop and take it all in… But then the mudcrabs pop up to give you a surprise vasectomy, ruining it all.

Gameplay also remains unchanged, and you still have access to some deep RPG mechanics. You’ll split your time between exploring dungeons, caves, ruins and cities, solving puzzles of varying degrees of difficulty and slaughtering your way through the world using swords, axes, maces, bows or various kinds of magic which range from simply shooting fire and lightning, to going invisible or raising the dead to fight for you and proving your aforementioned ouma right about games being evil. Or mix and match — flame roast that giant with one hand and then fillet him with your sword. Or just be a man and punch a dragon to death. Your body. Your perks. Your choice.

Doing so will level up related perks (using a bow levels up archery, a sword one-handed etc) and these vary from sneaking to combat to magic and much, much, much more. But whatever direction you go in terms of character build, thanks to the massive arsenal of weapons and armour (don’t like what’s in the game? Craft your own), no matter your play style, you’ll have no problem finding your gameplay groove.

And let’s not forget Dragon Shouts, which you’ll unlock by finding word walls throughout the game and these also start off simple, like a force shout which sends enemies flying back to shouts which summon a storm, striking and killing just everything. But you probably already know this. A Bethesda game review should have its own section dedicated to bugs, but I thankfully didn’t experience any issues aside from some fishes swimming on land (Alduin is the bringing about the end of the world, so I just chalked it up to #RevelationsThangs) and the Special Edition ran shockingly smooth during my play-through — the game runs at 30 FPS, and I didn’t feel it deviated to a notable level during my batrillion hours of gameplay.

But to me, the biggest thing is that loading times are non-existent, removing that internal debate of whether you should just accept that you ran out of lockpicks and you can come back for this loot later or reloading the game, wait 37 years, get married, have a child, watch that child grow up and during their 21st, you’ll take a short break to come home and check to see if the game has reloaded your earlier save. It was that bad on the PS3, but here, no such issue.

Oh, mod support. Yeah, there’s mods on consoles now, but the PS4 is limited, thanks to Sony’s policy of no external assets, meaning people will have to remix what’s already there, so don’t expect Thomas the Dragon Engine to pop up anytime soon. At the time of review, the mods weren’t as plentiful (best I saw was a survival mod where food is needed to survive and wounds need to be treated properly), but limited as they may be, the right ones will add a near infinite amount of playtime to a game that already has nearly that. TL;DR? Skyrim: Special Edition might not be the prettiest boy at the ball, but it looks good enough, plays fantastically, has a ridiculous amount of content — including all the previous DLC — as well as mod support — limited as it may be on PS4. For those wondering if the nostalgia will be enough to keep this game afloat in a sea of new releases, the answer is yes. No matter how many hours you sank into the original, you had fun and this time, it’ll be no different. And even for new comers to the series, curious about what the hullabaloo is about, this Edition is well worth it.