When you ask anyone about unique lightsaber variants, most people will mention Mace Windu’s purple lightsaber, but there is, in fact, many other strange and different versions of the classic Star Wars weapon.

As a kid of the ’80s, if anyone were to ask me what my favourite weapon was, I’d have to gleefully shout out, “Lightsaber!” There possibly isn’t a more recognisable weapon out there.

It’s a “sword” that not only carries with it a deep history and lore but also says don’t mess with me or I’ll cut you.

And while these weapons have become part of pop culture, with even my 3-year old being able to recognise them, there are some less familiar and unique lightsaber variants of the well-known Star Wars weapon out there.

Remember back in the ’80s, when the world was fascinated by everything ninja-related, every kid at our school wanted to own a shuriken?

The most prized weapon, however, was the expertly hidden cane sword, as seen in the 1989 movie Blind Fury. For those who aren’t as old as I am, the weapon basically featured a standard sword that could to be slid into a shaft that resembles part of a cane, thereby fooling your opponents into thinking that you were unarmed.

The Sabercane follows the same basic premise and allows a Jedi (or Sith) to conceal their weapon during diplomatic missions or just to fool their opponent into thinking they are unarmed. While not many Jedi and Sith are known to have carried these concealable lightsabers, the Jedi Tera Sinube and Sith acolyte Haanzen both wielded a Sabercane.

Haazen used a Sabercane out of necessity, since he was not permitted to possess a lightsaber by the Jedi Council and adopted it as a way to hone his saber skills without their knowledge.

Tera Sinube’s Sabercane hilt was made out of wood from his homeworld. The bonus of using the Sabecane was that the shaft of the weapon could also be used for bludgeoning pesky Stormtroopers.

As far as unique lightsaber variants go, this one is pretty cool. 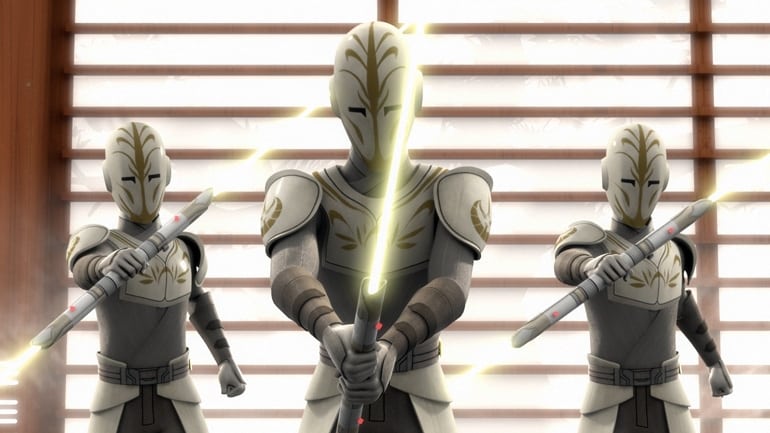 While the fighting style of those using a pike can be nearly identical to that of someone using a double-bladed lightsaber, the latter is far deadlier to both the target and the wielder as one wrong move could result in a missing limb. 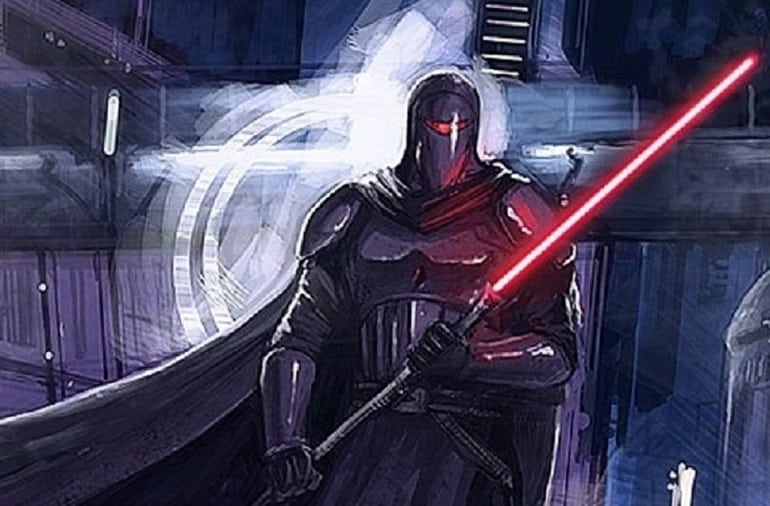 One makes the Pike so different from other unique lightsaber variants is that the long shaft was usually constructed out of phrik alloy, a very rare metal and one of the few lightsaber-resistant materials out there.

Of course, the fact that the weapon only has a short lightsaber at the end meant that deflecting loads of incoming blaster fire was near impossible. Luckily, Stormtroopers tend to miss.

Lightsaber pikes mostly came in two types, one fitted with a standard phrik alloy blade and the second making use of a secondary short lightsaber blade (similar to what Darth Maul uses) giving the wielder more offensive options in combat. 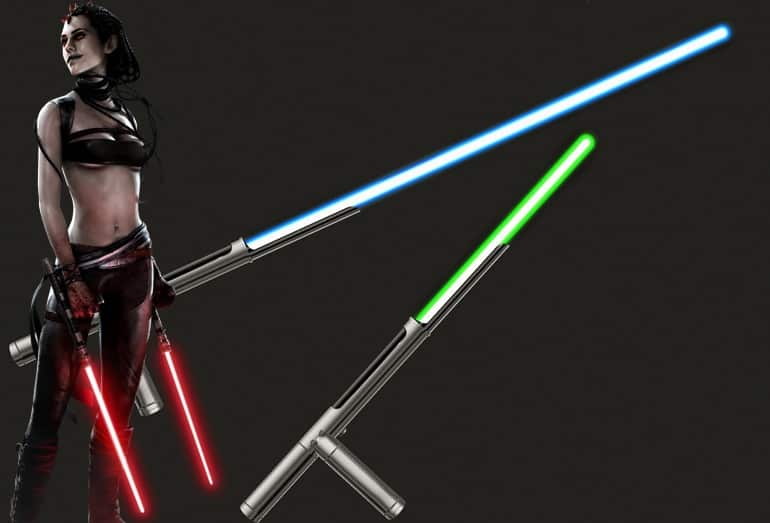 Mortal Kombat‘s Stryker looked awesome wielding his dual tonfas (nightsticks/ batons). But, remember how absolutely useless they were in combat due to their short-range?

The same can be said for the lightsaber tonfa, which admittedly is probably one of the most bad-ass looking lightsabers on this list. However, wielding them successfully tends to be a lot more trouble than it’s worth. That’s probably the main reason why we hardly ever see these on the battlefield.

The short perpendicular lightsabers had a second handle extending 90 degrees from the main hilt. These extended handles allowed the wielder to block incoming lightsaber strikes more effectively. Most lightsaber tonfa wielders used a variety of blocking, countering and jabbing techniques, making them deadly in combat.

There have only been two known users of these types of lightsabers, namely the Jedi Padawan Maris Brood and Sinya, a Black Sun member.

Unlike other unique lightsaber weapons, the tonfa requires their wielder to get up close and personal with their foe, which can be dangerous if they aren’t versed in the use of these weapons. 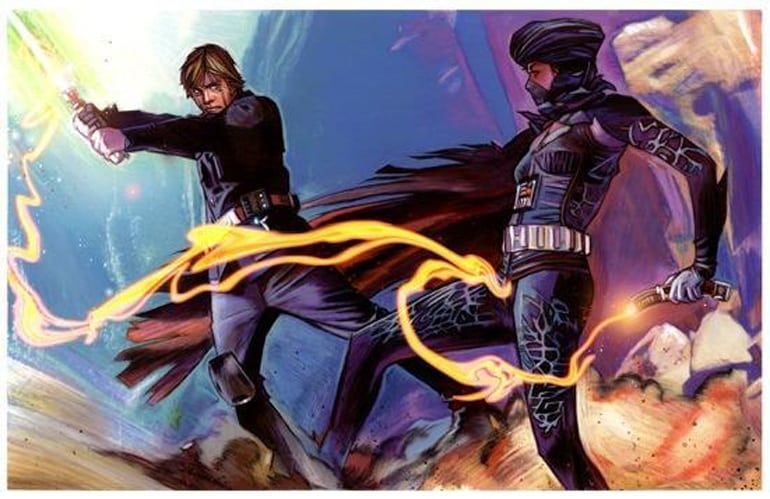 Another rare and unique lightsaber variant is the lightwhip or laserwhip.

Again, just as in the case of the lightsaber tonfa, lightwhips take a certain amount of skill to use as flailing beams of pure energy can be hazardous to both the wielder and their foe.

Most of the lightwhips found in the hands of both Sith and Jedi tend to be single beamed, although there have been variants with multiple energy beams being emitted from the main hilt.

With its abnormally long reach, defending against a laserwhip attack is difficult, even for a seasoned Jedi Master.

While it was a formidable weapon, its extended length meant that it was weaker than your standard lightsaber weapons. This made successfully penetrating material, such as Durasteel armour, difficult.

Due to this inherent weakness, some lightwhip wielders would include additional tassels, composed of various solid materials, to help increase the weapons damage capabilities. Probably the weirdest and most unique lightsaber variant on this list, the double-bladed spinning lightsaber was specially designed for use by the Inquisitorius, a group of Dark Side adepts entrusted with enforcing the will of the Empire.

What makes this lightsaber so special is that it is capable of emitting one or two beams of energy.

When both these blades were activated, the hilt would allow them to spin rapidly letting the wielder attack more ferociously while still maintaining a degree of control.

Now, just like some of the other variants, one wrong move or out of place appendage could see the wielder losing a finger or a whole arm.

One big design flaw of the double-bladed spinning lightsaber though is that when the blades are spinning the central part of the weapon is left open to attack.

This means that a swift strike to the main disc could completely destroy the weapon. It’s basically a case of a very imitating and scary-looking weapon having one problematic flaw, which when exploited could cut the battle short (quite literally).

Having a glaring flaw in their weaponry is something the Empire seems to excel at. You know, like the thermal exhaust port of the Death Star. 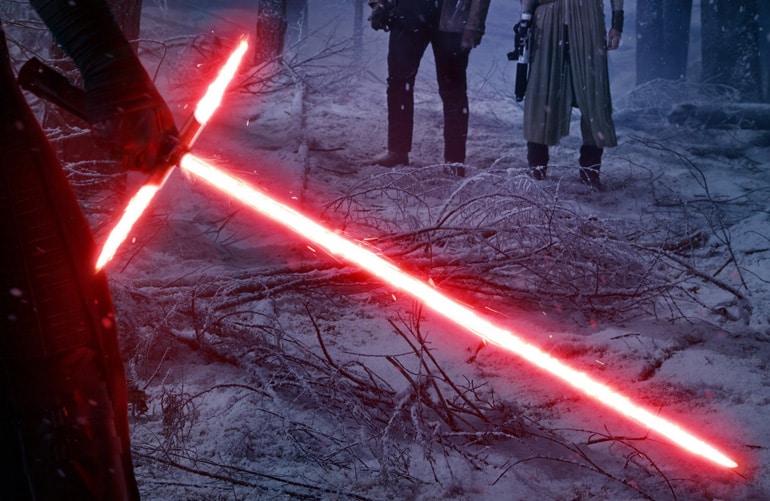 Mentioned in Star Wars lore way before Kylo Ren made it famous, the crossguard lightsaber design goes back to the Great Scourge of Malachor — a battle which took place between the Jedi Order and the Sith Empire on the planet of Malachor.

While the weapon might not look as outlandish as some of the other unique lightsabers on this list, it is considered a very rare weapon. 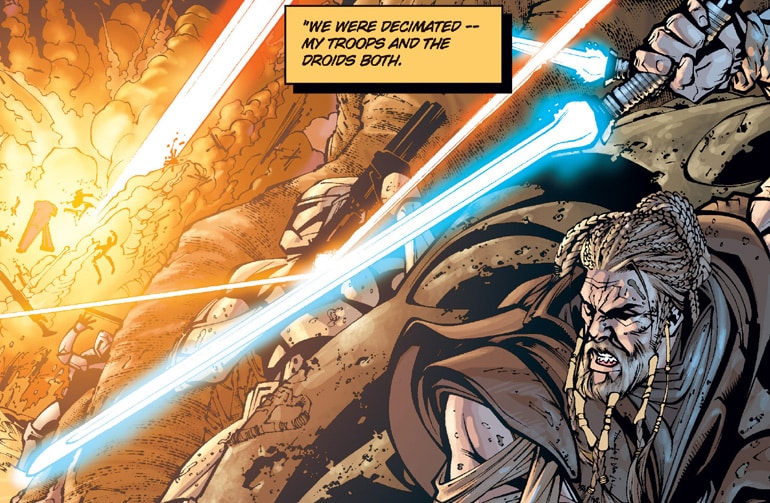 Looking very similar to a medieval great sword, the crossguard lightsaber consisted of a primary blade and two power vents known as quillons. These quillons (vents) acted as a method of expelling excess raw energy from the central blade.

Now, you might ask why these burst of raw energy does not disarm the wielder? To protect the user’s hand (and appendages) the quillons each made use of an emitter shroud.

In the case of Kylo Ren’s lightsaber, the quillons played an even more important role as his weapon makes use of a cracked Kyber crystal (these give the lightsaber the ability to emit energy beams).

This means that the vents also helped expel and divert extra heat generated by the crystal.

Besides Kylo Ren, Jedi Roblio Darte also wielded a variation of the crossguard lightsaber, which had only one vent instead of the more familiar two. 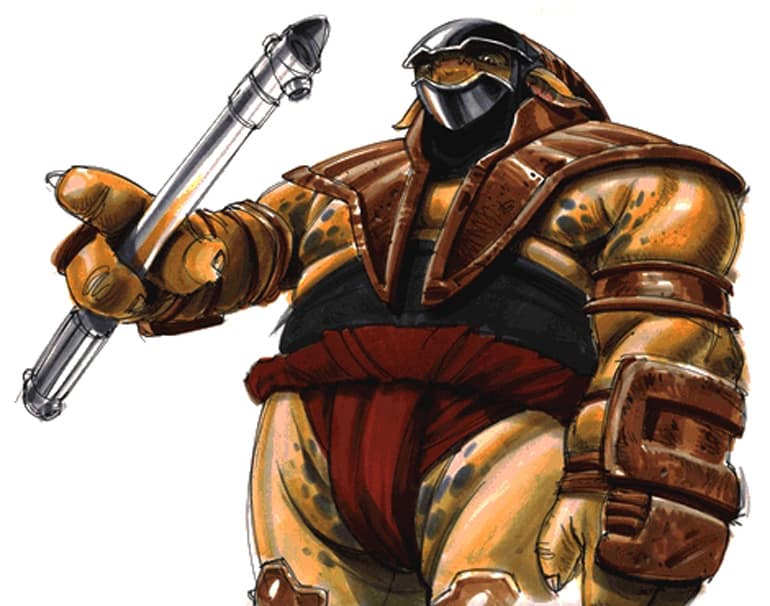 As the old saying goes, “If you can’t beat them, then beat them to a pulp with an even bigger weapon”.

The aptly named lightclub, or the greatsaber, functions similar to a regular old lightsaber, except that it can have a blade of up to three meters in length. Who says size doesn’t matter?

First used by the Revanchists during the Mandalorian war, these absolutely huge lightsabers were able to emit such long blades due in part to special focusing crystals. They were developed to help cut through Mandalorian iron, an extremely durable material.

Being so large in size, the lightclub lightsaber is a unique weapon only used by those skilled enough (and strong enough) to manage its overwhelming size. As can be expected, those large enough to wield these weapons preferred a more aggressive fighting style, basically beating their foes into submission.

The mutated Gamorrean Dark Jedi Gorc was famous for using a lightclub, which perfectly complemented his love for fighting.

8. Protosaber – Back To Its Roots 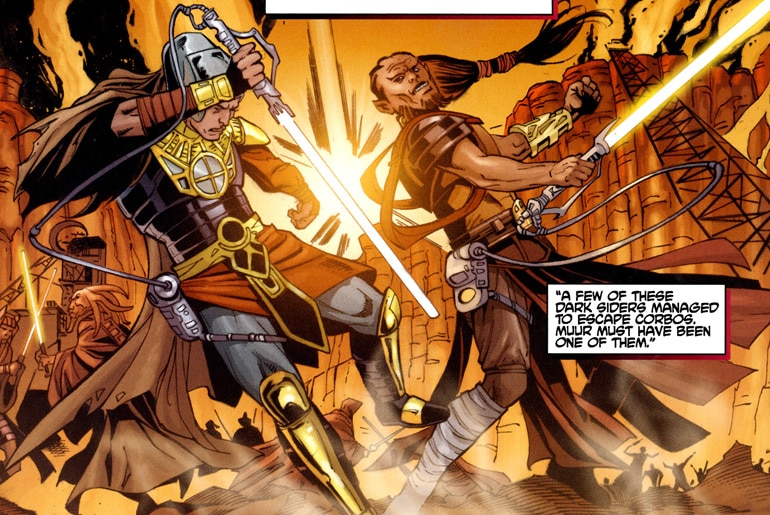 Every great invention usually starts with a not so great prototype, and the lightsaber is no exception. These protosabers made use of an external power pack connected to the saber’s hilt.

Not only were they difficult to use (as trying not to cut your own power cord was sort of essential), they tended to run out of power fast, limiting their effectiveness. Although being really unpractical and limiting the user’s mobility, these primitive lightsabers still packed a punch, unlike anything else seen by the Jedi or Sith before.

Protosabers were widely used during the Hundred-Year Darkness and Great Hyperspace War by both Jedi and Sith. Naturally, just like your shiny new iPhone 8 will eventually be replaced by the bigger and better iPhone 9 so too was the Protosaber replaced as improvements in technology and materials meant smaller power sources.

While the lightsaber (and its unique variants) quickly replaced the protosaber, there were still those that kept using upgraded versions of the old design called retrosabers. These weapons, while still retaining many of the protosaber’s weaknesses (such as the external power pack), had the ability to emit a short power surge, creating a more powerful blade for a short period.

Which is your favourite unique Star Wars lightsaber? Are there other variants we have missed from our list?

ADVERTISEMENT
No Result
View All Result