It’s difficult walking in the shadow of greatness, especially when that shadow belongs to The Dark Knight himself. Dick Grayson (Nightwing) has always had it tough, losing his parents at a young age and grown up by a man who himself was robbed of his childhood.

Any normal kid would break under these circumstances, but the Boy Wonder isn’t any normal kid. After years of kicking ass at his side, Dick Grayson was asked to vacate the position of Robin by the Caped Crusader eventually creating one of the greatest superheroes of all time… The eskrima stick wielding, paragon of justice Nightwing. Here are 8 things you didn’t know about Batsy’s padawan… During the events of Nightwing: Year One, Batman fires Robin and forbids his return to Gotham. Not knowing what to do or where to go next, Dick goes to Metropolis to visit Clark Kent, deciding it was time to get out of the dark and try his luck in the light.

While visiting, Dick helps stop a terrorist attack and seeks advice from Superman. Dick asked the Man of Steel: “As an objective observer of the human race, what made you take this route?” Superman takes Dick to the Fortress of Solitude and tells him the story of a Kryptonian hero, who fought for justice and used his talents and skills to fight for those who couldn’t fight for themselves.

Being an outcast, he hoped to prove his worth to his family by showing them that he was better than what they had given him credit for. It was a story Dick felt he could relate to and later decided to adopt the name of the Kryptonian legend, Nightwing. During his investigation, Dick finds a defenseless city, similar to what Gotham was before The Caped Crusader existed, brimming with corruption to the highest levels of power. It seemed to be that whatever was too vile for Gotham, would end up in Bludhaven. Appalled by the crime and corruption, Grayson realizes that the city needs a protector. He chooses to remain in Bludhaven allowing him to be close enough to Gotham to still be part of the Bat Family, and far enough as well to have his own city, adventures, and enemies.

3. Bartender by day, vigilante by night!

Every superhero’s alter ego needs a job right? Dick Grayson went through a variety of jobs in his early Nightwing days, first starting outpouring pints at a cop bar. Grayson being an ‘aspiring writer’ got a job as a bartender in the cop bar as part of his full-time profession, to investigate the crime and corruption in Bludhaven. He later joins the Bludhaven Police Department in an attempt to get rid of the corruption of the city from within, working on both sides of the law as a police detective and ass kicking avenger Nightwing! 4. Deathstroke the Terminator’s daughter was trained by the Boy Wonder!

In Nightwing #112, Grayson dons a new suit and takes on the name of Renegade teaming up with long time arch nemesis Deathstroke while infiltrating Lex Luthor’s Secret Society of Super-Villains. Uncertain about Dick being a villain, Deathstroke requests Dick to teach his daughter Ravager all the skills he possesses. Renegade trains Ravager, taking her out on many missions, but eventually Ravager grows suspicious and accuses Dick of still being a hero.

Deathstroke unable to trust Grayson, sets up a surprise meeting with the Man of Steel, placing Kryptonite in Ravager’s missing eye. While in battle with Supes, Ravager slips off the building and Superman catches her in spite of her being a Kryptonite enhanced assassin. Dick explains to Ravager that even though Superman’s life is in danger he’s still thinking of others before himself. This almost convinces her to become a hero until Nightwing makes a deal with Deathstroke that he’ll stop teaching Ravager to be a hero if Deathstroke leaves Blüdhaven alone. 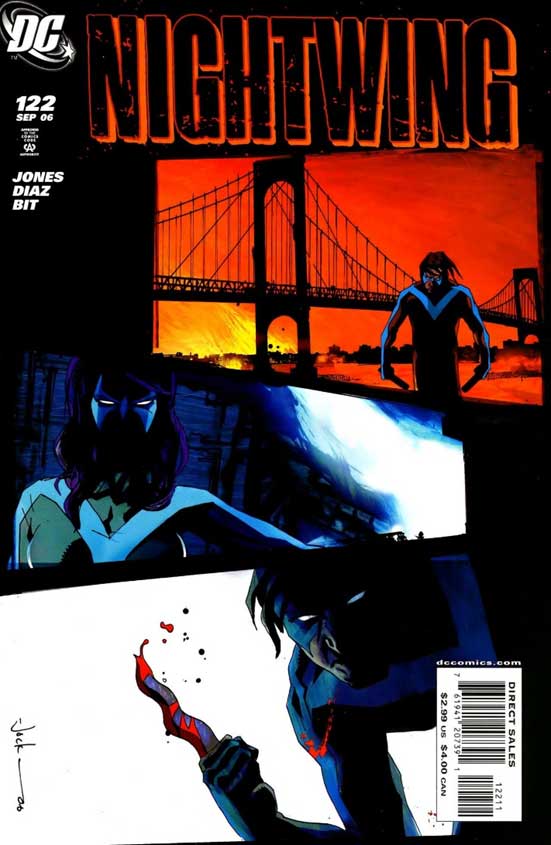 5. Will the real Nightwing please stand up?

Dick relocates to New York City in the hope of finding a better life, beginning a relationship with fashion designer Cheyenne Freemont who later turns out to be a meta-human in hiding. He also discovers that there is another Nightwing in town, one that doesn’t shy away from killing. Now branded as the most dangerous criminal in New York, Dick goes to find the imposter. Before going on he is attacked by two-meta humans known as the Pierce Brothers, caught and defeated.

Dick is rescued by the other Nightwing, who turns out to be Jason Todd. The two battle and Jason wins after injuring Dick’s hand. As if Dick didn’t have enough on his plate, Cheyenne discovers Dick is Nightwing and begins following him, taking on his name with an alternate costume. Jason gets captured by the Pierce Brothers and, naturally, the two “Nightwings” go to his rescue.

After a tough battle, the duo is able to defeat the brothers and save Jason Todd. In the end, the imposters return to their ordinary lives, leaving the one true Nightwing as protector of New York City.

6. The Dark Knight’s protégé might just give him a run for his money!

Dick, like his mentor, is highly intelligent and a master detective. He was officially mentioned as being the second to Batman in detective ability in the second volume of the DC Comics Encyclopedia. Dick has also been trained in escapology, criminology, stealth, disguise and his martial arts skills rival those of The Dark Knight. He is regarded as the greatest human acrobat in the DC Universe. He can also speak various languages fluently, and he once hacked alien technology using Tamaranien language. He has been able to solve the Riddler’s riddles before Batman many times, even as Robin.

If that doesn’t prove his brilliance, while working as an agent for Spyral, he learnt how to use one of Spyral’s abilities called “Hypnos” which allows the user to manipulate people and their memories which according to Huntress usually takes years to master. During the events of “JLA: The Obsidian Age”, the Justice League disappears on a mission to investigate what happened to Atlantis and Aquaman.

Fortunately, The Dark Knight is always one step ahead of everyone and has a backup plan in the event of the Justice League disappearing. He builds up a team of heroes which include the Atom, Green Arrow, Hawkgirl, Etrigan, Firestorm, Faith and the former villain Major Disaster with Nightwing to lead the new Justice League until the original members are found.

At the end of the arc, the new Justice League finds and rescues the previous one. These two teams combine to form one larger Justice League; however, Nightwing returns as the Titans’ leader and to the Justice League’s reserve list.

8. Dick Grayson was once the Clown Prince of Crime!

In the deep future of Frank Miller’s acclaimed Dark Knight Strikes Again, Dick Grayson has sold out to the corrupt government trading in his good name in a selfish gesture for money and respect. He is injected with a serum that drives him insane but also gives him a powerful healing factor. Driven by insanity, Dick takes up the mantle of Batman’s greatest foe, the Joker. Grayson is ordered by Lex Luthor to assassinate superheroes, he kills Guardian, Martian Manhunter, Creeper and nearly kills The Question before he is interrupted by Green Arrow.

He then goes after Green Arrow, almost killing him until Catgirl defeats him. After his superiors are murdered by the last of the Justice League, Dick returns and goes after Catgirl, beating her within an inch of her life before Bruce Wayne confronts him. Bruce briefly fights, humiliates and eventually decapitates Grayson with a hatchet before pushing him into the volcanic caverns of the Batcave. 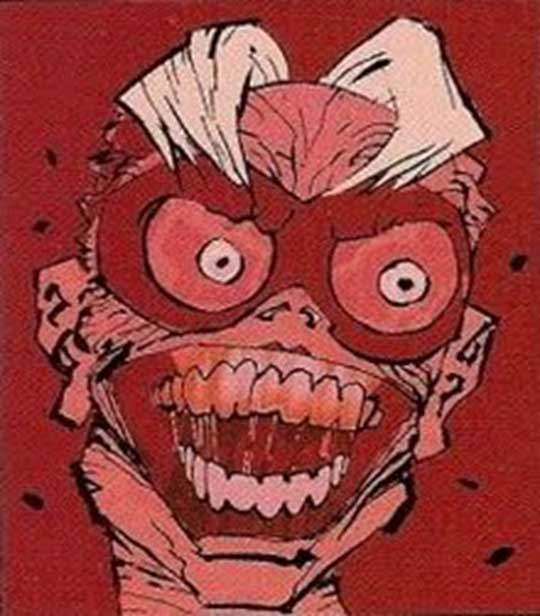