6 Things You Should Know About BioWare’s Anthem 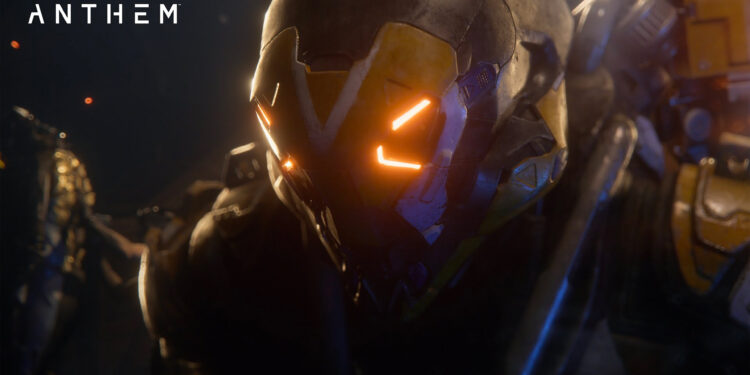 When BioWare’s next game Anthem, the game that lets you fly around in awesome mech suits, was announced, fans of the developer were perplexed. A studio that is widely known for their exquisite narrative driven single player games were developing an online multiplayer focused game in the same vein as Bungie’s Destiny franchise. However, after seeing more of the game and its world it’s clear that BioWare is attempting to take the online multiplayer loot-and-shoot genre and swirl in a good dose of narrative-driven experiences for both single and multiplayer fans. So, can they pull this off and prove their critics wrong? Before you decide for yourself here are a few things to know about BioWare’s Anthem. 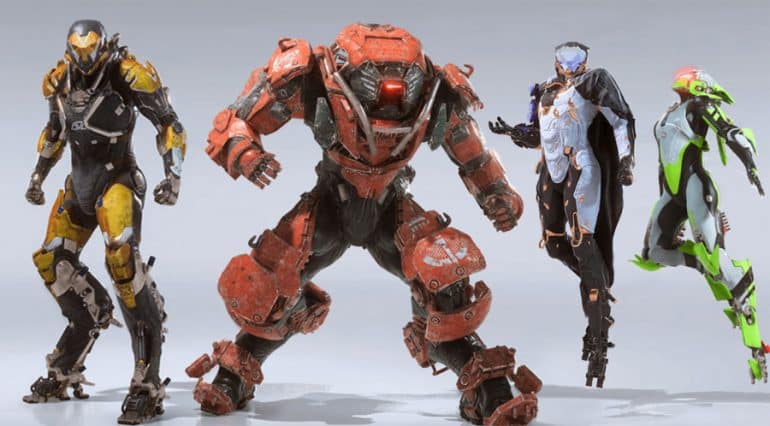 The world of Anthem is a dangerous place and venturing outside Fort Tarsis (your base of operations) isn’t for the faint of heart. As protection from the dangers the world has to offer, players will be donning one of four Javelins suits. Basically, rudimentary versions of Iron-Man’s armour. Each of these Javelins has their own playstyle and controls differently in both combat and traversal. The four Javelins that will be available in the game initially are:

The Colossus – A suit for those that like to shoot first and ask questions later. It’s heavily armoured and is the only Javelin that can use heavy weapons. It has a deployable shield to help it soak up all those enemy bullets before blowing them away with its high explosive mortar.

The Ranger – Your jack-of-all-trades, the swiss army knife of Javelins. This is the most versatile Javelin, capable of taking quite a beating yet still being manoeuvrable enough to dodge incoming fire. Thanks to its arsenal of various grenades the Ranger is capable of clearing out areas of enemies very effectively.

The Interceptor – Think space ninja and you might get an idea of how the Interceptor functions. It’s fast, highly manoeuvrable and loves getting into the thick of things, dealing large amounts of damage and then leaving the fray before things get too hectic.

The Storm – Basically the space mage, uses seal technology to power its various elemental attacks. Considered the game’s glass cannon, the Storm uses powerful area of effect attacks to take down his enemies, always making sure not to sustain too much damage.  It also has the ability to hover much longer than the other Javelins making it deadly from above. 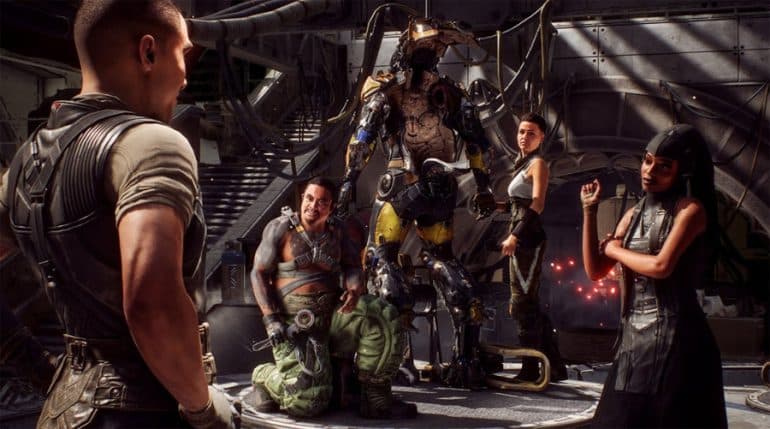 After the Gods mysteriously disappeared leaving behind their tools, which harnesses the Anthem a pure source of creation, humanity has struggled to survive the savaged and seemingly in-complete world, carving out their existence in Fort Tarsis, one of the last bastions of humanity. Now, an old foe has begun to rise once again as the Dominion has started to rise in the North. They want one thing and one thing only and that is to control the Anthem and use it to subjugate the rest of humanity.

As a Freelancer, one of those cool Javelin wearing dudes, you are tasked with protecting Fort Tarsis by venturing deep into the world and trying to stop the Dominion at any cost.

BioWare has stated that they are working very hard in giving players, whether they play alone or with friends, a truly narrative-driven experience. While we don’t expect the game’s story to be nearly as deep as those of previous BioWare games, the developer has been quite open about just how much your decisions and actions will affect your experience. Fort Tarsis is where the single player part of the game takes place. Player’s will be able to interact and help its various citizens. As you complete more and more missions Fort Tarsis will begin to evolve, this is BioWare’s way of making you feel invested in the story and seeing your actions having repercussions, although there will be no branching narrative such in their previous BioWare games.

Anthem will allow players to change the loadout of their respective Javelins to suit their specific playstyle. And while each Javelin does sort of have a pre-defined role (such as the Colossus being the tank) there is still a lot of flexibility in how you can set-up each Javelin’s abilities. Figuring out which builds would complement the rest of your team’s is crucial if you want to deal as much damage as possible. Each Javelin will have three gear slots, two weapon slots and six component slots. Players will be able to save 5 types of builds making switching between these quickly, a breeze.

Anthem will separate cosmetics from gear meaning that you will be able to change the look of your Javelin without it affecting your perks or armour score. Gear will also come in multiple rarities such as common, uncommon, rare, epic, masterwork and legendary. Some gear pieces could have inscriptions on them which will give players various bonus effects.
Each Javelin will also have abilities to choose from depending on what build you are going for. 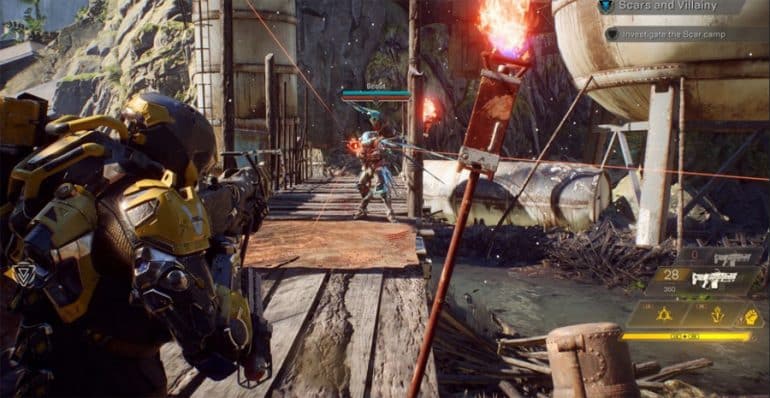 As a Freelancer, you’ll be tasked with beating the living daylights out of various enemies and creatures. This means you’ll need access to an arsenal of weapons. Anthem will have all the weapons you’ve come to expect in games such as these, from heavy machine guns to hand pistols and even sniper rifles with most weapons having some sort of perk attached to them depending on their rarity. While exploring the world players will find various crafting materials and blueprints which can be used to craft new gear and weapons. BioWare has mentioned that crafting should be seen as a way to supplement your build making sure you have an alternative, albeit more difficult way, of getting that gear piece or weapon you want. The game also features a combo system where players can “prime” enemies using specific abilities and then “detonate” them using another ability dealing huge amounts of damage.

Looking cool is an important element of loot-and-shoot games and BioWare is well aware of this, especially with Anthem. Not only will players be able to change the colour of their various Javelin armour pieces and add decals, but they will even be able to change the specific material type that each armour piece is made of. Now, BioWare has admitted that the game will have microtransactions (boo!) but that these will only be cosmetic in nature, even going as far as to state that all future story DLC would be free to those that bought the game. 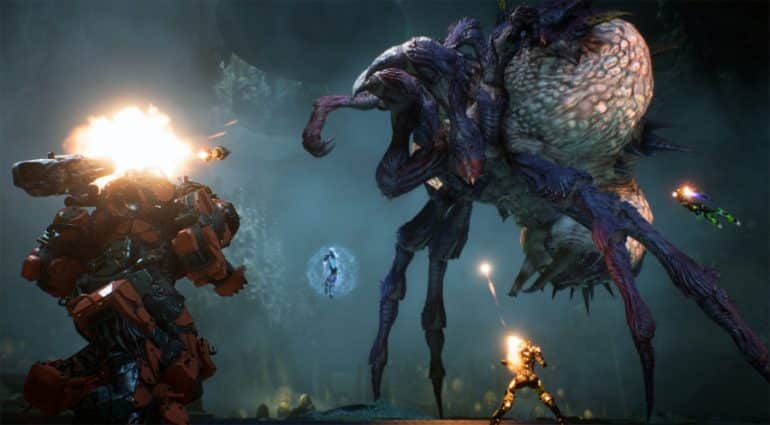 What will keep player’s coming back for more once the critical path has been finished? BioWare has stated that the Anthem will have six different difficulties tiers: Easy, Normal, and Hard, with the other three Grandmaster difficulties being unlocked when players reach level 30. Playing on harder difficulties will increase the chances of getting better loot drops. There will also be Strongholds to explore and Legendary contracts to complete. 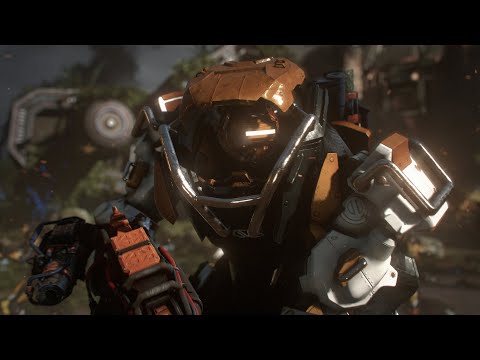