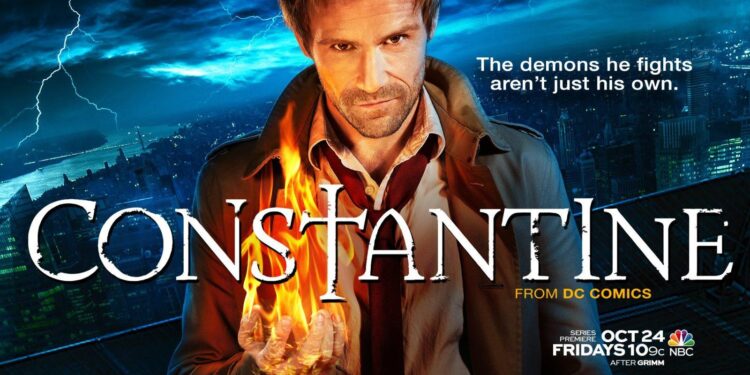 When a show is on the verge of cancellation, you’d think it would make sense to go out with a bang. Take one last gamble. Roll the dice. Throw everything you’ve got at that final episode, no matter how insane it may seem, and make fans beg for more. Constantine, sadly, didn’t. The season finale of Constantine looked beaten, tired and like a show that had surrendered. His battle against “The Rising Darkness”, so full of potential, was capped with a standard story of a redneck who kidnaps little girls and marries them. There were some minor subplots, a return of Jim Corrigan who still isn’t as impressive as The Spectre, and a weak twist that we saw in the Constantine movie – only done better!

The fans who have supported this series deserved better. If this truly is the end of the series, they should have pulled the trigger on some big moments and created a cliffhanger like no other. Since they didn’t, it’s time to do the job for them…

Constantine, Zed, Corrigan and Manny are congratulating themselves at the New Orleans bar, having resolved their latest case. The bar begins to shake, the walls collapse around them and a beam from the ceiling hits Corrigan on the head, killing him instantly. Wide-eyed, our heroes look outside and see giant monstrous hands of darkness and fire approaching over the horizon, the skies turning red and millions of people dying as demons begin flooding the Earth.

With a close-up of Constantine’s face, he lights up a cigarette and utters one word: “Bollocks.” As the camera swings behind him, he flicks his right arm down to his side like a gunfighter and triggers a blue flame around his hand. It looks impressive… until we see the sheer scale of The Rising Darkness across the landscape. After their victory against The Man, our heroes leave the bar and split up for the evening. Corrigan and Zed return to his apartment, but are attacked by a mysterious group of hooded men who inject them with tranquillizers. Corrigan groggily regains consciousness, finding himself stuffed into a steel barrel. Concrete is them poured into the barrel with him, the drum is sealed up and then dumped into the river. Zed meanwhile wakes up strapped to a chair, having been returned to her father’s cult The Resurrection Crusade.

Manny visits Papa Midnight, calling off the bounty he put on Constantine. Instead of being surprised, Midnight simply says, “I haven’t been working for you…” Manny looks confused and tries to fly away, but for some reason, he can’t. He’s been double-crossed by someone far worse, as Papa Midnight summons up the spirit of Trigon. The demon appears and rips Manny’s wings from him.

Constantine himself relaxes in his hotel room. He gets a phone call from Chas at Jasper’s mill-house and they talk briefly before Chas mentions that something’s missing from the one of the shelves. Constantine says, “I know,” and pulls out one of the Eclipso black diamond shards from his pocket. As the trademark darkness eclipses his face and he grins maniacally, he adds, “Boom.” In a final shot, the mill-house explodes, with the sound of a possessed John Constantine laughing evilly.

3) The Who Shot JR? Cliffhanger:

The scene is outside the bar, and John has just relieved himself up against the wall. Manny has just told John that they can win this war, and John gets in his face about how his real plan is what he’s going to do once he’s sent every last demon back to hell. Manny leaves, releases Papa Midnight from police custody and calls off the bounty on Constantine, and adds, “I need him alive.”

Back at the bar Zed says her goodbyes to Corrigan saying she needs to make a call, leaving him to wonder what else the night holds in store. Outside, we see Constantine walking down the road in the rain and walks past a phone kiosk. It starts to ring. Constantine looks at the phone curiously and approaches it. He answers the phone but we don’t hear what’s being said on the other side. John’s eyes open wide with a sudden realisation at what he’s hearing.

Suddenly from nowhere a bolt of lightning strikes, hitting John directly and causing the kiosk to explode. From above we see the apparently-dead John Constantine lying in the road, and the rain instantly ceases. Our heroes are at the bar and discussing what comes next. Corrigan and Zed begin to get cosy, and Constantine checks his watch. “Bugger,” he exclaims. “I’ve got a date.” Leaving behind the confused couple, he races out of the bar and rudely brushes off Manny’s attempts to talk to him. Manny eyes him suspiciously as he races off into the night.

We next see John Constantine standing by a deserted roadside overlooking a lake. Chas’s familiar cab pulls up, and Chas and Liv emerge. “What’s going on, John?” Chas asks. John grins and says, “I’m not trusting any of those buggers. That last case had sod-all to do with the Rising Darkness. Liv, are you sure this is the place?” She nods, and replies that it’s what she’s been working on since they parted company months ago. She’s sure.

From the lake, the figure of Swamp Thing slowly emerges. John checks his watch again. “Do you have any bloody idea how long I’ve been waiting for you?” he accuses the green elemental being cheekily. “You’re closer to this planet than anyone I know, sunshine. You know what’s going on, give me their name.” We see Swamp Thing’s face up close and in his deep, slow voice he says, “Arcane…”

5) The Frame Of Mind Cliffhanger:

Zed and Corrigan share drinks in the bar as John snarkily rejects Manny’s pep talk about how things are going well. John thinks about it for a moment, considering the situation. “That’s just the problem,” he tells Manny with suspicion. “I’ve never been that lucky. It doesn’t make sense, none of it.” Manny protests, accusing John of being paranoid. Constantine doesn’t listen, pushing Manny back and casting a spell. Manny shatters into a thousand pieces, the illusion destroyed.

Like waking up from a hangover, he shakes his head and stares at the world around him. He chants another spell and all of reality shatters, replaced with a bright white light. As he holds up a hand to shield his eyes he makes out the blurred images of people wandering around, film cameras and a studio set. The director yells at him that he’s going off-script, and that he’s ruining the shoot. He tries to get his bearings as it’s explained that the whole thing is nothing more than a television series. He refuses to accept that and casts another spell.

Once more reality breaks apart and he’s back in The Man’s house, confronting the three young brides who are casting a spell on him. As the camera moves around, the room shifts and becomes the Ravenscar mental asylum where John’s being studied by three doctors.